The annual night of special recognition for Ziebach County 4H members returned this year, after not being held last November. During the event, held on November 19th, the 4H members and leaders enjoyed a supper, awards, a presentation about 4H Performing Arts Camp by Zoey DeLaRosa, and a photo collection by Patty Peacock that presented pictures from the 2020 and 2021 Ziebach County 4H year’s activities was enjoyed.

After the meal, the program opened with the Flag Salute and 4H Pledge and 4H Member record books and t-shirts were given and Phoebe Lemke recognized the 4H leaders (Nila Woodward, Kim Bachman, Patty Peacock, and Julie Thorstenson).  Next, Peacock and Woodward presented the awards earned by the members.  Trophies are given for winning the position of Grand Champion or Reserve Champion (first and second place in each division) in areas such as Foods & Nutrition, Horticulture, Shooting Sports, Hobbies & Collections, Home Environment, etc., and many more as there are numerous areas that kids can participate. In order to win a trophy, a 4H member must submit a completed 4H book for the year and win at least one purple in that category and then additional ribbons earned are calculated and compared between members and those with the most ‘points’ earned are awarded Grand and then Reserve. In case of ties, demonstrations done or involvement in that project area is considered.

Participation plaques for those members that qualified and competed at the state level in shooting sports or rodeo were presented as well as the prestigious Mercedes Lemke 4H Award. The award is in memory Mercedes Lemke who was a 4H leader and a pioneer in getting many of the programs/project areas that we have today started in our state. For a first time, two 4H members were recognized Erin Lemke was the 2020 recipient and Alan Lemke is the 2021 recipient. The 2021 scholarship from the Ziebach County 4H Leader’s Association was awarded to senior Erin Lemke (Malory Peacock, who could not be present because she’s at college, was the 2020 scholarship winner). 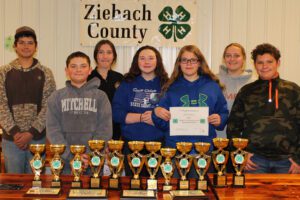 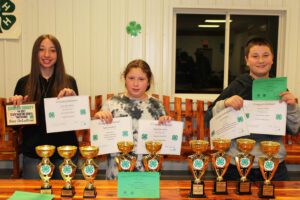 PHOTO BY PATTY PEACOCK The members of the Mustangs 4-H Club, advised by Patty Peacock, with their 2021 awards. (L to R): Zoey, Gabriella, and Rio DeLaRosa. 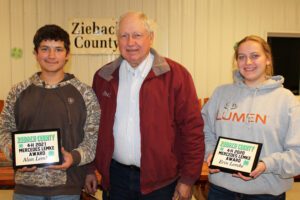 PHOTO BY PATTY PEACOCK For the first time, because of the event honoring 2020 and 2021, there were two 4H members presented with plaques for being chosen for the honor of receiving the Ziebach County 4H Mercedes Lemke award. The award is in memory of Mercedes Lemke who was a foundational person in the county and state 4H programming. (L-R): Alan Lemke-chosen for the 2021 4H year, John D Lemke (one of Mercedes sons), and Erin Lemke–chosen for the 2020 4H year.