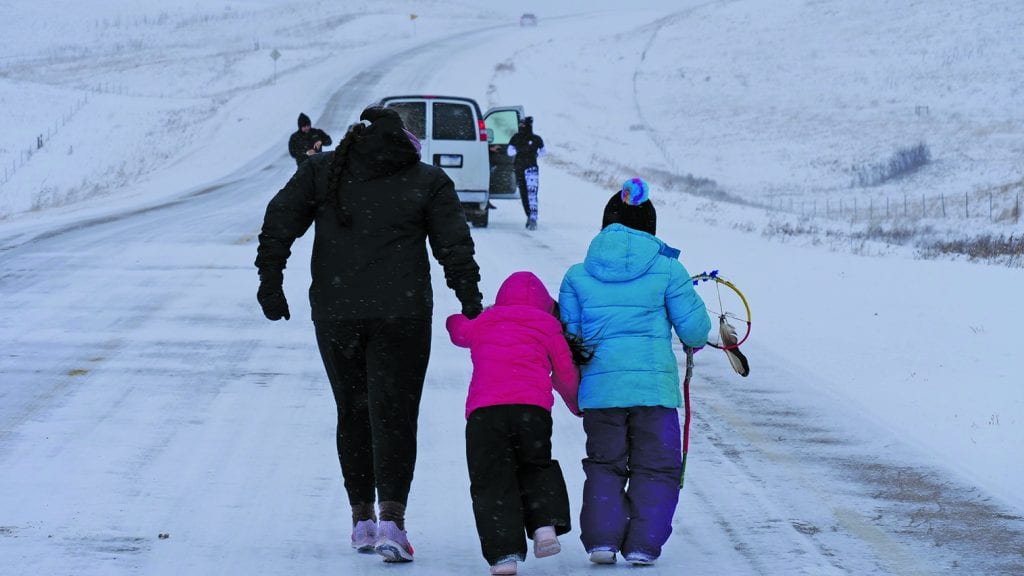 On December 15, 1890, Hunkpapa itancan Sitting Bull (Tatanka Iyotake) was killed on the Standing Rock Agency by Indian police at his residence along the Grand River. The respected leader’s murder sent shockwaves throughout the Lakota oyate, and a group of his followers, who feared they would be targeted next, fled the agency to seek refuge and guidance from Mnicoujou Itancan Hehaka Gleska (Spotted Elk).

There are varied stories about what occurred after the group of Hunkpapa arrived near the area of Bridger, but it is known that in the dead of night on December 23, Spotted Elk led the group south to the Pine Ridge Agency to meet Oglala leader Red Cloud.

During the journey, the elderly Spotted Elk fell ill with pneumonia and his condition slowed the group, and eventually, they were intercepted by the 7th Calvary on December 28 near Wounded Knee Creek. A makeshift camp was set up and there, the people slept with the calvary surrounding them.

The next morning, Spotted Elk and other men met with Colonel James W. Forsyth who demanded the Lakotas to give up their arms, and a shot was fired by an unknown person, which prompted the soldiers to open fire on the unarmed Lakotas.

After a few hours and after the dust settled, over 250 Lakotas lay dead, including Spotted Elk. Lifeless bodies were reportedly found three miles from the creek. The wounded and those who were able to flee, began their journey back to the Cheyenne River Agency, and returned to the areas of Takini, Bridger, and Cherry Creek.

Fearing retaliation, the calvary returned to the Pine Ridge Agency where they entrenched themselves until January 3, when they returned to the massacre site to bury the slain. Photographers accompanied the military unit, and their photos captured the harrowing images the frozen corpses of women, children, men, and Spotted Elk.

And every year, on the date of Sitting Bulls killing, the people remember their respected leader, and those who were killed and those who survived the Wounded Massacre with a memorial ride, a run, and other honoring ceremonies along the way.

Riders on horseback begin their two-week journey south to Cheyenne River, where they stop along the way at residences, including that of Arvol Looking Horse, Keeper of the Pipe.

At each stop, the group of riders and those following in vehicles are given provisions and are fed.

At some stops, honor ceremonies are conducted, such as the one that occurred on December 23 in Bridger. The HAWK 1890 Descendants group provided a meal at the UCC Church and remembered individuals who have journeyed into the spirit world, and had, during their lifetime, contributed greatly to the memorial ride.

Chairs were set up in the church with blankets placed over them. The empty chairs represented the following individuals: Daniel Afraid of Hawk, Chubbs Thunder Hawk, Richard Larrabee, Byron Buffalo, Rocke Afraid of Hawk, Birgil Kills Straight, John Around Him and Guy White Thunder.

The next day, riders got back on their horse and made their way to Big Foot Pass by way of 4 Corners, and continued on their journey.

A severe winter storm hit the state on Saturday, December 28, as temperatures dropped and snow began to fall. The storm and brutal winter conditions did not deter the hundreds of riders as they made their way to burial site in Wounded Knee.

A caravan of vehicles followed the riders and runners carried staffs as the riders began riding in a circle. Women trilled and men whooped and hollered.

Prayers and songs were conducted and a meal was provided.

The next day, the storm worsened as winds were projected to reach over 55 miles per hour. As the survivors and wounded did that horrific day in 1890, a group of runners began making their way back to Cheyenne River, covering 180 miles where the run will end in Takini.

Joseph Brings Plenty Sr. has participated in and is an advocate for the survivor run, posted this message on his Facebook account on Sunday:

“Nearing Potato Creek. There’s a ridge to the south of the community. This is where children with wounds from the massacre gathered, the families in the area here cared for them until they died from their injuries and were buried along that ridge.”

Brings Plenty has been outspoken about remembering those whose journeys did not end at the massacre in Wounded Knee.

In a 2014 interview with lastrealindians.com, Brings Plenty stated:

“Some of the relatives journeyed back to Takini. Through the cold air and during the night, the only light that led their way was the moon. Some of the relatives that started the journey back to Takini, never made it back. Some were subdued by their injuries and they were still hunted, through territories that are now occupied by ranchers, settlers and small towns. They had to travel at night and stay hidden during the day.

An elder in the Bridger area shared a story with me, about two young boys who were wounded at the massacre sight, traveled back to the Bridger area, only to eventually die from their wounds. This run is done in remembrance of our relatives that endured and persevered through times when a world that was known as home to our people was turned upside down on them by political interests measured in resources of minerals, water, land and ownership.”

On Tuesday afternoon, December 31, the group of runners arrived in Takini where they were honored with prayer, ceremony and a meal. 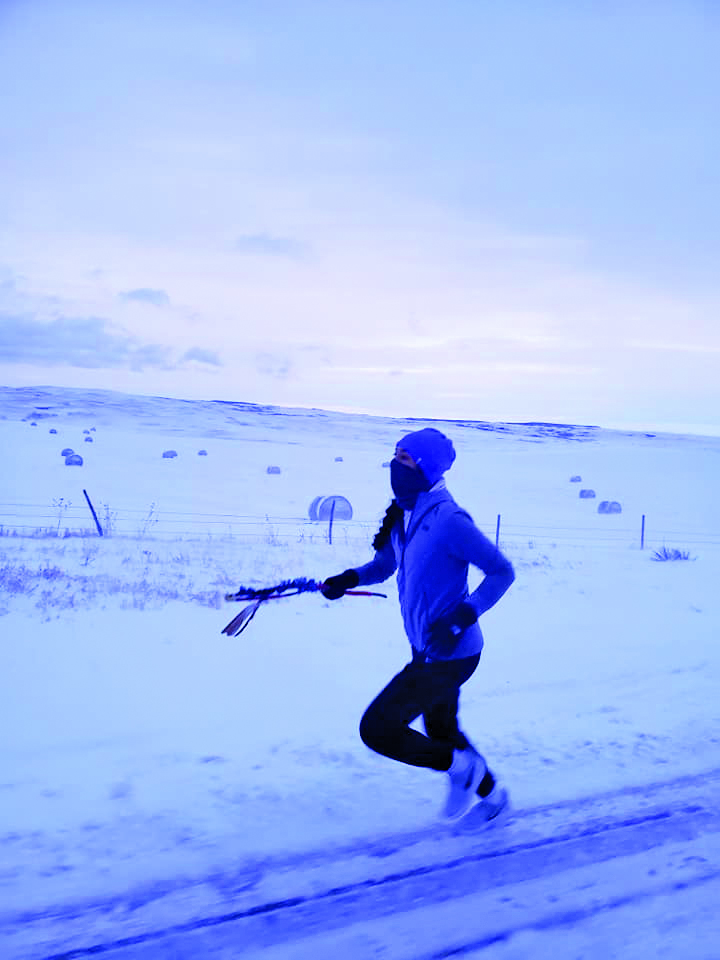 PHOTO SUBMITTED
Jalissa Fillmore carries as staff as she runs from Wounded Knee to Takini. 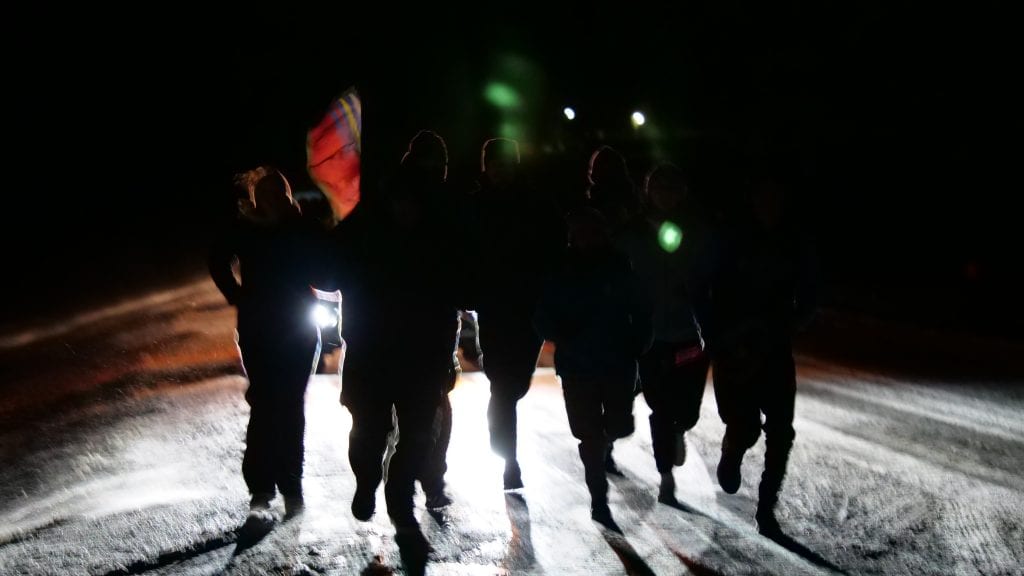 PHOTO BY SETH BRINGS PLENTY
In remembrance of those who survived and those wounded at the massacre in Wounded Knee, a group of runners make their 180-mile journey through brutally cold temperatures and in the night. 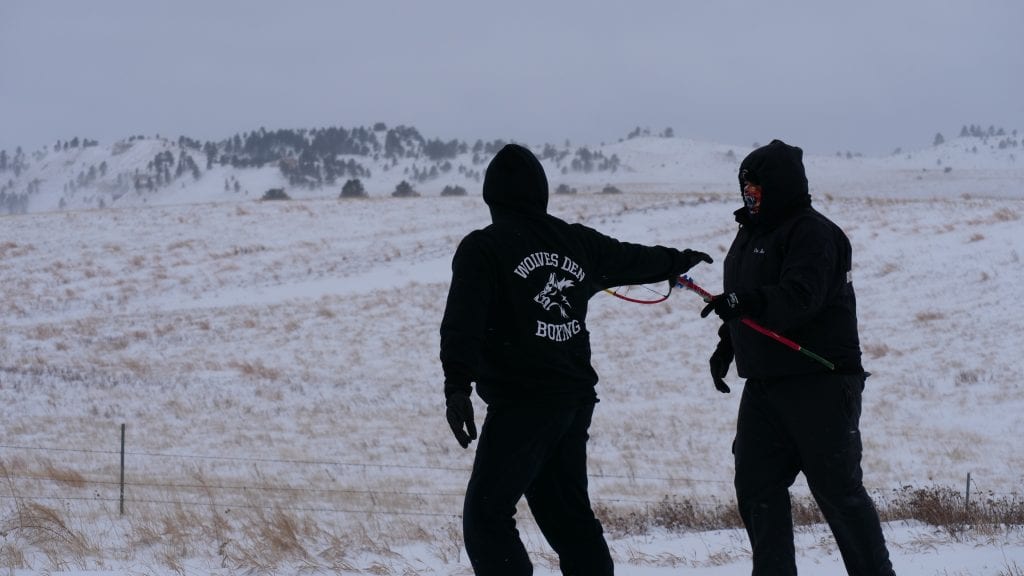 PHOTO BY SETH BRINGS PLENTY
A runner hands off a staff to another during the Cankpe Opi Takini/Wounded Knee Survivor Run. 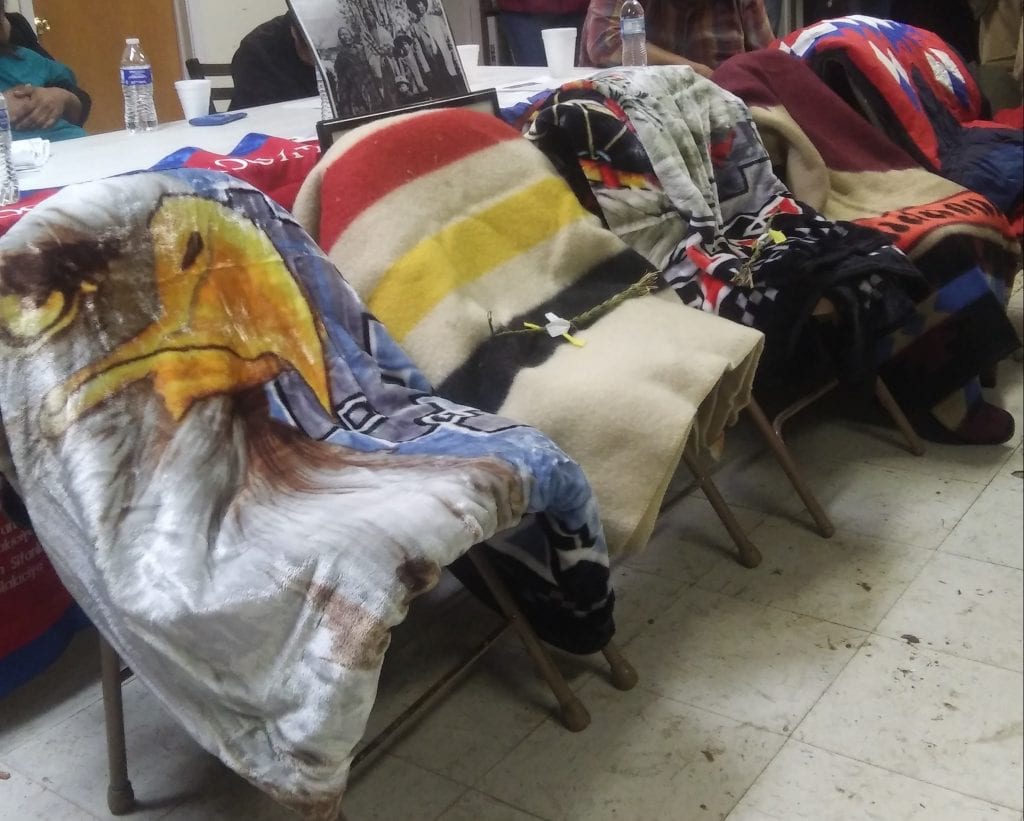 PHOTO SUBMITTED
On December 23 in Bridger, the HAWK 1890 Descendants remembered individuals who have journeyed into the spirit world, and had, during their lifetime, contributed greatly to the memorial ride. Chairs were set up in the church with blankets placed over them. The empty chairs represented the following individuals: Daniel Afraid of Hawk, Chubbs Thunder Hawk, Richard Larrabee, Byron Buffalo, Rocke Afraid of Hawk, Birgil Kills Straight, John Around Him and Guy White Thunder.