For the first time in his life, 70-year-old renowned MC Jerry Dearly announced that grand entry would be led entirely by a group of women veterans carrying the eagle, red-tail hawk and Tokala staffs.

As the women led the way, Dearly proclaimed that in all his years traveling to powwows across Indian Country, what was occurring had never been done before.

As the women entered the dance circle, they were followed in step by the color guard, carrying the flags of the Cheyenne River Sioux Tribe, the U.S, the POW/MIA, and that of the Gold Star Mothers.

“In the past, women veterans were pushed aside and looked at as second-class citizens. As a veteran’s association, we wanted to recognize the women veterans and show that women have the right to be treated as equal to men. Robert Dunsmore and I talked about this for a long time, but we had to wait for the right time to do this. We talked approached Jerry Dearly and he said he had never seen it done either, and he supported it,” said Charging Eagle.

Indeed, during the grand entry, Dearly spoke to the audience about the important roles that women have as warriors, in particular, with the high volume of females deploying to combat zones in recent wars.

“We said, ‘Forget about rank or age,’ because that’s how men work- they tend to look at seniority. Robert and I were looking at all veterans as equals. The women are just as much warriors as we are,” said Charging Eagle.

Not only did the women lead the way, all women veterans were recognized and celebrated. The flag of WWII veteran Hazel Owl King was flown on the center pole of the powwow grounds. Granddaughter, Wilma Waters said she was overcome with emotion when she learned of the honor bestowed upon her late grandmother.

“My grandmother was such a respected, reserved, humble, conservative Lakota woman. She carried herself so beautifully and never really talked about her service until her later years. To have her flag flown on the center pole was such a great honor to see it. She deserves her recognition for her service, just as other women veterans do,” said Waters.

Waters was so emotionally moved that she pledged an all-category women veterans’ special for next year’s CRST powwow.

Before the grand entry, female veterans from the audience were invited to take part in the grand entry, and they came in mass behind the color guard. WWII veteran Marcella LeBeau was given a seat of honor in the center of the powwow grounds.

After the flag and victory songs were completed, a waktegli song was performed. Immediately, the women veterans led the dance around the dance circle, with the rest of the color guard and dancers following.

“Waktegli was done in the old days when the warriors were victorious and is only done when tokalas and akicitas request it. That’s what we did for the women veterans, we requested a waktegli for them,” said Charging Eagle. 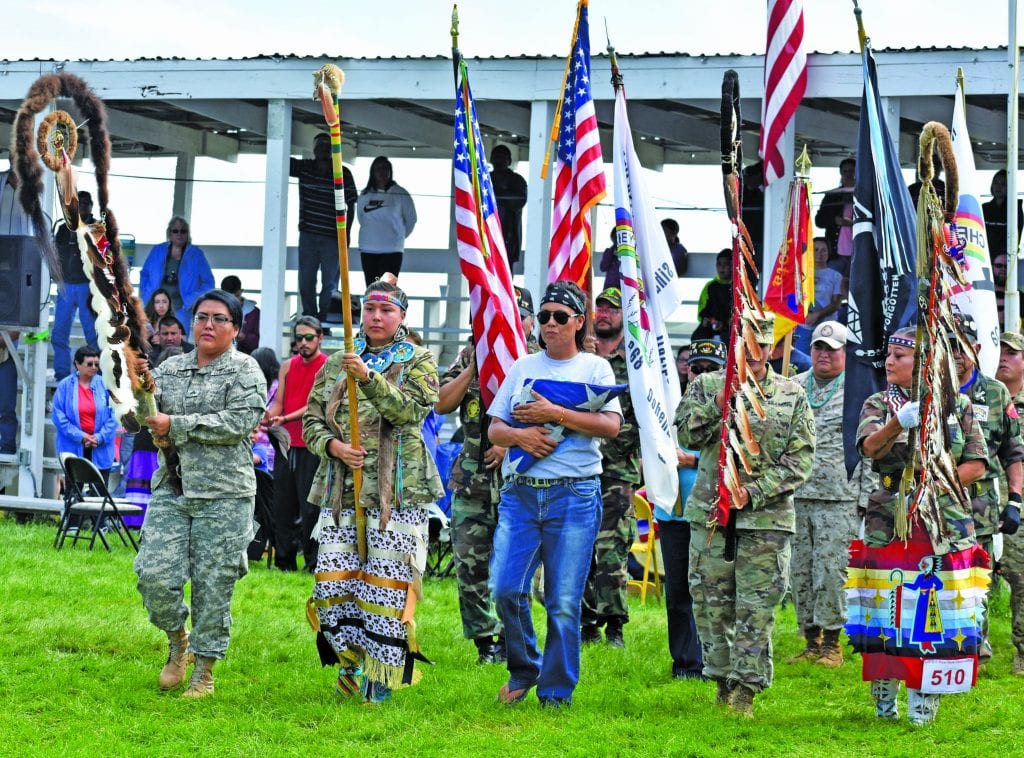 There was an immense response to what happened at the powwow, with public comments applauding the recognition of the women veterans. In a phone interview, Charging Eagle summed up the historic event and the importance of women warriors, “We call on female veterans when we need them, and the women answer the call.”