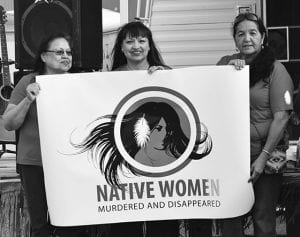 Wind River is a timely film for people living in North and South Dakota, with the reent disappearance and murder of pregnant, 22 year-old Savanna Greywind, who was the apparent victim of what some media outlets are calling “womb raiders.”

At the Eagle Butte Labor Day Fair, a group of women and men gathered to hold a candlelight vigil and prayer for Greywind and her daughter, who was found with two individuals who are being held as suspects in the case.

Wind River is a film about the kind of violence Greywind was subjected to — a violence against young Native women who go missing and who are subject to abuse, but whose stories often go unnoticed in mainstream media and whose abusers and murderers go unprosecuted.

The film revolves around the death of an 18-year-old girl on the Wind River reservation in Wyoming.

Renner plays Cory Lambert, an employee of Game, Fish and Parks, and  an avid hunter who lost his own daughter to a violent death.

Olsen playes rookie FBI agent Jane Banner who is sent from Las Vegas to determine if the case is a murder or not.

When it is not classified by the coronor as a murder, Banner teams up with Lambert to solve the case before she is called back to base.

While not all of the Native American characters in the film are played by Native American actors, Director and Writer Taylor Sheridan makes a clear effort to accuratly represent Native American people and ideas, and to portray the variety of people who would intersect on a Reservation.

The film also raises some of the dynamics that play out in coordinating efforts to solve crimes and the cultures that clash in the process.

The film is quiet and loud in that it contains moments of truth that will resonnate with anyone who has suffered loss.

It also raises awareness of the issues faced by Native American women on the big screen for a broader audience in a clear effort to raise awareness about one issue facing Indian Country.

Sheridan said, “It is the great shame of my nation the manner in which it has treated the native inhabitants of North America.

“Sadly, my government continues that shame with an insidious mixture of apathy and exploitation. (…) There is nothing I can do to change the issues afflicting Indian country, but what we can do as artists – and must do – is scream about them with fists clenched. What we can do – is make sure these issues aren’t ignored. Then the people who can effect change will be forced to. [Cannes 2017],”  IMBD.com.

This film is worth watching. It is engaging, the characters believable, the issues real.

From the Editorial BoardFrom the Interim EditorPolitical Voices: Not perfect, but progress