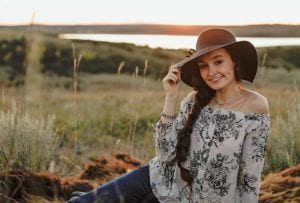 Life for Timber Lake alumni Elsie DuBray has been full of adventures, education and educating others. This should come as no surprise to anyone who knows the Stanford University sophomore, who was a standout during her high school career.

Recently, DuBray was a panelist at the 4th Annual Conference on Native American Nutrition, which took place September 15-18 in Prior Lake, MN. The conference is devoted to the food and nutritional well-being of indigenous peoples, and brings together tribal officials, researchers, practitioners, funders and others to discuss the current state of indigenous and academic scientific knowledge.

At the conference, DuBray also gave a presentation titled, “Research at the Intersection of Science and Culture: A Life-Long Study of Buffalo”.

During her presentation, DuBray stated, “Buffalo aren’t gone. They can’t be replaced, and they certainly aren’t a lost cause. Believing such things is a mistake that jeopardizes the future of our people and our culture.”

On September 17, DuBray returned to her family’s ranch in Blackfoot, and the very next day, she and her parents, Fred and Michelle, drove across the country in DuBray’s car to Stanford University in California to help her move into her dorm for her sophomore year. After helping their daughter settle in, Fred and Michelle flew home to South Dakota.

On Monday, September 21, DuBray flew to Green Bay, Wisconsin to attend the First Nations Development Institute’s Food Sovereignty Summit. There she spoke on a film panel about the movie, “Gather”, a new, feature-length documentary that focused on the growing Native American food sovereignty movement.

The film featured DuBray and her research on bison, and her High Plains Regional Science and Engineering Fair win in 2018.

By 11 PM Pacific Time on September 24, DuBray was back in California, ready to start classes the next day. According her mother, this year she has a friend from South Dakota at school — Calico Ducheneaux of Mobridge.