When the dream becomes real, you wake and sleep with a smile

We often glorify another way of living — a way that we think would be better than how and where we live now — and that most people do not get to experience on a real level.

My father, Thomas William Rust II, whose friends call him Tom, or Bad Tom, owns a sailboat called Another Way, the name of which holds a serendipitous truth: that living on it is certainly living in another way.

For people used to the limitations of antiquated ways and means, living on a sailboat may not be too far a leap from what they consider normal.

RV and tent campers could easily adjust to boat living, if they understood or were willing to learn all the ins and outs of living on a sailboat.

My father is the proud owner of a 1980, 37.3 foot, B Model, Caribbean Sailing Yacht, with cabin space of about 400 feet, which includes the “head” or toilet, a shower, captain’s salon or bedroom, and the main salon which includes the living/dining room, galley and navigation station.

“CSY was one of the first companies to recognize the impending growth of the Caribbean charter industry and although the company went out of business in the early 1980s, the well-founded boats have continued to sail the world’s oceans for the past four decades,” according to Wikipedia and confirmed by my father.

These boats were built and sold with an agreement of the buyer to use it as a charter boat until it was paid off to a certain amount.

My father was able to buy this boat used, built with fiberglass and a walkthrough cabin (meaning it has steps going into a lower level in which someone can live or entertain), two years ago.

Weathered, worn and a little neglected, my Dad has spent the last few years off the coast of the Domincan Republic, harboring during hurricane season in Luperon, living on this sea-worthy vessel.

Before I arrived, he had the boat pulled onto land where he cleaned it and painted it, repaired the galley and the head, stained the wood throughout the cabin, worked on the engine and the anchor and more that I cannot mention or even understand without looking it up or asking my Dad to explain it to me.

We took it on a day sail the first day I arrived, and the motor started knocking. We sailed down the coast a few miles to a beach and dropped anchor with several other boats, swam, ate, the sailors drank, and then we all sailed back to the harbor.

Now Dad has to have the motor pulled and repaired, and to maintain the integrity of the boat, he really wants to keep the original engine. So, he has been calling around looking for someone he can trust to do the job right for an affordable price.

On the second sail we took to the cove this past Saturday, we traveled on my Dad’s neighbor’s boat, and we had the chance to snorkel, witnessing the beginnings of a recovering reef.

Early Monday, Dad took his dingy to the dock, rode his motorcycle to Puerto Plata to see the shop of a potential mechanic for his motor, and then to the local supermarket where he bought the meat and veggies we would use for dinner. Monday evening, we tested out Dad’s oven by baking pork chops and then brownies (which we nearly downed by midday Tuesday).

While Dad went to Luperon, I worked in the marina until I took a motor concho (50 pesos or $1.00) into the small town of Luperon. I met Dad there and after spending a bit of time in town, we headed back to the dingy (a small boat to taxi from the boat to the shore), and motored over to the boat.

On Tuesday, while I worked from my computer, the boat’s generator rumbling in the background and the heat sitting heavy on my every pore despite the little fan working furiously to cool me down, my Dad took his dingy around the front of the boat, which sits in the harbor, and replaced the mooring shackle with one that swivels.

One of his neighbors saw him working and made his way over to help my Dad out. They sat in their respective dingy’s working in the hot sun, and finished their work before I finished mine.

When the generator is not running, some of the smaller voltage electrical equipment runs off the power from the solar panels or the small wind turbine.

As soon as Dad’s converter comes in, we will be able to run my computer from the renewable power sources.

For drinking water, showers and whatnot, we use fresh water that Dad buys from town. He has a 150 gallon tank. The water is delivered in gallon jugs and when ordered, someone delivers the jugs and pours them into the tank. He usually orders 100 gallons at a time.

We wash our dishes right away to avoid attracting bugs and showers on the boat are more like spray and washes than the showers I take at home. Dad sends his laundry out to a local woman to wash each week since he does not have laundry facilities, and it is cheaper to have this woman wash his clothes than it is to use the washer  in the Marina. Most people hang their clothes to dry rather than use a dryer.

At night, we open the hatches and hope for the wind offers a respite from the humidity (or at least I hope for the respite, my dad loves the heat).

One night, the humidity pushed me out of bed, and I went up top to try to cool down. On the way back down, in my sleepy daze, I stubbed my pinky toe, and it throbs a fading black and blue when I bump it.

Internet keeps us connected as do the people and activities in this small community, so we have been invited to a smoked pig barbecue, movie knight and karaoke night at a place popular with the gringos called Wendy’s, and stopped in for pool at Astrid’s, another place my Dad likes to hang out.

On my Dad’s boat, I forget to turn certain switches on or off, have to dig into the deep refrigerator to access the milk or butter, cannot forget to replace the lid quickly so that the ice in it does not melt, and have to sometimes ask Dad from the head to wiggle the wires for the pump so that the shower head works.

These are just a few of the ways my Dad lives on his boat, and it is certainly another way of life — a way of life familiar and foriegn to my comparatively spacious and luxurious apartment in Eagle Butte.

In only my second week of staying on the boat with my father, I understand that my father has made his dream of living the life of a sailor, which he envisioned in his forties, come true, and he would not give up any of the benefits to escape the sacrifices he makes or the work he must do to live as he does.

At 72, he wakes with a smile, curses his misfortunes, celebrates his victories, and goes to sleep with a smile. As I move into the latter half of my life, I intend to make my own dreams a reality without any false pretense about the sacrifices I may have to make to wake and fall to my pillow each day — good or bad — with a smile on my face.

Strega races past us on the way to the cove. The vessel is a racing boat and once she got going, we did not have a chance. When we arrived at the cove, the winners were congratulated. One of the sailors asked what I thought of the race, and I said it was great, I was able to read a few chapters. Everyone laughed. Our fast 5 to 6 knots is like going 6 or 8 miles an hour on land. Photos by Jody Rust 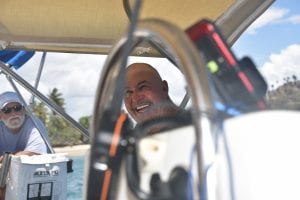 Tom Rust, my father, laughs at a joke he made on his friend’s boat. We took a day sail to a nearby cove where we dropped anchor with three other boats, swam, ate and then came back to the harbor.

Second week of the South Dakota Legislature: A report from Representative Oren LesmeisterLet us shine light on MMIW epidemicFirst week of Legislature report