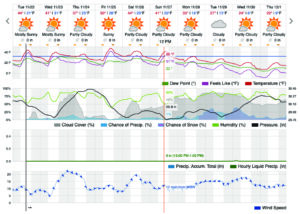 The system that is developing now is strikingly similar to the one that developed into a blizzard in early December 2016. Systems like this can “throw out” massive thunderstorm-like snow events that are very difficult to predict we will have atmospheric conditions next week that significantly increase the chance that this system will spin-off a significant winter-storm or two.

Which side of the turkey has the most feathers? The outside. What do you call a turkey in a blizzard? Fowl-weather. A special thank you to Cam for this week’s jokes.  Be safe, stay warm, and enjoy one another as we enter into this long cold winter. Until next week.