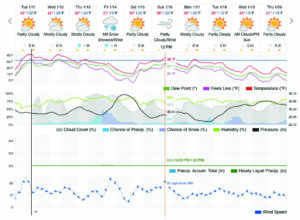 This week is going to be a heck of a lot warmer than last week; and with winds speeds that won’t peel your skin off your body!

Thursday is going to be partly cloudy with a high of 29°F and a late-night low of 26°F. Winds will be gusting with an afternoon NW-SW-NW 10 mph to 16 mph wind shift. There is a 6% chance of rain in the afternoon and a 9% chance of wintery mix after sunset.

Friday will be cloudy, windy, and chilly. The high temperature for the day, 29°F, will happen just after midnight. Temperatures will fall as the day progresses and will dip to 13°F by midnight. NNW winds in excess of 30 mph will make it feel like 3°F. There is at least a 10% chance of snow in the latter part of the day.

Saturday will feel like a common winter day with a high of 35°F and a late-night low of 19°F. Wind chill will make it feel like 12°F to 17°F. Winds will be lighter than Friday with SSW-W 13 mph to 18 mph gusting bringing in plenty of clouds. There is a 12% chance of snow.

Sunday will look much the same, but winds will be much more active than Saturday’s winds. Expect a high of 35°F with a late-night low of 19°F. Winds will be gusting NW 20 mph to 30+ mph. There is a 5% chance of late-night snow.

Monday should be partly cloudy with a high of 32°F and a late-night low of 23°F. Winds are expected to be gusting NW-NNW-N 12 mph to 15 mph. There is a 10% chance of early morning snow.

Tuesday is expected to be mostly cloudy with a high of 33°F and a late-night low of 13°F. It will feel about 12°F colder than ambient temperatures.

Wednesday will be cloudy with an almost zero chance of meatballs, though there is a 26% chance of snow. It will also be the coldest day of the week.

Here’s a winter joke with a wink to those who’ve temporarily lost their sense of smell due to COVID. Q: What did one snowman say to the other? A: Can you smell carrot? Here’s another one. Q: What do you get when you cross a vampire with a snowman? A: Frost bite.

Those are the weather jokes for this week. I asked my wife for help and she is well-known for being humor-impaired. So don’t blame me if the jokes aren’t funny this week! Help me out and send something funnier to weather@westrivereagle.com. Be safe, mask-up, and stay warm.