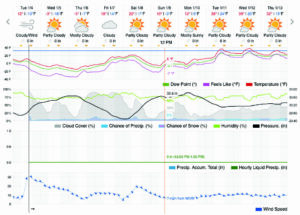 This week’s outlook starts with a warning, PLAN FOR EXTREME COLD THROUGH THE WEEKEND.  Wind chill will be as low -35°F on Wednesday and Thursday. Ambient temperatures will top out at -4°F. Obviously, this weather is extremely dangerous.

A high wind advisory was issued by the National Weather Service earlier this week. On Tuesday, January 4, wind speeds reached 45+ mph and brought a sub-Arctic freeze upon us. Wednesday, January 5, will be dangerously cold with a high of just -4°F and a late-night low of -17°F. Wind speeds are expected to exceed 35 mph in early morning hours and decrease to 15 mph by midnight.

Thursday will be partly cloudy and VERY cold with an early morning low of -16°F at sunrise that will feel like -35°F and a late afternoon high of -5°F. It will feel like -22°F. Winds will be gusting NW 13 mph in the morning to ESE 5 mph in the evening. The ESE sunset wind shift will warm things up a little bit. There is a 10% chance of snow throughout the day.

Tuesday will feel like a heat wave with mostly sunny skies and a high expected to reach at least 38°F. That will be a 40°F temperature swing in less than 24 hours. Winds are expected to be gusting W-WNW 9 mph to 14 mph. There is a 6% chance of snow.

Next Wednesday and Thursday should be mostly sunny with highs in the upper 30s that may reach into the lower 40s. Expect lows in the low 20s. Wind chill will make it feel about 15°F colder than ambient temperatures. Winds will hold steady WNW-W 9 mph to 12 mph. There is a 5% chance of snow.

How cold is it? It’s colder than a brass toilet seat on the shady side of an iceberg. It’s so cold that I saw a politician with her hands in her own pockets. It is so cold that snowmen are migrating south.  Those are the weather jokes for this week, please send something funnier to weather@westrivereagle.com. Be safe, mask-up, and stay warm.