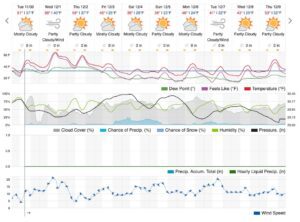 Another week of Not-So-Bad weather

Welcome to the autumn weather roller coaster! Last week we experienced a mini heatwave that brought temperatures in excess of 60°F.  It also brought plenty of winds and morning frosts to remind us that winter is on the way.

Friday will be about twenty degrees cooler than Thursday’s heat wave. Expect partly cloudy skies with a high of 44°F and a late night low of 29°F. Winds will be steady NNW 10 to 15 mph throughout the day; expect an evening shift NNW-N-E 8 mph to 10 mph. There is a less than 2% chance of precipitation. Morning frost and spotty fog are likely.

Saturday will cool off a bit more with an early morning low of 29°F and an afternoon high of just 38°F. It will be the coolest day next week. By afternoon the mostly cloudy sky will be dancing as winds gain speed from 5 mph in the morning to 17 mph in the late afternoon and into the night. There is a 25% chance of precipitation.

Monday will be mostly cloudy without a chance of meatballs; however there is a 4% chance of rain. Winds will be fairly calm with W-WWS gusts between 8 mph and 13 mph.

Tuesday will be much windier than Monday with a few more clouds in the sky. Expect an early morning low of 22°F with a late afternoon high of 41°F. Windchill will make it feel like temperatures are in the low 20s. Wind will be gusting NW 15 mph to 22 mph throughout the day.

Wednesday will clear up a little bit with a few hours of partly cloudy skies, but it will still be moderately windy. Winds will be fairly steady W 12 mph to 16 mph; late afternoon gusting in excess of 16 mph is likely. Expect an early morning low of 29°F with a late afternoon high of 43°F. There is a miniscule 3% chance of rain.

Thursday will be partly cloudy with an early morning low of 32°F followed by an afternoon high of 53°F. Winds should be WSW between 10 mph and 15 mph. There is a 4% chance of precipitation.

“What is the best kind of breakfast cereal to eat in the winter?” asked the snowman. “Frosted Flakes,” replied the tiger. That’s the weather joke for this week.

Another special shout out to Commander Brett Curry of Eagle Butte Legion Post 308 for an almost-hilarious attempt at humor! Please send a joke that is actually funny to weather@westrivereagle.com. Stay warm, share a laugh with a neighbor, and please be safe.