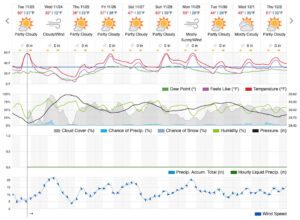 Almost “Normal” for a Week

There is a massive cold low-pressure system that is slowly moving inland and causing significant flooding and snowfall in British Columbia and across the northern plains. We are on the northern edge of a southwest heat ridge that is pushing the northern jet stream further north. Modeling suggests that the heat ridge will be over us for at least the next seven to ten days and possibly through the middle of December. That will mean slightly warmer and drier than “normal” weather this week.

Friday will feature partly cloudy skies with an early morning low of 36°F and a late afternoon high of 56°F. Winds will be gusting between W-WNW 10 mph to 15 mph. There is a 12% chance of evening precipitation as a clipper system is likely to move through in overnight hours.

Sunday will be partly cloudy with an early morning low of 38°F and an afternoon high of 57°F. Winds will be shifting S-SW-W 5 mph to 12 mph. There is a 4% chance of rain.

Monday will be sunny and windy with a high of 57°F and a late-night low of 27°F. Expect strong winds gusting between W-NW 14 mph to 24 mph. Stronger gusting is possible. There is a 2% chance of precipitation.

Tuesday will be partly cloudy with an early morning low of 27°F and an afternoon high of 40°F. Winds will be a bit calmer than on Monday but still active NW-NNW 10 mph – 12 mph before rapid shift NNW-ESE at sunset. This is the type of rapid wind shift that can create microclimate weather extremes and sudden temperature inversions; Tuesday’s sunset should be spectacular.

Thursday will start out with a low of 32°F and an afternoon high of 51°F. Skies will be full of fast-moving clouds with winds moving W-WNW 8 mph to 14 mph. There is a 7% chance of predawn precipitation and an almost zero chance during the day.

When the atmospheric heat ridge that is over us starts to dissipate, the cold air that is sweeping across the northern plains will be headed our way.  It would be wise to prepare for a prolonged and intense cold spell.

Can a turkey jump higher than one of the Six Mystical Water-Towers of Eagle Butte? Yes, a water-tower can’t jump at all! And, in honor of Thanksgiving: Which side of the turkey has the most feathers? The outside. Those are the (kind of) weather jokes for this week.  A special “Thank You” to Commander Brett Curry for his contribution to this week’s attempt at weather-humor. Be safe, mask up, and take care.