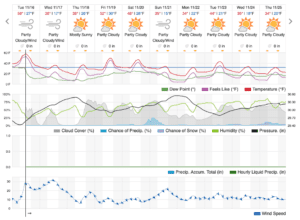 The major weather feature over this last week has been the high winds. Winds speeds as high as 70 mph were recorded near Bridger, Dupree, Eagle Butte, and Whitehorse. High wind blew over a chicken feed shed in Promise, much to the delight of the resident chickens. We also received 0.5 inches of much needed rain last week but things dried out almost as fast as it came down.

High winds and dry conditions necessitated a Red-Flag fire warning issued by the National Weather Service in Aberdeen.  “The combination of gusty winds and low relative humidity will support rapid fire growth. If a fire develops, it would be difficult to control and suppress.” High winds may cause loose debris, damage property and cause power outages. Travel will be difficult especially for high-profile vehicles…People are urged to secure loose objects that could be blown around or damaged by the wind.” Next week will be somewhat calmer than the last few days.

Friday will be calmer with more reasonable NW wind speeds that will top out around 15 mph in the late afternoon. Expect an early morning low of 30ºF and a high of 51ºF that will feel like 45ºF. Skies will be partly-cloudy, morning fog is likely. There is a 1% chance of precipitation.

Saturday is going to be a classic partly-cloudy fall day with an afternoon high of 48ºF and a late night low of 28ºF. Wind chill will not be too bad, it will only feel 8ºF cooler than the actual temperature. Winds will shift WE-W 8 mph to 12 mph just after sunset; gusting up to 20 mph is possible. Morning fog is likely and there is a 20% chance of snow and/or wintery mix around midnight and into the early hours of Sunday morning.

Sunday will be another classic partly-cloudy fall day, but it will be a bit cooler than Saturday. Expect an afternoon high of just 35ºF. An early morning W-NW wind shift will bring in some of the cold Canadian air coming off a major low-pressure cold trough that basically encompasses the entire Gulf of Alaska. The temperature will fall to 17ºF by midnight with a strong windchill that will make it feel like 4ºF. NW winds will start at 10 mph at sunrise and continue to increase to more than 22 mph by sunset. Modeling suggests a 20% chance of early morning precipitation and a 2% chance of evening precipitation.

Monday will start out with a chill. Expect a sunrise temperature of 16ºF that will feel like 8ºF. Things will warm up to a high of 34ºF that will feel more like 21ºF with the windchill. Winds will be shifting NW-SSW-S-SE 9 mph to 15 mph. There is a 2% chance of precipitation.

Tuesday may feel like a scorcher to some with an expected high of 44ºF and a low of 21ºF.  Wind chill will make it feel about 10 degrees cooler than the actual temperature. Winds will be actively shifting SSW-S-SSW-NNW 10 mph to 20 mph; intermittent strong gusting is likely; beware of heavy straight-line winds. There is a 4% chance of late night snowfall.

We might get some snow on Wednesday, there is a 4% chance that the skies will drop some water in the early morning or after sunset. The high temperature should be near 34ºF with a late night low of 18ºF; windchill will make it feel about 15ºF cooler than the thermometer reads. Winds will be steady NW with a N-NE shift shortly after sunset that will bring in more northern cool air and eastern moisture; there is an 11% chance that this shift will produce some snowfall in the latest hours of the day.

Thursday, Thanksgiving Day, could be the day that we wake up to morning snow. It will be partly cloudy with an early morning low of 20ºF and an expected high of 34ºF. The chance of daytime snow is around 7% with the chance of a wintery mix at about 6%. Winds will be shifting SSE-WNW-W in pre-dawn hours and settle to W 10 mph to 14 mph. Beware of early morning straight-line gusting.

We are in the home stretch of autumn with just over a month until the Winter Solstice. The next few weeks and months are going to be cool…literally. This is a great time to make sure that you and yours are ready for winter. A special shout out to Rev. Kurt Huber who supplied the local precipitation data this week. Take care, mask-up, bundle up, and stay safe.