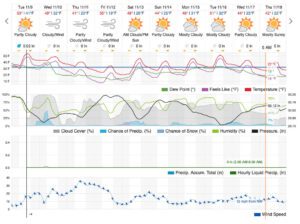 On the edge of Winter

We have a fair chance of getting a few inches of snow this weekend. Dupree and Eagle Butte are on the southwestern edge of an arctic cold low-pressure trough that stretches from Pierre all the way to the Arctic Circle.  That trough will be a major factor for the next week as it makes its way towards the Ohio River Valley and across the Great Lakes.

Veterans Day, Thursday, November 11, will be partly cloudy and very windy. Temperatures will register a high of 40ºF, but the cold wind will make it feel more like 28ºF. Midnight will feature a low of 21ºF that will feel more like 11ºF. Winds will be extremely heavy, gusting NW between 30 mph and 40 mph throughout the day and late into the night. Expect fog to be an issue in low areas. There is 3% chance of precipitation.

Friday will be a bit calmer with partly cloudy skies and another drop in temperatures. Expect an afternoon high of 35ºF with a late night low of 19ºF; wind chill will make the high feel like only 22ºF and the low feel like 8ºF. We have about an 8% shot at receiving some snow on Friday night, especially east of Eagle Butte near the river. Winds will be steady and strong, NW 30 mph to 20 mph throughout the day, with a N 8 mph shift just after sunset and NE 6 mph around midnight.

Saturday will seem downright calm compared to the previous two days, and it is our best chance of accumulating some snow. Expect a sunrise low of 26ºF that will feel like 40ºF, and sunset high of 46ºF that will feel like 40ºF. Winds will be shifting NE-SE-SW-WSW-NW from 8 mph in the early hours to 21 mph around midnight. There is a 13% chance of early morning snowfall of at least 2 inches as of press time on Tuesday, November 9.

Monday will be mostly cloudy with a high of 45ºF and a low of 31ºF. Wind chill will make it feel about 10ºF lower than the thermometer reads. Winds will be steady SSE 7 mph to 13 mph throughout the day and night. There is a 4% chance of some precipitation.

Tuesday will be even warmer with a high of 52ºF and a low of 33ºF on what should be a partly cloudy day. Winds will shift SE-SW during daylight hours then a quick SE-NW shift is expected shortly after sunset. There is a 3% chance of precipitation. Plan for patchy morning fog.

Wednesday will be another partly cloudy, typical fall day with a high of 45ºF and a late night low of 25ºF. Winds will be steady NW 9 mph to 16 mph throughout the day and night. There is a 7% chance of precipitation.

Thursday should shape up to be mostly sunny with a high of 43ºF and a low of 22ºF. Plan for wind chill to be a factor as it will bring temps feel about 10ºF colder. Winds will not be too bad, NW 10 mph to 17 mph. There is a 7% chance of precipitation. Morning fog is again likely.

What did the icy road say to the car? “Want to go for a spin?” That’s the weather joke for this week. Send one that is actually funny to weather@westrivereagle.com. Be safe, stay warm, and mask-up.