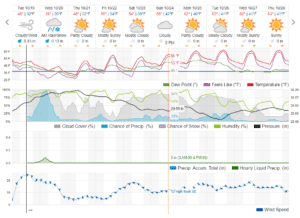 Time to break out the wool hat. The chance of an autumn snow hitting Eagle Butte Wednesday morning was 74% at press time on Tuesday afternoon; less than ½ inch of snow accumulation was forecast in the model but actual accumulation is likely to melt into freezing rain fairly fast.  There is a declining chance of precipitation as the day turns to night with a 6% chance of overnight precipitation that continues into Thursday.

Thursday will be cool in the morning with an expected low of 31°F and a partly-cloudy afternoon high of 51°F.  Winds will be gusting E-SE-S 6 mph to 9 mph. There is a small chance of rain that will increase to 13% overnight. Fog and ice are likely.

Friday will start out with a sunrise low of 33°F and a late afternoon high of 58°F. Winds will pick up from SE 6 mph in the morning hours to E 12 mph by sunset. There is a 24% chance of pre-dawn precipitation that will lower to an 8% chance after sunrise.  Expect morning fog and frost.

Saturday will be mostly cloudy with an early morning low of 38°F and an afternoon high of 53°F. There will be gusting EES-E 16 mph to 20 mph winds that should calm to 10 mph by sunset. There is a 9% likelihood of scattered thunderstorms and/or showers during the day and a 20% chance of nighttime precipitation; it will be bone-chilling if it does rain.

Monday may feel to some like a heat wave as the high is expected to reach 62°F by early afternoon after a pre-dawn low of 46°F. Winds will be gusting SE 12 mph to 19 mph. The chance of daytime precipitation is 7%, the chance of evening precipitation increases to 13% by midnight.  Fog is likely, ice is not.

Tuesday will be a bit warmer, expect an afternoon high of 63°F with a late night low of 41°F. Winds will be dancing SE-S-W 13 mph to 17 mph with plenty of clouds in the sky. There is at least a 25% chance of precipitation; likely in the form of scattered showers and/or pop-up thunderstorms. Fog is likely.

Wednesday should be nicer with a projected high of 62°F after a sunrise low of 42°F. Winds will be gusting W 16 mph to 21 mph. There is less than a 4% of precipitation. Morning and evening fog are likely.

What do you call dangerous precipitation? “A rain of terror.” That’s the weather pre-Halloween joke for this week. Please send one that might actually cause laughter to weather@westrivereagle.com. Until next week, be safe, mask-up, and look out for one another.