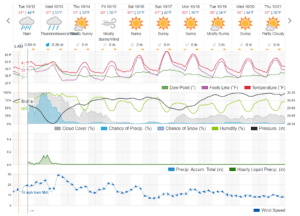 Autumn arrived in full force this week as thunderstorms and rain showers ushered in our coolest weather since last spring. The forecast for the next seven days is considerably drier than the last seven days.

Friday will provide a windy start to the weekend.  Partly sunny skies will clear up around noon as a sunrise low of 43°F heats up to a brisk 52°F by midday. Winds will gust W between 15 mph to 24 mph during daylight hours and settle to 12 mph around midnight. There is a 10% chance of rain in the early hours with almost zero chance in the afternoon.

Saturday is going to be a bright sunny 67°F in the late afternoon with a late-night low of 36°F. There is a chance of overnight frost in low-lying areas in elevations exceeding 2,000 ft. above sea level. Winds will gust W between 12 to 18 mph. There is a tiny chance of precipitation, plan for morning fog.

Sunday morning will be a clear and cool 43°F at sunrise and it will not reach the high of 67°F until mid-afternoon. Winds will shift W-SW-S 8 mph to 12 mph as the day progresses. There is a 4% chance of pre-dawn precipitation; expect morning fog.

Monday will be partly cloudy with a chance of meatballs; there is also a 2% chance of rain. Expect an afternoon high of 62°F with a late night low of 36°F. Frost is possible at elevations exceeding 2000 ft. Winds will hold steady W-WWN between 12 mph to 17 mph. Again, rain is possible but unlikely; conditions suggest patchy morning fog.

Tuesday will top out at 57°F with partly cloudy skies and a pre-dawn low of just 34°F. Frost is possi-ble and morning fog is likely. Winds will be relatively steady at WWS 12 mph throughout the day. There is a 2% chance of daytime precipitation, most likely in the form of early morning patchy fog though short, scattered showers are possible.

Wednesday will have fewer clouds than Tuesday, with a high of 56°F and a late night low of 35°F. Again, there is a chance of morning frost in elevations above 2,000 ft. Winds will shift NNW-N-NE 10 mph to 12 mph throughout the day. There is a 7% chance of pre-dawn rain. Morning fog is likely.

Thursday will have a few more clouds in the sky with an early morning low of 38°F followed by an afternoon high of 57°F; nearly perfect sweatshirt weather. Winds will likely be steadier than the previous seven days at 9 mph to 11 mph but there will be an early morning E-S shift with a slight possibility of pre-dawn showers. Again, fog is likely but rain is not.

How does a buffalo get out of a tree? It sits on a leaf and waits till fall.  That’s the weather joke for this week. Please send a better one to weather@westrivereagle.com.  Be safe, mask up and care for one another; winter is coming…again.