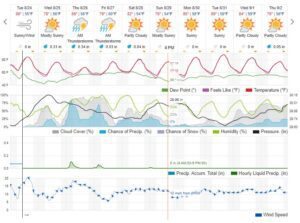 YES…Rain! And maybe even more rain!

Rain! We got rain! Admittedly, 0.65 inches is not very much but at this point in the drought, the small amount that we did get was more than welcome. This coming week will feature pop-up thunderstorms, scattered showers, muggy afternoons, and buggy evenings. The dominant weather system in the West River area will be coming up the Missouri river valley off of the lower Plains and the Gulf of Mexico. There will be quite a bit of moisture in the air from the tropical storms that hammered the East Coast last week.

Friday is very likely to be wet with an afternoon high temperature of 79°F and sunrise low of 60°F. Winds will gust E-ESE 6 mph to 12 mph. Heavier winds are likely in the event of a thunderstorm. There is a 73% chance of a morning thunderstorm and/or showers, a 5% chance of afternoon showers, and a 25% chance of midnight showers. Conditions indicate high probabilities of high-intensity pop-up thunderstorms.

Saturday will likely be dry but there is still a good chance of scattered showers and pop-up thunderstorms throughout the day. An early morning low of 54°F will give way to a high of 82°F by early afternoon. Winds will be shifting E-N-NNW and gusting between 10 and 15 mph.

Sunday will clear up a bit and give us mostly sunny skies. Expect an early morning low of 54°F and an afternoon high of 78°F. Steady NW winds 12 mph to 14 mph will likely carry some smoke from western wildfires. There is a 25% chance of morning rain and a 8% chance of an evening rain event.

Monday will probably be the clearest day of the week. Sunny skies will give us a toasty high of 85°F preceded by a sunrise low of 58°F.  There is a 7% chance of morning showers. S-SSE winds will be gusting between 5 mph and 15 mph.

Tuesday will not be raining tacos. It will be sunny, muggy, and hot. Expect a morning low of 59 °F with a high of at least 89°F in Eagle Butte; it is likely to be hotter in the valleys. Winds will be gusting 10 mph to 15 mph, shifting SSE-E just before sunset. There is a slight possibility of pop-up thunderstorms that is unlikely but worth a mention because long range moisture modeling (+5 days) is difficult this time of year.

Wednesday will still be warm but there will be enough cloud cover to make working outside somewhat bearable. A dawn temperature of 59°F will give way to an afternoon high of 84°F. Winds will be steady E 11mph to 14 mph all day and into evening hours. There is a 12% chance of scattered showers and/or scattered thunderstorms.

It might rain on what is sure to be a cloudy Thursday. Might is a mighty big word for a 24% chance of scattered showers and/or pop-up thunderstorms. Expect an early morning low of 56°F and an afternoon high of at least 79°F. Winds will be E-ENE 11 mph to 14 mph with gusting likely in the late afternoon. Again, there is a 25% chance of precipitation at some point during the day; modeling suggests that we will receive at least 0.05 inches if it does rain.

The September agricultural forecast suggests a high likelihood of some wet weather that will provide some drought relief. The high-pressure ridge that has been sitting over western Washington state since June has finally moved offshore. This “pulled” the jet stream west which allowed a northern low-pressure trough to settle in over the Great Plains between the Rockies and the Great Lakes. The low-pressure system is bringing more moisture into the area than we have seen for a long time, along with a high probability of scattered pop-up severe weather, scattered fog, and increased electrical activity, aka lightning.

What did the hurricane say to Florida? “I have my eye on you.” That’s the weather joke for this week! Please send yours to weather@westrivereagle.com.

Stay safe and cool this week.