West River Eagle Editorial Board: Trump briefings and tweets are a danger to public healthFree Access 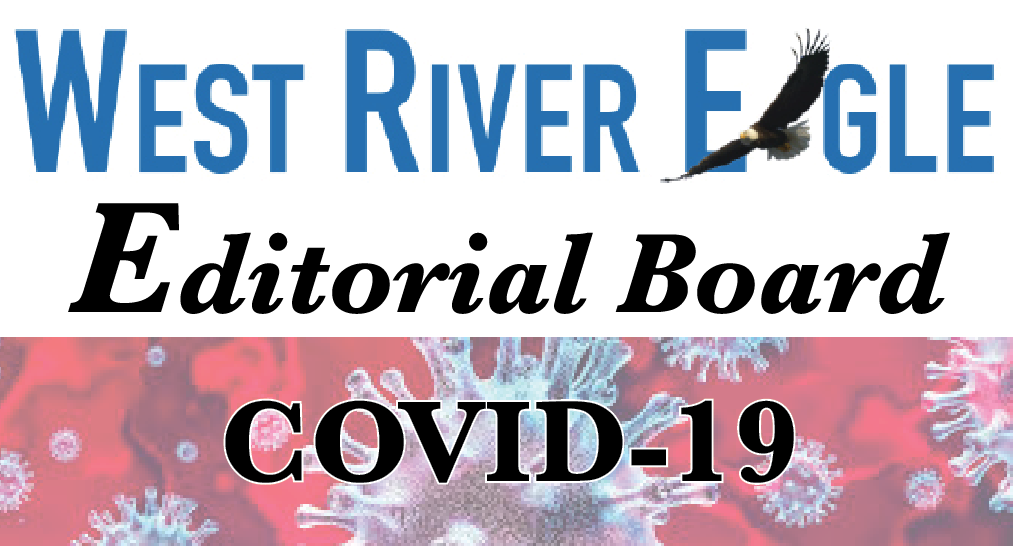 The COVID-19 virus is changing and challenging all aspects of American life. One effect is to break down political division in order to focus on the health of everyone. In this commentary, the editorial board of the West River Eagle would like to draw attention to the need for rapid, clear communication and decisive action across the political spectrum and an end to using any aspect of the COVID-19 pandemic for political gain.

According to covidactnow.org, with a minimum of three months social distancing over, 70% of the population in South Dakota may become infected by May 1 and the death toll may be 12,000. The risk is higher on Cheyenne River due to a more at-risk population and less access to health care.

We urge all readers to keep an open mind about media coverage and to ask questions about the slant of your media outlet. If you are unsure, we are happy to offer guidance that hews to the most reliable and centrist outlets. Take the most extreme action you can to keep yourself safe.

On March 23, Erik Wemple, a commentator for the Washington Post, offered a deeply concerning look into how much Americans do or do not trust the media. This question is vitally important as we face an epic public health crisis – a crisis which does not care if you are a Republican or Democrat, rich or poor, white or Native, rural or urban.

Wemple attended the CPAP conference (Conservative Political Action Conference) in February in Maryland. According to their web site, the conference is “the largest and most influential gathering of conservatives in the world.” There was a conversational theme at the conference that the media coverage of the COVID-19 pandemic was a hoax created to bring down the President.

In “man on the street” interviews, Wemple spoke to attendees who said they did not trust the media coverage about the virus. Their opinions highlighted “a paradox about President Trump. Here is a president who has told thousands upon thousands of falsehoods and lies. And, here is also a president whose people, whose followers, believe in him to an incredible degree. They are unwilling to shake their faith in the President’s truthfulness. And concomitantly, they also distrust the media. So, trust Trump completely and have a deep ingrained mistrust of the media. It’s that dynamic that gives the President, basically, some permissions to sugarcoat Coronavirus, to talk about it in ways that, he believes, help him politically and disregard the consequences.”

The political spin of the President and a large swath of Republicans and Democrats in Congress has been highly polarized around COVID-19. Thankfully, many conservative mayors and governors are stepping away from the party line in order to put the health of the people they serve before political gain. Our own governor, Kristi Noem, and Ohio governor Mike DeWine come to mind.

As they wade into the media noise about the virus, it is essential that all public figures speak clearly, calmly and from a solid basis in fact. This editorial board supports and endorses every recommendation made thus far by CRST Chairman Harold Frazier and the governor of South Dakota. We further urge the leadership of CRST, Ziebach County, and local municipalities to act quickly. Mayors and governors are the bulwark against this pandemic.

The challenge is to cut through the noise to reach the people directly, so that individuals will take swift action to limit their risk.

The problem is we have had terrible communication from our President, whose own words about the crisis have changed rapidly over the last two months.

Every time the President gives a press briefing, his words counter those of medical experts and his own staff. The President is hindering rather than helping the nation’s efforts to combat the pandemic.

One news outlet after another across the political spectrum has chronicled the comments of the President. Here are some highlights:

January 22, at the World Economic Forum in Davos, Switzerland, Trump said the U.S. does have a plan to contain the virus and that he thinks it’s “going to be handled very well.” He also said that he thinks China is in “very good shape.” In these early days, containment was the focus. Cases in the US are in the single digits.

February 24, Trump tweets, “The Coronavirus is very much under control in the USA. We are in contact with everyone and all relevant countries. CDC & World Health have been working hard and very smart. Stock Market starting to look very good to me!” US cases at 15.

February 26, during a press conference, Trump said, “I think every aspect of our society should be prepared. I don’t think it’s going to come to that, especially with the fact that we’re going down, not up. We’re going very substantially down, not up.” US cases at 16.

February 27, “One day it’s like a miracle, it will disappear.” Trump made this comment at a reception at the White House. At the time, the Centers for Disease Control and Prevention (CDC) was warning that COVID-19 would spread across the United States. US cases at 16.

March 4, “If we have thousands of people that get better just by, you know, sitting around and even going to work – some of them go to work, but they get better.” Trump made this comment during an interview on Fox News. At the time, the CDC was urging employers to have workers stay home. US cases at 98.

March 5, Trump tweeted, “NEVER said people that are feeling sick should go to work. This is just more Fake News and disinformation put out by the Democrats, in particular MSDNC. Comcast covers the CoronaVirus situation horribly, only looking to do harm to the incredible & successful effort being made!” US cases at 164.

March 6, “Anybody right now, and yesterday, anybody that needs a test gets a test. And the tests are beautiful. They are perfect just like the letter was perfect. The transcription was perfect. Right? This was not as perfect as that but pretty good.” A comment at a CDC facility in Atlanta, Georgia. At the time, the United States had only conducted about 2,000 coronavirus tests. US cases at 214.

March 10, “And we’re prepared, and we’re doing a great job with it. And it will go away. Just stay calm.  It will go away.” Trump made this comment while speaking with reporters on Capitol Hill after meeting with Republican senators. US cases 937.

March 12, When asked about reports of physicians being unable to test potential coronavirus patients, Trump said there were a “million tests out now” and that there will be 4 million in the following days. “If you go to the right agency, if you go to the right area, you get the test,” he said. US cases at 1629.

The covidactnow.org website makes projections of the window to take extreme proactive action on a state by state basis. It offers four levels of projection: take no action, three months of social distancing, three months of shelter in place, and three months of lockdown. It also maps out current levels of action across the country. South Dakota is in the “limited action” category with “public advocacy around ‘social distancing’ and enhanced hygiene. Minimal mandated restrictions.” The window for decisive action in South Dakota is March 29 to April 3.