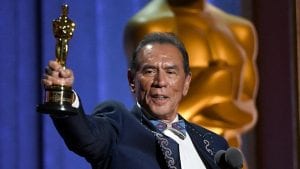 On Sunday, October 27, renowned 71 year-old Cherokee actor Wes Studi made history at the 11th Annual Governors Awards when he received the an Academy Award- the first time a Native American actor has ever received the honor.

“I am proud to be here tonight as the first Indigenous Native American to receive an Academy Award. It’s about time!” said Studi.

Studi has starred in dozens of films throughout his career, including Dances With Wolves, The Last of the Mohicans, Avatar, Powwow Highway, Geronimo: An American Legend, and Hostiles.

The actor was born in Nofire Hollow, Oklahoma and he spoke on Cherokee before attending the Chilocco Indian Agricultural School before graduating in 1964. Studi then enlisted in the National Guard and served in Vietnam for one year. He was also present at the Siege of Wounded Knee in 1973 and has used his fame to bring attention to the plight of the American Indian people.