Eagle Butte filled to the brim over Labor Day weekend as relatives gathered from far and wide to reconnect, celebrate, and mourn, as events of the first Cheyenne River Sioux Tribe powwow since 2019 spread throughout the powwow and rodeo grounds and up and down Main Street.

Event co-chair RJ Lawrence said the committee chose the theme “Remembering our Past, to Strengthen our Future” to acknowledge this event was one of remembrance as well as celebration. “We wanted to bring people together,” said Lawrence, “and it turned out amazing.”

This was the first powwow since the COVID-19 pandemic shut down celebrations in 2020 and 2021. Many families suffered loss in the intervening years. Lawrence, along with co-chairs John Kessler and Bernita In The Woods, wanted to make the event this year especially meaningful.

Lawrence estimates the population of Eagle Butte probably doubled over the weekend, from 5,000 to 10,000, with the influx of dancers, carnival-goers, rodeo participants and audience.

Tents and campers filled fields around the powwow grounds. Cars streamed in from across the reservation and the region to join the celebration and reunite with friends and family.

Organizers provided 58 port-a-potties and eight showers for attendees. Sixty extra security personnel were available throughout the weekend to look out for people and direct traffic.

Supper feeds at the school cafeteria fed over 950 people a night on Friday and Saturday, and over 1,200 people on Sunday and Monday.

Says Lawrence, “It was a lot of work, but it all turned out to be worth it in the end.”

Events got underway Thursday evening with the opening of the carnival and the Romey Gunville Saddle Bronc Memorial Chute Out at the rodeo grounds.

Friday was Kids Play Day at the rodeo grounds, followed by the Youth Rough Stock Series tournament. The horseshoe tournament got underway at the powwow grounds. The first Grant Entry of the weekend took place Friday night.

Dancing competitions continued Sunday through Monday. The Grand Entry on Saturday night was massive. Final dance competitions on Monday thrilled those in the stands.

Announcer Jerry Dearly did a wonderful job throughout the powwow. He and his team woke relatives up in the morning with inspirational thoughts over the PA. He read the names of veterans being honored as their flags were raised in a way that brought their memories alive.

Dearly interspersed his commentating with occasional jokes and requests for food, reunited people with lost phones and wallets, and made sure the audience appreciated all the dancers.

Veterans from Cheyenne River veterans organizations and veterans visiting from other locations participated in flag raising and lowering every day. Twenty-one flags flew over the powwow grounds, with the Cheyenne River flag in the center.

Veterans from CRST Veterans Service Office, Lakota Akicita, the Kit Fox Society, American Legion Post #308, and others carried flags of the United States, the Cheyenne River Sioux Tribe, the American Indian Movement, and the Lakota 38+2/Oceti Sakowin Treaty; along with ceremonial staffs of the Lakota Akicita, the Kit Fox society, and Cheyenne River veterans; in procession into Grand Entry and at the head of the parade.

Throughout the powwow, singers and drummers from Bear Butte, Wakiyan Maza, and Show Time Singers, led by host drum Standing Horse, supported the crowd in song and prayer. Honor and flag songs got the crowd on their feet in respect.

Vendors came from across the rez and the state to interact with the crowds: including the Warrior Women Project, South Dakota Democrats, KIPI 93.5 FM Radio, and others.

Listed below are the rodeo results from the CRST Open Rodeo that was held on Sunday, Sept. 4. 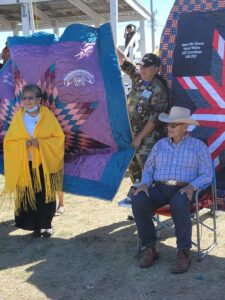 COURTESY PHOTO Benita Clark retired as CRST Treasurer-at-Large after 28 years of service. Ed Widow retired as Tribal Councilman for District 3 after 34 years of service at the age of 90. Both were honored at the powwow and were Marshalls of the Labor Day parade. Widow was driven through town in a horse-drawn wagon. While Clark rode perched atop a red convertible. 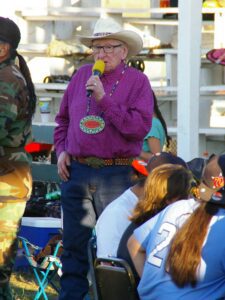 PHOTO COURTESY OF FRAN CARR Announcer Jerry Dearly came down from the crow’s nest to commentate on the results of the Royal Court. His beaded medallion says “eyapaha,” the Lakota word for announcer or town crier. 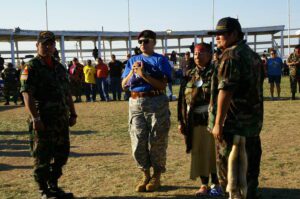 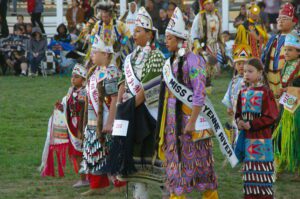 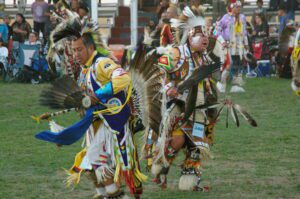 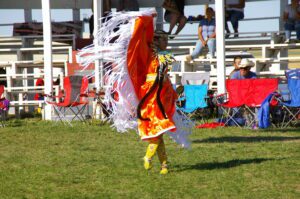 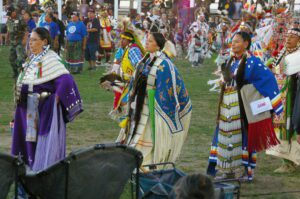 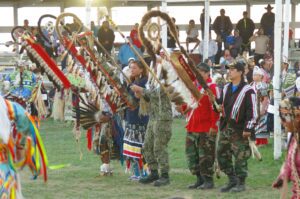 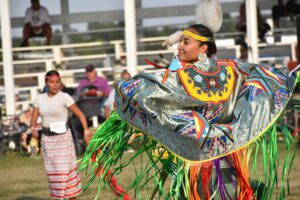 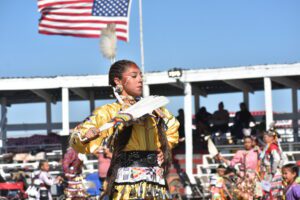 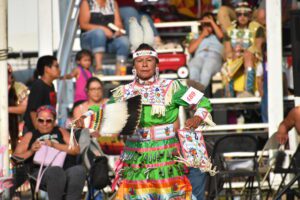 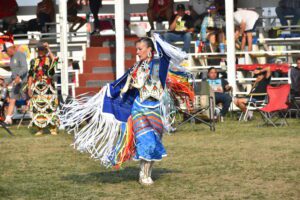 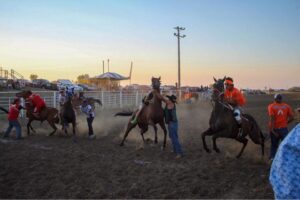 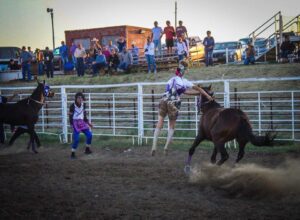 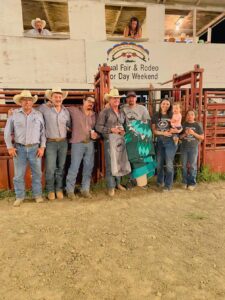 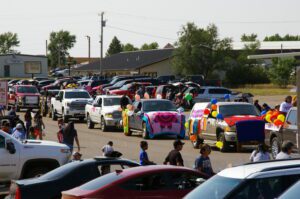 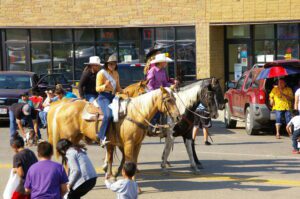 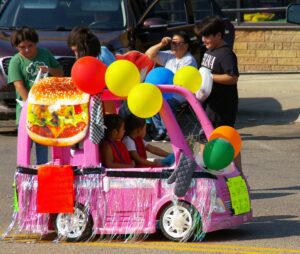