Most birders I know are list makers.  I have a life list, and I keep lists of the birds I see each year, subdivided by location:  state, county, yard.  At the end of the year, I tally them up.  And then on January 1, I make a list of the birds I hope to see in the coming year.  Most of the entries on this list are birds I expect to see in southeastern South Dakota.  But I also include some “reach” birds, species that will stretch my identification skills (“you’re bad at shorebirds,” my son often reminds me) or that will mean more time outside looking.  These are my new year’s resolutions.

The first bird on my 2021 list is a Dark-eyed Junco.  This seems fitting, somehow.  John James Audubon called the junco the Snow Bird.  They appear in our latitudes in mid-to-late October and depart in late April for their breeding grounds in Canada.  For three years running, I saw my first junco of the season on Halloween.  This year, their arrival at my feeders coincided with the first snowfall.

There are fifteen subspecies of junco in North America.  The form most often seen in South Dakota is the Slate-colored.  With its black back and hood, white belly, and pink bill, it stands out well against the snow, and it’s easy to spot when it’s flying away as it flashes its white outer tail feathers.  Look for them feeding in small flocks on the ground pretty much anywhere—roadsides, feeders, parks.

South Dakota is at the crossroads of eastern and western bird species.  The traditional dividing line, the 100th meridian, aligns roughly with the east/west river divide, and the far western species sometimes find their way here.  I had and Oregon Junco in my yard all last winter.  It has the same black hood and white belly but it’s brown back and orange sides make it stand out.  More importantly, one subspecies—the White-winged Junco—breeds only in South Dakota’s Black Hills.

For some birders, January 1 marks the start of a Big Year, a competition to find the most birds in North America in a calendar year.  The current record-holder, according to the North American Rare Bird Alert, is John Weigel, who saw 784 species in 2016.  My own lists are more modest.  I saw 131 species in 2020.  All of them were in South Dakota,  118 were in Clay County, and 60 were in my back yard.

I’m a pretty competitive person, so my listing has become an exercise in being happy with what I have.  While I would love to someday do a Big Year, I’m not sure where I’ll find the time and money, and the travel involved chasing down rarities raises serious ecological questions.  For 2021, I’m setting myself the challenge of finding as many birds as I can in my home county—that and finally seeing the owl I’ve been hearing in the yard every night. 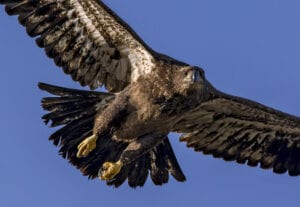