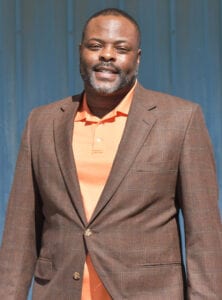 “Having a job makes people feel like they have dignity, that they have purpose in life. That’s sometimes a challenge for veterans when they transition into civilian life,” said Derek Howard, Vocational Rehabilitation Specialist with the Veterans Administration.

A former Chemical, Biological, Radiological, and Nuclear (CBRN) Specialist in the United States Army, Howard knows just how important it is for veterans have a complete support system that fosters mental and emotional well-being- important foundations for life after the military.

Howard workers as a “voc rehab” specialist with the VA’s Compensated Work Therapy Program. The program provides support to veterans living with mental illness or physical impairment with barriers to employment to secure and maintain community-based competitive employment.

For Howard, helping veterans is his passion.

The voc rehab specialist is currently working out of an office at the Rooks Funeral Home building in Eagle Butte, but that will change in the near future- the VA has just signed a 20-year lease to rent a space in the Keya building (formerly Presentation College).

“The Veterans Administration has demonstrated its dedication to helping veterans on Cheyenne River, and I am encouraged by this long-term commitment,” said Rodger W. Woeppel, Therapeutic Supported Employment Services Program Manager from the VA Black Hills Health Care System.

Woeppel explained that the CWT program has had a long presence on CRST and since the 90s, it has worked with the Tribe and entered into various memorandums of agreement with local businesses and organizations to help employee veterans.

“We have also worked with the local Indian Health Service hospital and have helped qualified veterans with placement in positions such as groundskeeping, maintenance, MSAs, dental assistants, and a variety of occupations. The hospital has been such a great partner in with this program,” said Woeppel.

In January, Howard was hired to fill the vacant position, and the voc rehab specialist who grew up in Queens, New York, said the experience of living in South Dakota on an Indian reservation has thus far “been an exciting adventure.”

Although his office is located in Eagle Butte, Howard lives at the manor in Timber Lake, and said living in that setting has changed some aspects of his daily routine, including his sleep pattern.

“At the manor, everyone is asleep by 8:30, so now, I fall asleep early and I’m now getting a full night’s sleep,” said Howard as he chuckled.

Waking up has also come with its own adventures- one morning, the voc rehab specialist woke up to find a snake curled up on his chest looking at him.

“I smacked that snake clear across the room and sprayed it with disinfectant spray. When I tell that story everyone has the same question- they ask, ‘What kind of snake was it?’ It doesn’t matter, it was a snake. I don’t do snakes,” said Howard as he playfully demonstrated with his hands how big the snake was.

Although it was only a few inches long, the snake might as well have been a python, said Howard.

Another experience on Cheyenne River that has touched the New Yorker is how veterans are respected and treated.

“I appreciate the generosity of the people here. Of all the places I’ve ever lived and worked, I have never been more welcomed than I have here. It’s amazing to see how veterans are held in high regard. They are not forgotten here,” said Howard.

“I appreciate the generosity of the people here. Of all the places I’ve ever lived and worked, I have never been more welcomed than I have here. It’s amazing to see how veterans are held in high regard. They are not forgotten here.”               -Derek Howard

Giving back to the veterans and being available 24/7 is important to the Army veteran, who holds two master’s degrees, one in social work and another in public administration.

“The CWT program doesn’t just help veterans find employment, what I do is provide therapeutic support to veterans who may be suffering from PTSD, who may have suicidal ideology, who may be battling addiction. The veterans in the program get therapy through work,” explained Howard.

When a veteran transitions from the military to civilian life, they often lose structure, purpose, and in many instances, face the sudden reality of being unemployed.

“Many vets don’t know what kind of jobs they can get with the skill sets they learned in the military. Take me for example, I was a CBRN specialist, but how do you translate that in the civilian workforce? I can help veterans with those kind of questions,” said Howard.

As a social worker, Howard implements the CWT program’s tenets into his daily mission: to provide evidence-based and evidence-informed vocational rehabilitation services. The program currently has several veterans who are employed with various tribal programs and businesses throughout Cheyenne River.

Howard describes his daily routine as “maintenance and therapeutic support.”

“I call veterans in the program to see how they are doing, to learn what their needs are. I also check on our veterans who are working directly with COVID operations on Cheyenne River. Many times I call veterans and ask them, ‘How is your spirit?’ Having a strong veteran culture helps other vets from feeling and being isolated,” said Howard.

Being available and ready to assist and listen is important to Howard, who encourages veterans to pick up the phone and call him, especially when they need someone to talk to.

“No matter if you are in the CWT program or not, I am here to help. I may not have an answer right when you ask, but I will point you in the right direction. I am committed to helping our heroes and I’m in it for the long haul,” said Howard.