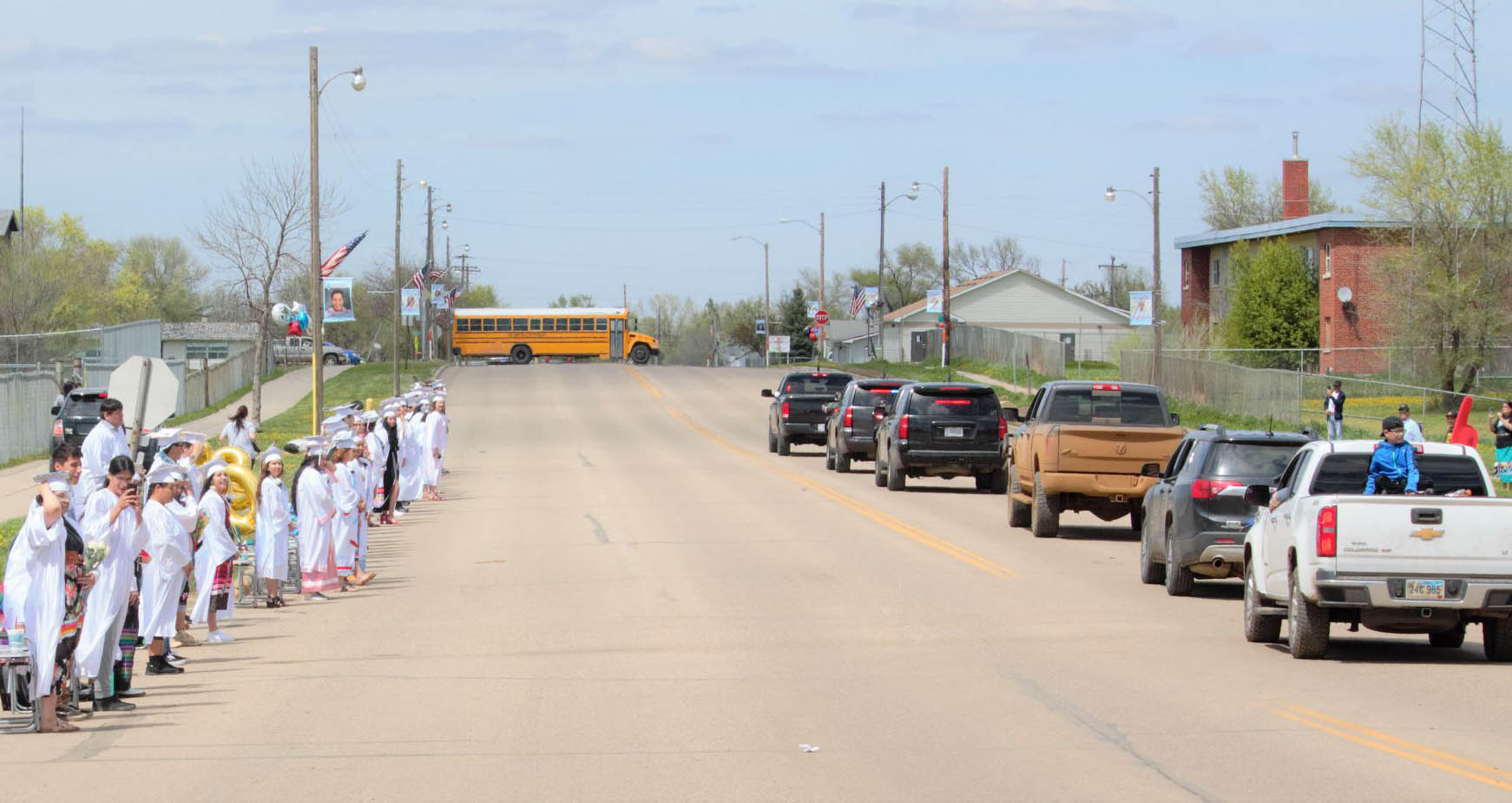 PHOTO FROM EAGLE BUTTE TRANSPORTATION FACEBOOK PAGE
The Cheyenne-Eagle Butte Class of 2020 rise as a caravan of vehicles drive by in a show of support and love. Due to COVID-19, the graduation parade took place in lieu of a traditional commencement ceremony and over 500 vehicles participated in the parade which last over half an hour.

Sunday was a busy day for three area high schools- Cheyenne-Eagle Butte, Dupree and Takini as each school held its own unique graduation ceremony. The coronavirus pandemic wreaked havoc on high school commencement plans and left school administrations scrambling to come up with new plans that would ensure the safety of students, families, and faculty.

In Eagle Butte, a collaboration between C-EB and the City of Eagle Butte resulted in a graduation parade down Main Street. Chairs of honor were set up on the sidewalk east of C-EB High School and were carefully placed six feet apart so grads could maintain social distance.

The day before the event, City of Eagle Butte employees hung banners that had each students’ photos from both C-EB and Windswept Academy. Weeks prior, City Finance Officer Sheila Ganje coordinated a photo shoot with school staff in order to get portraits of all the graduates. Ganje also worked with Dupree School and helped order banners that which were also displayed in downtown Dupree.

KIPI radio set up speakers and played pre-recorded messages from Tribal officials. Families decorated their vehicles with balloons, photos, banners and ribbons congratulating the young men and women. The parade kicked off around 2 p.m. and the was led by local law enforcement vehicles.

City of Eagle Butte Transportation workers and Officer Norman Schuler conducted traffic control as the parade of over 500 vehicles slowly made its way downtown. Drivers loudly honked their horns as they drove by the 50+ graduates.

The parade last over half an hour and was a bumper-to-bumper showcase of love and support for the Braves.

In Dupree, unfavorable weather caused a change in plans for the Tigers. Originally scheduled for Saturday, rain and wind caused a one-day postponement of the outdoor graduation ceremony. On Sunday evening, the ceremony took place at the Tigers’ football field and was followed by a Parade of Graduates down Main Street.

Excitement filled the air as seniors reunited on the field—many of the students had not been seen each other since school was cancelled in March to do due to the COVID-19 pandemic.

Pomp and Circumstance was played as the graduates were led into the program by Junior Class escorts Malory Peacock and Megan Hinrichs.

Once everyone was settled, Superintendent Gail Swenson welcomed everyone and Shantell Brewer gave her valedictorian speech. Co-salutatorians Chessa McDaniel and Sidni Ferguson followed with their own speeches. Kim McDaniel served as the commencement guest speaker.

During the program, the seniors were recognized for their academic achievements, the scholarships they earned, and their involvement in activities while in high school.

Adhering to social distance protocols was important to the school administration and after Principal Budmayr presented the class, two guests of each senior presented the diploma to their honored graduate. In return, the grad gave white roses to their special guests.

As the graduates exited the field, their recessional, “Hey, Look Ma, I Made it” was played. The students then walked down Main Street where family members and supporters awaited their arrival.

In Skyhawks country, Takini graduates enjoyed an outdoor ceremony as well. The Takini School parking lot was turned into a dazzling ceremonial gathering place as 14 tables were set up and decorated with blue cloth and flowers for each of the graduates and their two guests.

Everyone in attendance wore face masks and each Takini senior was given a blue mask that was designed with the word, Skyhawks on it.

Other family members enjoyed the ceremony from the safe distance in their vehicles and they honked their horns as each graduate was recognized.

Spiritual leader Vernell Sitting Crow served as the MC and to open the ceremony, he conducted a prayer and four directions song.

As each graduate was called to center stage, they were escorted by their special guests, and it was they who handed the diplomas to the honored students. Each student received a new star quilt and every young woman was presented with an eagle plume, and each young man, an eagle feather.

The school board also recognized Superintendent Kit Veit for her dedicated service and she was presented with a yellow star quilt that had patterns of sunflowers. An eagle plume was tied in her hair as Sitting Crow announced that she was given the name, Wichapi Thoka Win (First Star Woman).

To end the ceremony, the seniors rose and were presented as the class of 2020. Everyone in attendance applauded and those in the parking lots honked their horns. A to-go meal was served to everyone. 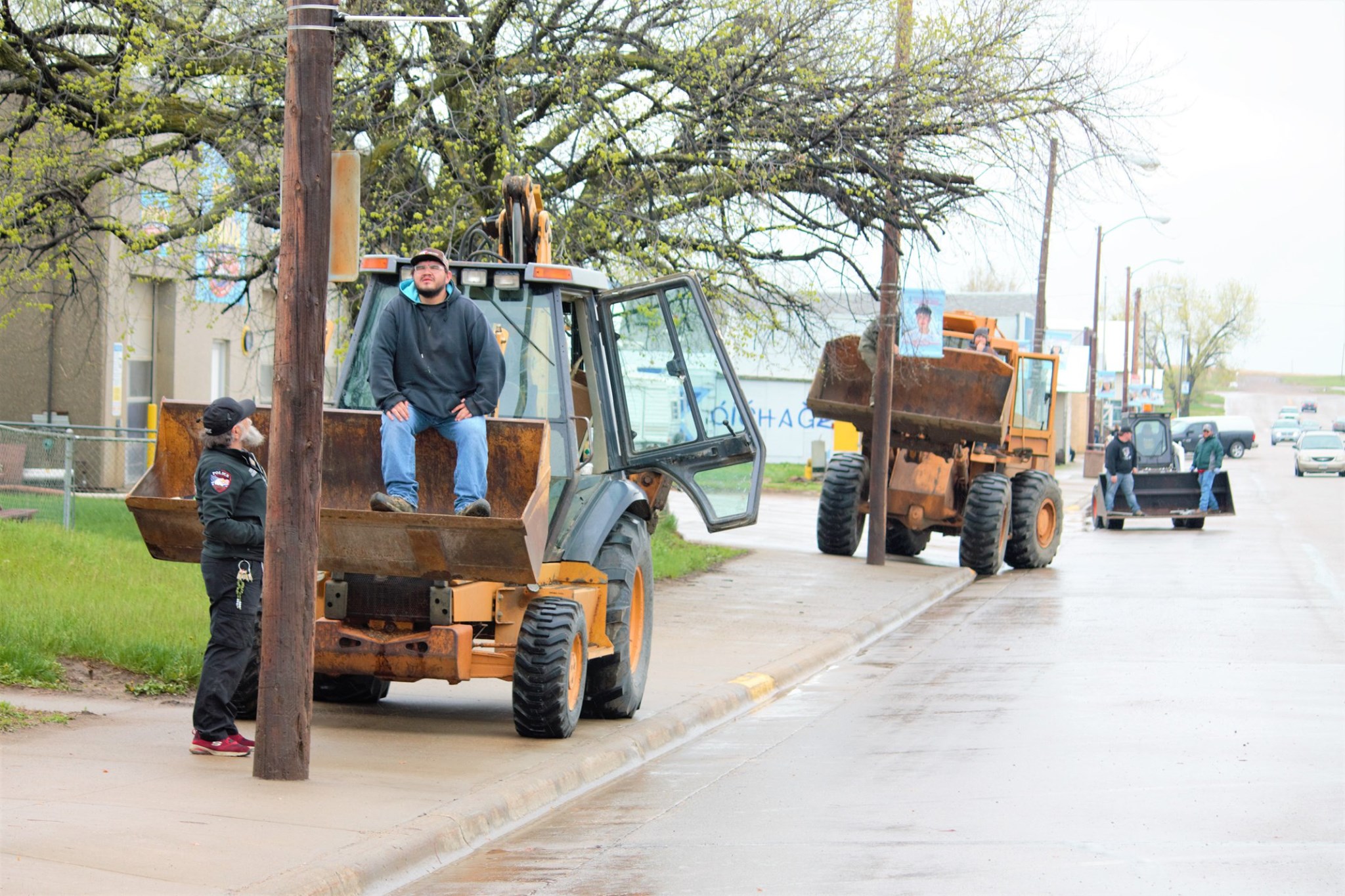 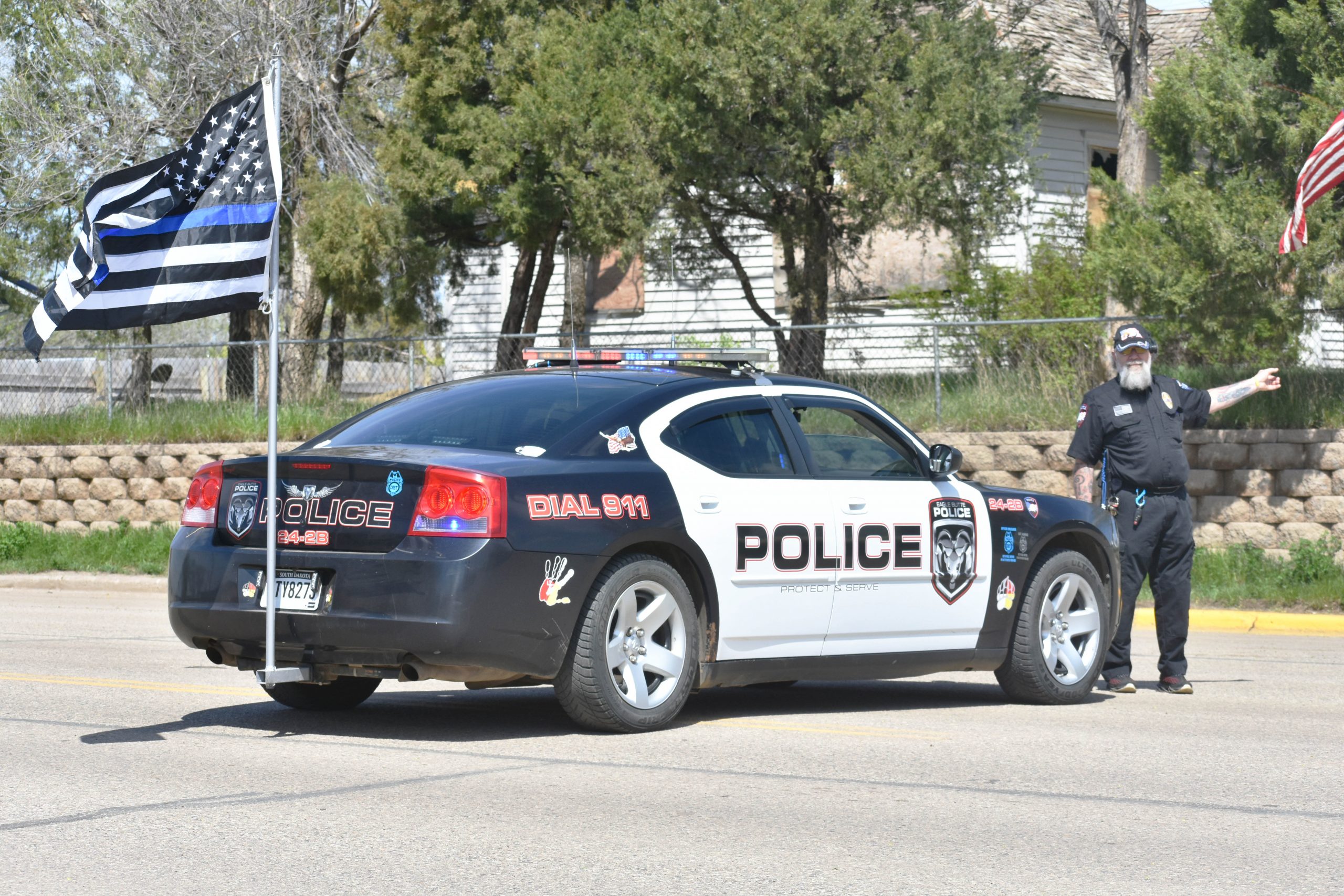 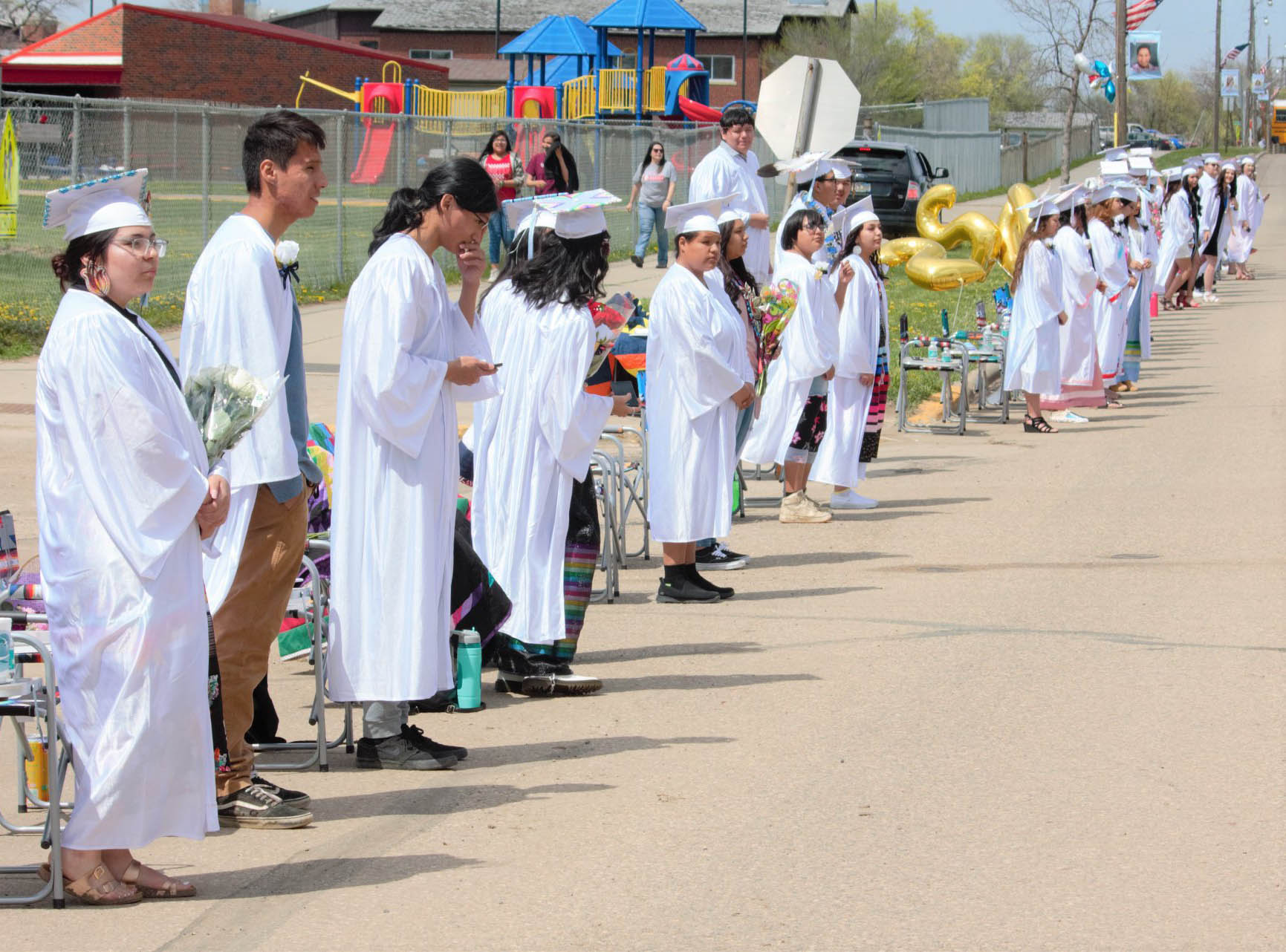 PHOTO FROM EAGLE BUTTE TRANSPORTATION FACEBOOK PAGE
C-EB Braves Class of 2020 stand as the parade of over 500 vehicles drive by in show of support of the graduating class. 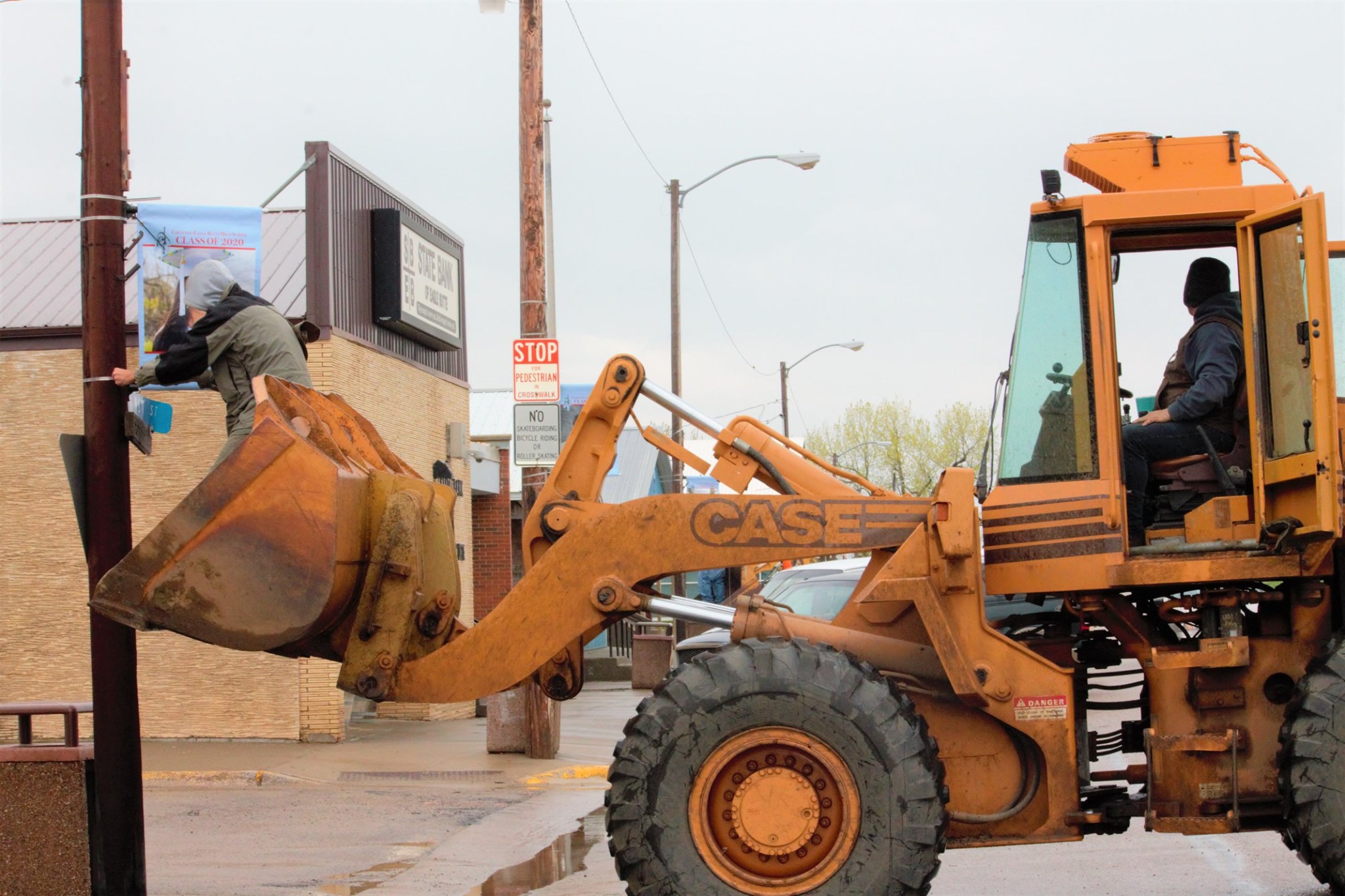 PHOTO FROM THE CITY OF EAGLE BUTTE FACEBOOK PAGE
City of Eagle Butte employees work diligently to display over 50 banners on Main Street. The City purchased the banners which featured the photo of name of graduates from C-EB and Windswept Academy. 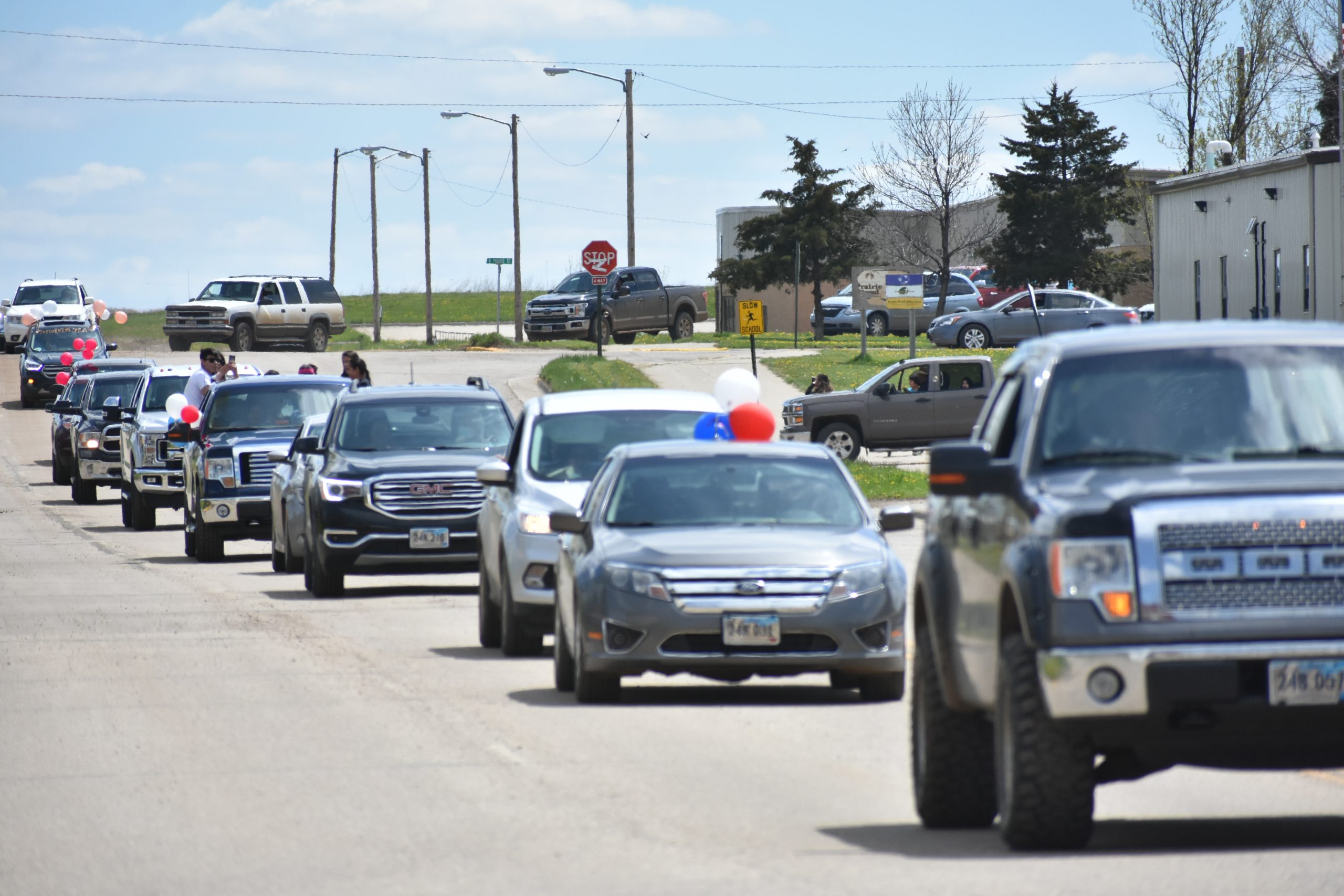 EAGLE PHOTO BY ALAINA BEAUTIFUL BALD EAGLE
In lieu of a traditional graduation ceremony, C-EB held a first-ever graduation parade. The event adhered to social distance guidelines and provided a way for the community to show their appreciation for the C-EB seniors. 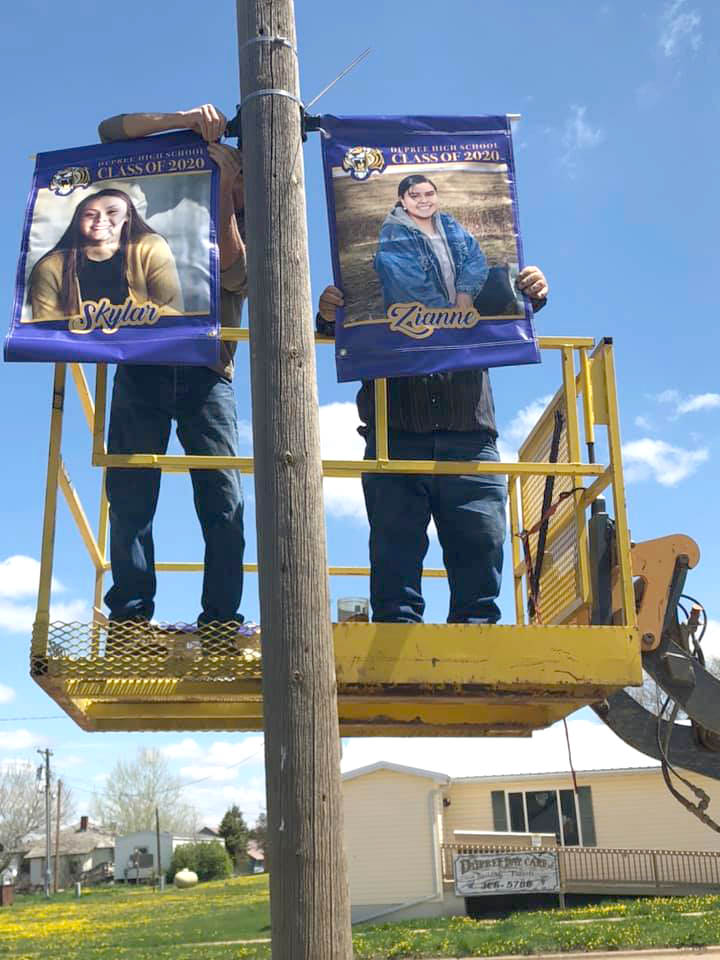