SIOUX FALLS, SD – The U.S. Attorney’s Office for the District of South Dakota participated in this year’s Sioux Falls PRIDE Festival on Saturday, June 16, 2018, as part of its ongoing effort to increase awareness of the various civil rights protections available to South Dakotans under federal statute.

The U.S. Department of Justice enforces a number of laws that prohibit various forms of discrimination in areas covering employment, education, housing, police practices, and other Department-funded programs. Although these laws do not explicitly refer to sexual orientation or gender identity, they prohibit sex discrimination, which protects all people from gender-based discrimination.

If you believe you have been discriminated against, or that your civil rights have been violated, please contact the Civil Rights Section of the U.S. Attorney’s Office by calling (605) 330-4400, or by sending an email to Alison.Ramsdell@usdoj.gov.

The U.S. Department of Justice also enforces the Matthew Shepard and James Byrd, Jr. Hate Crimes Prevention Act of 2009, which makes it a federal crime to willfully cause bodily injury, or attempt to do so using a dangerous weapon, because of the victim’s actual or perceived sexual orientation, gender identity, or disability. To report evidence of a hate crime, please contact your local Federal Bureau of Investigation field office, which can be found at www.fbi.gov/contact-us/field/field-offices. ### 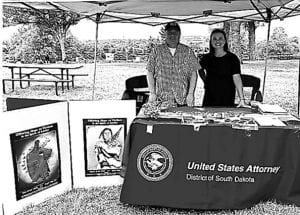