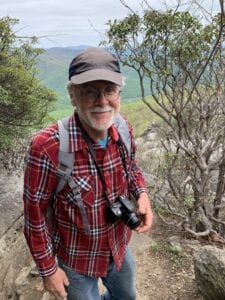 PHOTO BY MEG WEST David West at home in the Blue Ridge Mountains of Virginia.

Earlier this year the West River Eagle reported on two very early cases of COVID-19 in Albemarle County, Virginia. One of the men, Freeman Allan, has connections to Cheyenne River and had been here in the summer of 2019. We contacted Allan and his friend David West to ask about their recovery and any long-term effects.

David West of Crozet, Virginia, is in his sixties and became sick in January. He was probably one of the very first cases on the East Coast. Because coronavirus was so new, he was never tested.

West’s friend Freeman Allan of Charlottesville contracted coronavirus from West in early March. Allan was tested and is a documented case of COVID-19. Because of his positive diagnosis, both he and West are sure West also had COVID-19.

West is still unsure how he contracted the virus. There are two possible sources from December 2019 but neither were as sick as West would become. His brother had been to Italy earlier in December. Both the brother and his wife had a little dry cough. West saw them at Christmas. A few days later West had dinner in a crowded Asian restaurant with a relative who had come from China a couple of weeks before.

Says West, “I came down with it in late January and of course, they didn’t think it was possible then, but I’m almost convinced by hearing stories of other folks who had it as to what I had. A nurse friend said to me at one point, ‘Well, you’ve had the flu before, was it like the flu?’” Says West, “It was the flu on steroids.”

Being Immuno-Compromised Made Symptoms Worse

West thinks the illness was more severe for both him and Allan because they had Lyme disease in the past and have a more weakened immune system as a result. “My take on it is, my immune system is working every day keeping that down. So I’ve become much more susceptible to when something else comes along,” said West. “I am much more prone to get sick now because I think my immune system is already compromised or working on keeping Lyme at bay.”

Not knowing any better, West did not isolate from his wife or family. His wife did not come down with COVID. “That is what is so remarkable because I thought it was the flu when I had it. My wife was totally exposed to it and had no symptoms whatsoever. So I think if you’re got a decent immune system you can keep it at bay, because she certainly was fully exposed for a good number of weeks.”

West had a very high fever for five days, as high as 104, and then moved on to pneumonia symptoms. Because he thought he had the flu, he did not go to the doctor. When his brother, a physician, heard a week later that West was feverish again, he became concerned.

The high fever left West hallucinating and feeling like he was on a bad psychedelic trip. “Your brain can’t focus on anything. I had none of that with the flu. It’s got kind of a nightmarish quality to it if you get a serious infection from it. I can’t even remember an illness where I’ve had that.”

He said he likes to do Sudoku to pass the time and that it became, “this nightmarish thing where your mind is going over and over – Is it this number? Is it that number? – and it’s just crazy, getting into these crazy nightmares and it’s very hard to relax.”

Oddly, he said the screensaver on the TV was very soothing. “Watching those fish and those other things that Apple TV puts there. I could sit there for a good length of time and watch those because other things could be very disturbing.”

West suggests people take this very seriously and get help much sooner than he did. “If you start experiencing any kind of shortness of breath, this is a very serious symptom that you better deal with it quickly because you can go down really fast when you start having pneumonia. I guess that was the thing I learned from it. Take those signs very seriously. Because you when you start de-oxygenating, it can happen fast and things get shut down in your body.”

He laughed, “You know, all us guys, these older guys, we’re kind of stoic about that! Oh, yeah, it’s a little shortness of breath, I’m not worried about it. That’s not the way to deal with this thing, not at all.”

West says he’s pretty normal now. “Where you start from with COVID when you have it, I couldn’t even walk to the bathroom. For a while I could hardly stand up. The thought of going up and down the stairs was absolutely impossible. You’re coming from a point of total exhaustion. When I think back on that I’m pretty normal now,” he said.

West commented on the duration of his recovery saying, “A physician friend said, at your age if you had a three-week event, it probably takes two or three times that long to get back to some kind of good level. I had a serious event for at least three weeks, maybe longer than that. So it probably took me between six and nine weeks to come back from it. At least two months after the event was when I started to feel okay.”

Antibodies in Plasma Donated to Patients

Ten months later Allan is still showing antibodies against the coronavirus in his blood. Based on that, West assumes he has them too, but he still follows all the guidance to avoid reinfection. He noted that current guidance, even if you get the vaccine, is still to wear a mask and practice social distancing.

Allan has had antibody confirmation three or four times since his initial infection. The most recent test was October 31.

“It’s called virus neutralizing antibodies and I have had them. I don’t know the level, but I have had them at a level that is significant enough for the Red Cross that they keep calling me to come back and donate plasma.”

Allan has asked personnel at the Red Cross if the continued presence of antibodies means he is not likely to catch the virus again. Apparently, the tests do not indicate if the level of antibodies in Allan’s blood has changed over time so there is no reliable way to know if he or West could be reinfected.

Thinking it won’t happen to me.

In closing, West said he would not hesitate to get the vaccine. In normal times, he said, you can debate with yourself if you should get a flu shot. “The flu is three days of misery and then you get over it. But this? You would not debate if you had a choice to take a vaccine against this thing because it was a monster.”

Allan says, “It’s just such a sneaky, sneaky thing.” He said it’s easy for people, especially young people, to say, “Oh, it’s not going to get me. Well, you know, it’s going to be like a real bad cold, but I’m in good health.”

He challenged that way of thinking, saying, “When it does get you, and it takes you the way it took me and Dave, putting us on our backs entirely, it changes your temperature in terms of what you’re talking about.”