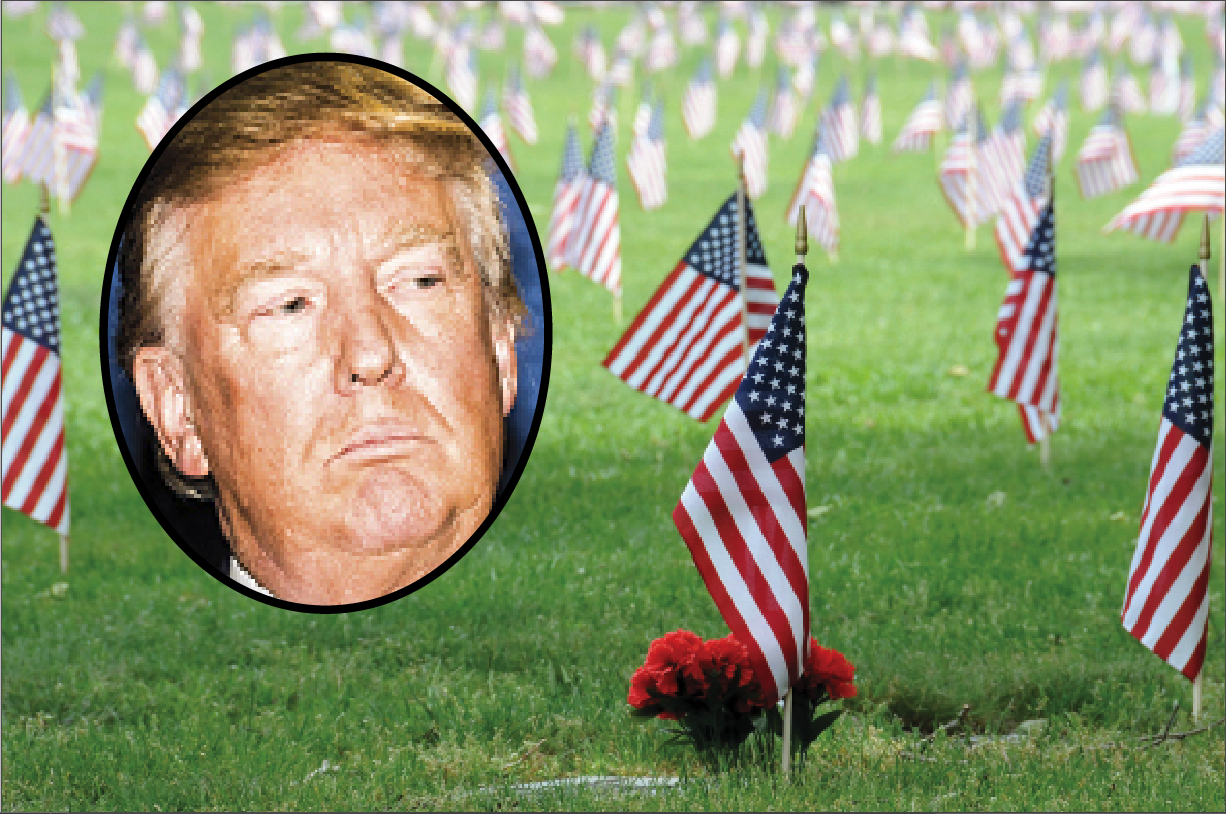 Backlash over President Trump’s alleged derogatory remarks about fallen members of the military swept the nation by storm over the Labor Day weekend.

On Sep. 3 The Atlantic published a story claiming that in 2018, Trump called American war heroes “losers” and “suckers”, and that he canceled a visit to the Aisne-Marne American Cemetery near Paris, France because of his vanity.

“He blamed rain for the last-minute decision, saying that ‘the helicopter couldn’t fly’ and that the Secret Service wouldn’t drive him there. Neither claim was true. Trump rejected the idea of the visit because he feared his hair would become disheveled in the rain,” wrote Jeffrey Goldberg, Atlantic editor-in-chief.

Aisne-Marne American Cemetery is a World War I cemetery that contains the graves of nearly 2,300 American Marines, and more than 1,000 names on the Walls of the Missing, most of whom fought in the vicinity and in the Marne Valley in the summer of 1918.

“He [Trump] did not believe it important to honor American war dead, according to four people with firsthand knowledge of the discussion that day. In a conversation with senior staff members on the morning of the scheduled visit, Trump said, ‘Why should I go to that cemetery? It’s filled with losers’,” Goldberg reported.

According to the Atlantic reporter, “In a separate conversation on the same trip, Trump referred to the more than 1,800 marines who lost their lives at Belleau Wood as ‘suckers’ for getting killed.”

On Sunday, Former Secretary of Defense Chuck Hagel, a Vietnam War veteran and two-term Republican senator, said if Trump’s reported comments are true, “It’s beneath the dignity of any commander in chief. Truly, they’re despicable.”

“Let’s go back and look at Mr. Trump’s words himself coming out of his own mouth starting in 2016 with what he said about John McCain and what he continued to say about McCain,” Hagel said.

During his presidential campaign in 2015, Trump was asked if it was appropriate for a man running for the country’s highest office to refer to McCain, a war hero and Navy pilot who became a prisoner of war after his plane was shot down over Vietnam — as a “dummy.”

“He [McCain] lost [the 2008 election], so I never liked him as much after that because I don’t like losers…He’s not a war hero. He’s a war hero because he was captured. I like people that weren’t captured,” Trump responded.

Hagel also cited how Trump has degraded the service of Generals Mattis and McMaster, and most recently, Gen. Kelly.

“The history of this president over the last three and four years is pretty clear,” stated Hagel.

The president has vehemently denied The Atlantic report, stating on Twitter, “I would be willing to swear on anything that I never said that about our fallen heroes. There is nobody that respects them more.”

“Donald Trump has the greatest respect for the men and women of our armed forces. I’ve traveled all over the world with the president and watched him interact with men and women of our military. I’ve seen him fight to make sure they have the resources they need,” stated Sanders.

Several media outlets, including Fox News and the Associated Press, have confirmed many of the quotes used in The Atlantic story.

Fox News correspondent Jennifer Griffin confirmed key details of the report, stating, “Not every line of the Atlantic article did I confirm, but I would say that most of the descriptions and the quotes in that Atlantic article. I did find people who were able to confirm… I can tell you that my sources are unimpeachable.”

Furthermore, Griffin shared that a White House source confirmed that during a planning session for Trump’s July 4th military parade, the president said the inclusion of “wounded guys” is “not a good look”, and that “Americans don’t like that” [referring to wounded veterans].

Trump has since called for Griffin’s firing from Fox News.

“Republican leaders are not standing up for our active duty military, wounded warriors, or those who paid the ultimate price. Could they at least take a knee and show some respect? Putting party before country is a path to totalitarianism,” said Nesiba.

Remi Bald Eagle, Vice Commander of American Legion Post 308, whose military career spanned over 20 years, stated, “I am a combat veteran. It is important for veterans to speak up because our active duty Airmen, Marines, Soldiers and Sailors cannot condemn the president’s actions. The worst tragedy in all of this is that men and women of honor have to call him their Commander-in-Chief.”

Goldberg said his report was just the tip of iceberg and he fully expects more reporting and confirmation about Trump’s actions in the upcoming weeks.