Trump came and went, and yet, we are still here 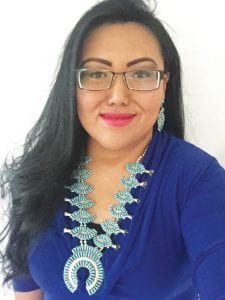 In the weeks leading into President Trump’s visit to South Dakota, I encountered many different opinions and voices about the event. Some people were strongly opposed to the presidential visit, while others expressed a deep sense of patriotism and pride. Donald Trump is one of the most polarizing presidents this nation has ever seen, and it is not hard to find those who adore him and those who despise him.

His address at Mount Rushmore on July 3 was not surprising. The words spoken by the president and Governor Kristi Noem were just what was expected: whitewashed.

What happened at Mount Rushmore was exactly what was going to happen and what has been happening for over 500 years- it was colonizers celebrating colonization.

As an indigenous woman, as a person with brown skin, as a citizen of the Diné Nation, nothing about Trump’s actions words and actions were remarkable, in fact, they were textbook.

Trump continued his anthem of cultural division and not once did he mention the Lakota people in whose homeland he was a guest.

Just one week before, the Lakota, Northern Cheyenne and Arapaho commemorated the 1876 defeat of the 7th Calvary at the Little Bighorn. The ancestors’ triumph over Custer and his men is still the most decisive Native American victory and the worst U.S. Army defeat in the Indian Wars.

Was there any mention of this? Of course not.

In America there is a collective and selective amnesia where true history is conveniently forgotten, swept under the rug, whitewashed or worse, not taught.

But the nation is changing- the people are awakening and seeing what we have known since 1492- colonization, capitalism and patriarchy are the ammunition of a people whose connection the natural law were severed long ago.

This awakening has now become a movement rooted in indigenous teachings and example. It is a call back to balance with natural law and it is a revolution, seen and unseen, that cannot be stopped.

Noem spoke. Fireworks were lit. Trump came and went…and yet,

We are still here.

We are still Lakota.

We are still Diné.

We are still connected.

Our teachings, our culture, our language, our prayers will continue on. We have survived 500-plus years of Donald Trumps and will continue to survive.

We are still here.