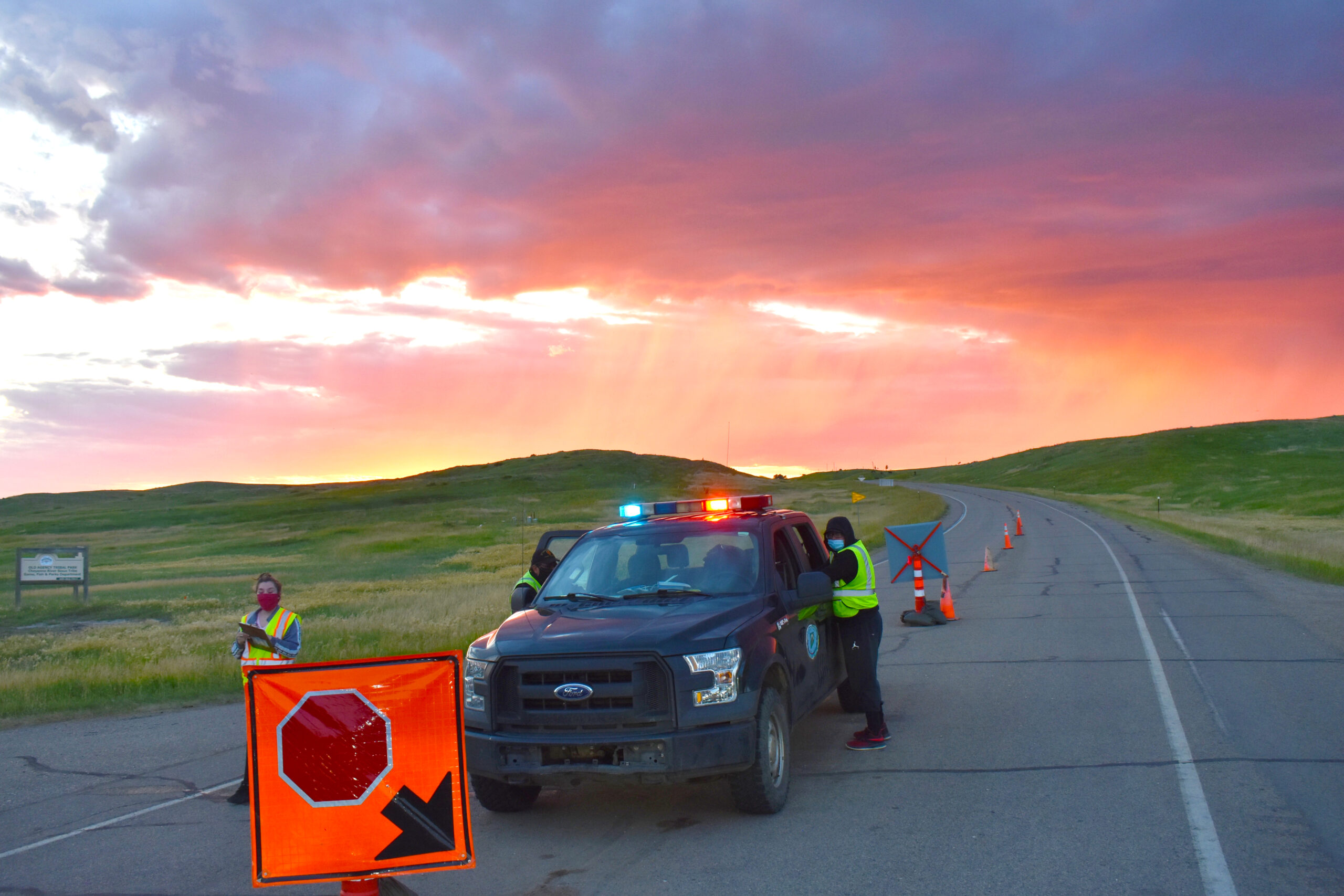 A suit was filed in Federal court in Washington, DC, on June 23 on behalf of the Cheyenne River Sioux Tribe against members of the federal government.

The suit names Donald Trump in his official capacity as President of the United States, along with members of the White House, Department of the Interior and Bureau of Indian Affairs.

At the heart of the suit are actions taken by the defendants in May and June as a result of a plea from South Dakota Governor Kristi Noem to the White House and other federal entities to force the Tribe to remove checkpoints on US Highway 212 and State Highway 63. Those named in the suit tried to pressure the Cheyenne River Sioux Tribe by threatening to take tribal law enforcement ability away from the Tribal government. The government is “fishing” for excuses and trying to “pressure us any way they can,” Cheyenne River Sioux Chairman Harold Frazier told the Rapid City Journal.

In early April, the Cheyenne River Sioux Tribe instituted Tribal Health Safety Checkpoints to prevent the spread of COVID-19. According to the New York Times, “The tribes have checkpoints that limit some drivers from passing through or stopping on the reservations in order to prevent the spread of the coronavirus. Frazier and Julian Bear Runner, president of the Oglala Sioux Tribe, contend that tribal sovereignty and treaty rights allow them to set checkpoints up on reservation land and control who enters.”

The suit requests relief in the form of a ruling

• that Assistant Secretary of Indian Affairs Tara Sweeney’s order demanding that the checkpoints be shut down is “arbitrary and capricious, an abuse of discretion, and otherwise not in accordance with law;”

• that concerted efforts to shut down the checkpoints “breached the federal government’s trust duty to the Cheyenne River Sioux Tribe and its members;”

• enjoining all defendants from taking any further action to interfere with checkpoints, resume jurisdiction of tribal law enforcement under Public Law 93-638, or convey threats to the Tribe’s COVID-19 funding under the CARES Act;

• granting other such relief are the Court deems just and proper

The complaint was filed by three attorneys of the Big Fire Law and Policy Group, Nicole E. Ducheneaux, Rose M. Weckenmann and Judith A. Shapiro. In it they deftly lay out the special threat of COVID-19 to Cheyenne River.

The suit alleges that disparities in transportation, health, race, housing and communication infrastructure put the community at special risk.

The complaint states, “COVID-19 has put the Cheyenne River Sioux people in dire jeopardy. Remoteness, millions of acres of land, and a historically failed trust mean a lack of adequate infrastructure. Residents of outlying communities must travel up to ninety miles to reach basic Indian Health Services (“IHS”) medical care at the Tribal headquarters in Eagle Butte, South Dakota.”

The community is at risk due to underlying health disparities in rates of cancer, diabetes, heart disease, asthma. Racial discrimination leads to higher rates of unemployment, disability and poverty.

According to the complaint, the Tribe has scant medical resources available in a very large area- “The Tribe’s IHS facility in Eagle Butte, South Dakota, has only eight in-patient beds, six ventilators, two negative pressure rooms, inadequate staff, and zero respiratory therapists to care for the Reservation’s 10,000 resident Tribal members. If more advanced medical intervention is needed for a COVID-19 patient, IHS has indicated that the patient will be transferred to an off Reservation facility, the closest of which is 175 miles (three hours) away.”

Actions Leading Up to This Point

On April 1, 2020, the Cheyenne River Sioux Tribal government issued its first Emergency Executive Order related to the COVID-19 pandemic. This Order implemented the first Health Safety Checkpoint plan consistent with the Tribe’s jurisdiction over roads and lands within its territory.

The authors advocate that, “The Cheyenne River Sioux Tribe’s checkpoint, monitoring, and contact tracing system have been so successful that the Tribe has had only six reported cases of COVID-19 on its Reservation, and each of those cases can be traced to entries identified through the Tribe’s Health Safety Checkpoint informational system. To date, there has been no community spread of COVID-19 and no deaths.”

The authors cite legal precedence that the Tribe has “an inherent right to exercise civil jurisdiction over nonmembers with respect to ‘conduct [that] threatens or has some direct effect on the political integrity, the economic security, or the health and welfare of the Tribe.’ 450 U.S. 544, 566 (1981). It is difficult to think of an instance in which the conduct of nonmembers entering the Reservation could pose more of a threat to the Tribe’s health and welfare than it does during the present outbreak of COVID-19. [emphasis added] Moreover, in any test of balancing interests, the Tribe’s checkpoints pose only a minor inconvenience to non-Indian motorists when compared to the seriousness of the threat of COVID-19 to the Reservation.”

At issue in the complaint is pressure on the Tribe from federal representatives in the form of a threat to take over tribal law enforcement if the checkpoints are not removed. The federal government could exercise this power under Public Law 93-638.

The complaint says, “A contract under P.L. 93-638 is a mechanism by which a tribe may contract with the United States to operate functions, like law enforcement, otherwise performed by the federal government as a function of the United States’ trust duty to tribes. Reassumption of a P.L. 93-638 contract is an extraordinary remedy that impairs the self-government and sovereignty of an Indian tribe.”

The complaint states that Sweeney violated Public Law 93-638, the 1975 Indian Self-Determination and Education Assistance Act, which “limits circumstances in which the Secretary may interfere with an ongoing P.L. 93-638 contract: Only if the Secretary determines that a Tribe’s performance under a contract involves “(1) the violation of the rights or endangerment of the health, safety, or welfare of any persons; or (2) gross negligence or mismanagement in the handling or use of funds,” may the Secretary “after providing notice and a hearing on the record to such tribal organization, rescind such contract or grant agreement, in whole or in part, and assume or resume control or operation of the program, activity, or service involved if he determines that the tribal organization has not taken corrective action as prescribed by the Secretary to remedy the contract deficiency.”

The argument is that “Defendant Assistant Secretary Sweeney has no lawful power to interfere with the internal governance of a Tribe and then pivot unilaterally to sever a contractual relationship as a punitive action for the Tribe’s refusal to relinquish its sovereignty.”

There has been no response from the Department of Justice, the White House, Governor Noem or the court as of yet.