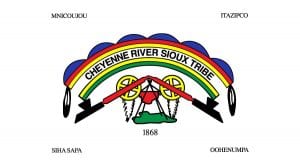 The Bureau of Indian Affairs its own separate budget, said Longbrake.

Spring storms and historic flooding further damaged infrastructure, resulting critical conditions of roads and culverts. In response, the Tribe declared a state of emergency in both March and May.

These storms were categorized as either Federal Emergency Management Agency (FEMA) or Emergency Relief for Federally Owned Roads Program (ERFO) storms, said Longbrake, who explained that his office has identified over 67 sites that had storm damage. Repair estimates totaled over $10 million.

“With a $2.2 million budget, it would take years to for our department to fix those. This additional funding is welcomed,” said Longbrake.

There have been five FEMA-categorized storms that occurred in South Dakota this year, and three of those affected Cheyenne River. Longbrake said that FEMA operates differently than ERFO, because it reimburses 85% of the expenses incurred after repairs are complete, while ERFO pays 100% of costs upfront.

“We turned in 32 sites into ERFO and what was approved was just a portion of that,” he said.

Although the funding is approved, there is still a process that must occur before the Tribe actually receives the funds.

“It’s a slow process than what Tribes need and what people want. While this additional funding is helpful, the process is long and drawn out. When the storms first hit, I was hoping that by this fall we would have funding. It looks like it won’t be until spring that we might actually get it,” explained Longbrake.

For the past few months, Chairman Frazier, Longbrake, and several tribal councilmembers have made multiple trips to Washington DC to meet with different federal agencies about the deteriorated road conditions on Cheyenne River. Their efforts culminated in a visit with Department of Transportation Secretary Elaine L. Chao that resulted in dialogue with agency leaders to investigate funding and other resources the Tribe could access or be qualified to utilize.

Although Chairman Frazier welcomed the $5 million, he reminded the public and federal agencies that road repairs across Cheyenne River, including damage from this year’s storms, is estimated to cost $120 million.

“I’m happy that the Federal agencies we have been able to assist us with these funds. We are still a long way from fixing all our roads but I am working to secure additional funds to get our roads in better shape,” said Frazier.