On October 20-21 a treaty meeting was held at the Green Grass community building and numerous topics were discussed on both days. The meeting was coordinated by Vivian High Elk and was MC’d by spiritual leader Ivan Looking Horse.

Barbara Dull Knife, Oglala Lakota, spoke about going to Rome with the Black Hills Initiative, a group who is working directly with the Vatican about revoking the Doctrine of Discovery. She said he was given a rosary that The Pope had blessed but she did not understand the meaning of it, so she gave it away to the sister of the local Episcopal Church on Pine Ridge.

Dull Knife also shared her idea of having one appointed elder from Oceti Sakowin attend treaty meetings and having that elder bring information back to their reservation. Dull Knife then spoke about the lack of foster homes on Indian reservations, resulting in many children being placed in non-Indian homes. She said after years of witnessing this problem, she started a children’s home on Pine Ridge.

Naca Harry Little Thunder then spoke about being against the Keystone XL Pipeline and expressed his wishes to speak at the next tribal council meeting about the pipeline and the negative impacts that man camps have.

Two representatives from the Blackfeet Confederacy shared issues they face on their reservation in Montana including the denial of their tribe’s treaty rights. Angelo Bull Plume, Blackfeet, explained that his tribes’ hunting rights are guaranteed in their treaty; however, whenever tribal members attempt to hunt in Glacier and Yellowstone National Parks, they are harassed by park rangers. The delegates also talked about the methamphetamine epidemic on their reservation, and how there is a lack of treatment options available for their tribal members.

Before lunch break, Floyd Hand announced that a consensus had been reached and that a treaty council for Cheyenne River was needed, as CRST did not have one already.

Melvin Garreau, Ivan Looking Horse, and Remi Bald Eagle were recognized and appointed on the treaty council for Cheyenne River.

A ceremony recognizing the headmen was performed, followed by a prayer, a prayer song, and a tokala song. People then lined up and shook their hands.

Floyd Hand spoke to the new treaty council and shared guidance of being a naca, a leader of the people. He said the three rules of being a chief are to carry a headdress, not to argue back when someone says negative things about you, and most importantly, to listen to the people.

Ivan Looking Horse then spoke about what it means to wear a war bonnet.

“One who carries that bonnet of the itancan, we have a big job. I always wanted to see the represented delegates for the Oceti Sakowin seated so that we could have a higher echelon so that these tribal councils listen to their people. I know that these two men (Garreau and Bald Eagle) are going to help me with this, organizing of the treaty council here on Cheyenne River. We’re going to look for guidance from our relatives. We cannot fail today. We cannot fail the future generations. This is a big job, a job that never ends. If the staff is going, we gotta go, regardless of the blizzard or weather,” said Looking Horse.

Harry Little Thunder, then talked about the importance of recognizing all current and living chiefs on Cheyenne River. He shared that in the past he has held meetings for bonnet wearers, but that not every naca attended.

To close the evening, distinguished elder and orator Marie Randall (Oglala) spoke to the crowd.

“At 98 years, I’ve been Lakota. I will continue to be Lakota. I’m very proud to be a mother, Lakota winyan. I was raised on timsula, berries, buffalo meat. I can continue to protect the rights of our takoja. What are we thinking? What are we doing to protect our takojas? Let’s all think something better for these children to carry on. I’m proud of all of you for all your words, thoughts. We can always work things out for our takojas. Remember they have to live on the land with the Lakota identity,” said Randall.

On the second day of the treaty meeting, Virgil Taken Alive spoke about the Standing Rock treaty council rejecting the IRA government. He also shared his thoughts about the Oceti Sakowin resistance camp.

“We were told in ceremony, at yuwipi, to stay in prayer, to be peaceful. ‘Don’t get arrested and you will win.’ But little did we know that it was all about money. It was all about money. We still stand by that. Tribal council is an extension of the white man’s government that does not represent us. The IRA does not speak for us,” said Taken Alive.

Wendell Yellow Bull (Oglala) then shared his thoughts of being a pipe carrier.

He then talked about bringing all canupas together for a prayerful gathering. But Yellow Bull said that as a Lakota man, he could not tell another tiospaye or tiwahe what to do. His idea was to have tiospayes/tiwahes agree to come together and with their canupas and nacas, as they did in the old ways and during historical events such as the signing of the 1868 Fort Laramie Treaty. 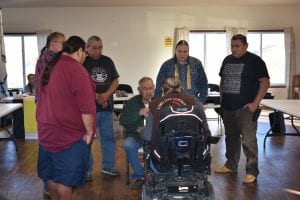 A new treaty council is formed: three representatives were appointed to the Cheyenne River Sioux Tribe Treaty Council on Saturday, October 20. They are Ivan Looking Horse, Melvin Garreau and Remi Bald Eagle. Chief Floyd Hand (sitting in electronic scooter) spoke to the three men about being nacas and working for the people.

On both days of the meeting breakfast, lunch, and dinner was served to everyone, and a prayer was spoken before the beginning of the meetings. The next treaty meeting is scheduled for Saturday, November 10, at the Green Grass Community Building. Start time is 9 a.m. and potluck meals will be provided. Everyone is invited to bring their favorite dish. For more information, contact Ivan Looking Horse at 605-407-6266.