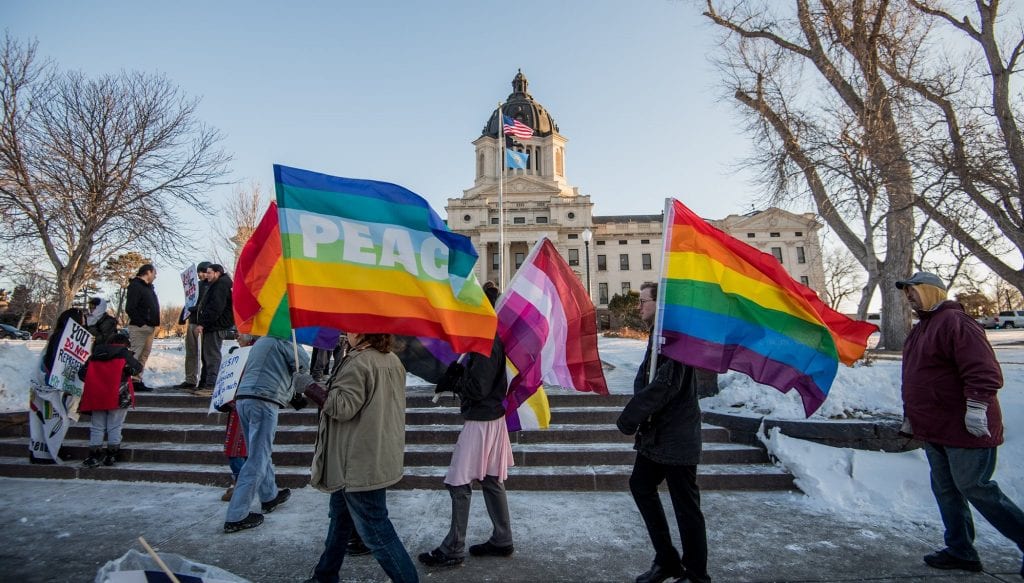 PHOTO BY ACLU OF SOUTH DAKOTA
Opponents of the “Transgender Bill” gather outside of the Capitol Building on Monday, February 10.

The bill passed the South Dakota House on January 29, causing a nationwide debate on the mental health, personal agency, and use of medical intervention to suppress puberty in transgender children under the age of 16. The debate included questions on the role of the family in making personal medical decisions and of the government in intimate medical legislation.

A motion to send the bill to the floor of the Senate with a “Do Pass” recommendation failed in committee. A motion to “Defer the Bill to the 41st Day” passed by a vote of Yeas 5 to Nays 2. A vote to Defer to the 41st Day kills the bill since there can be no more than 40 days in an annual legislative session.

The ACLU of South Dakota opposed HB1057, stating “It is unconstitutional to single out one group of people and categorically ban all care, no matter how medically necessary.”

Public opposition to the bill was visible with over 20 protestors in attendance in Pierre on Monday.

Debate in committee was deftly managed by Chair Deb Soholt, a Registered Nurse and Health Care Director. In her closing comments, Sen. Soholt summarized the debate as “phenomenally polarizing” and yet a display of love and caring for children. Citing the extraordinary debate, she highlighted dueling medical input, scientific interpretation, and religious ideology. She noted that “in the health care community, I understand that you can take scientific studies and you have to look at flaws. You have to understand where they come from. What’s the perception? How was the interpretation?”

In the end, she concluded that the bill was premature and that it is not the place for government to “leapfrog” over parental consent.

In the weeks leading up to the House vote, the sponsor, Rep. Deutsch, advocated the bill as a way for the State to protect children. He commented on NPR that, “It’s simply a pause button to help them figure out who they are at a young age without having these medical procedures done to their body, which could, potentially, be permanent.”

In contrast, Rep. Lesmeister made public comments, that in the hearings in the House, “There was a lot of misinformation about the drugs used and it was great to hear from the medical professionals who helped clear this up and provided information about what and why certain drugs are used. Another issue is the HIPPA [sic] laws — this bill would, in effect, destroy HIPPA laws and make the doctors release information to the government and start collecting information about these people — government intrusion.”

In an interview with the fundamentalist activist group, The Family Resource Council, Deutsch said his initial involvement in the issue was accidental and innocent and came from random encounters on the internet with the stories of trans youth on Twitter and Reddit.

He says he was drawn in by images of young people showing their surgical scars. “It’s terrible. That should not ever be allowed. To me that’s a crime against humanity when these procedures are done by these doctors, you know, that dance on the edge of medicine. I just don’t think it should be done.”

The Family Resource Council is categorized as an extremist hate group by the Southern Poverty Law Center and has a long history of characterizing the LGBTQ community is a threat to American society.

The interview asserts that gender dysphoria in children can be characterized as “a momentary feeling,” one will go away naturally with time in 85% of children who experience confusion about whether they are a boy or a girl. Deutsch was concerned about locking children in to a lifetime of physical and psychological problems caused by early intervention.

Michaela Seiber echoed the concerns of Sen. Soholt in her testimony before the committee. Seiber is a Sisseton Wahpeton Oyate tribal member, a University of South Dakota researcher and 2019 Bush Fellow. In addition to holding a Master’s in Public Health, Seiber is the Vice Chair and Treasurer of the Transformation Project, a South Dakota non-profit “that exists to support trans youth and young adults in our state.”

As a professional researcher, Seiber found that “the data the prime sponsor was using to justify this bill was not what he thought it was.” Instead she found “utilization of cherry-picked results, inaccurate interpretations of studies, no effort in compiling a complete anthology of research studies regarding the topic at hand.”

Seiber addressed Deutsch’s claims. “The claim that a large percentage will persist as their sex assigned at birth, if they are allowed to go through puberty, was incredibly inaccurate in the methodology behind it. These studies have been highly criticized by researchers and scientists throughout the country. Every year we have these bills presented under the cover of protection and unsupported by data and research. I’m here to tell you that the data and research utilized every year is misleading and more, mistakes that ethical scientists and researchers would not make.”

Similar legislation has been proposed in Florida, Missouri, South Carolina, Colorado and Illinois.

She asserts that the data finds that delay in the administration of puberty blockers causes irreversible physical and psychological harm to children. “The best way to treat trans kids is to actually pause puberty at the first sign of pubertal changes which gives them the true pause they need.”

Seiber stressed that, “Trans kids exceed when they are surrounded by supportive adults and communities, not exposed to the dangerous conversation that we’ve seen take place here in our state. I have five pages worth of points from these studies, all of which overwhelmingly lead toward supporting trans kids in every way we can. Which means letting them, their families, and doctors decide what’s best for them. The amendment made to this bill does not negate the violent, inaccurate rhetoric which has formed around the issue. Our kids are watching and our trans kids are scared to exist.”

A study in the journal Pediatrics this month bears this out. Entitled, “Pubertal Suppression for Transgender Youth and Risk of Suicidal Ideation,” the study shows that a very low percentage of those who wish for puberty suppressing drugs in childhood actually receive then, as little as 2.5%. Those who received the treatment had lower odds of lifetime suicidal ideation than those who did not receive the treatment. The study concludes that, “these results align with past literature, suggesting that pubertal suppression for transgender adolescents who want this treatment is associated with favorable mental health outcomes.”

Deutsch has been interested in this issue since at least last fall when he traveled to Washington, DC for a summit at the conservative think tank Heritage Foundation. According to NPR, while there Deutsch handed out drafts of the bill to lawmakers from other states. Initial drafts of the bill included felony criminal penalties for physicians. The draft passed in the House reduced those penalties to civil charges.

In the interview with the Family Resource Center Deutsch went on to compare the scarring of trans youth to Holocaust atrocities.

“I’m the son of a holocaust survivor. I’ve had family members killed in Auschwitz, and I’ve seen the pictures of the bizarre medical experiments. I don’t want that to happen to our kids. And that’s what’s going on right now,” he said.

Senators Jensen and Russell were proponents of the bill in the Health and Human Services committee hearing. Jensen admonished the committee to allow trans children to push the pause button in order to allow their bodies the necessary time to grow through puberty.

Russell asserts that the bill is “not paternalistic on the part of the government.” He believes advocacy for medical treatment for transgender people is “activist and ideologically-driven in the medical community…The ideology from the Obama administration in 2014 has put this in place for us to decide today. We can say this was not ideologically driven, but it was.”