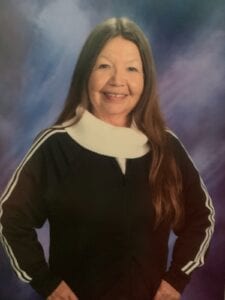 Toni Rae Lee was born on May 1, 1950 to Harold “Peaches” and Velma (Walters) Lee at Cheyenne River Agency, SD.  After graduating from Cheyenne-Eagle Butte High School in 1968, Toni Rae attended Clerical School in Dallas, Texas.  She met her husband, Steven Peshlakai there and a son, Shannon was born to this union.  Toni also attended Fort Lewis College in Durango, Colorado and her second son, Nathan “Cricket” Bison was born there.  She lived in Norman, Oklahoma for a short time and her youngest son, Dakota “Cody” Lee was born there.  Toni loved Albuquerque, NM and lived there most of her life.

Toni was affectionately known as “Sis” by people who knew her all her life.  She was named after her Uncle Raymond Walters.  Toni Rae moved to Rapid City, SD then to Eagle Butte to spend more time with her Mother.  She was employed as a Dialysis Aide while residing in Eagle Butte.  One year there was a blizzard on May 1st, her birthday.  Toni Rae couldn’t deal with the cold and snow so she returned to Albuquerque where she resided until her death.

Toni Rae was well-known for her sewing skills.  She made countless star quilts, pillows, dolls, horses, wall hangings, clothes, etc.  She was a member of an Indigenous Womens Artists Cooperative in Albuquerque which promoted and showcased their crafts and artistry in the area.

On March 16, 2020 our dear Sister, Mother, Grandmother, Friend and Relative suffered a medical emergency and remained unresponsive until her death on June 4, 2020.