To Walk In Beauty: The Gormans visit South Dakota 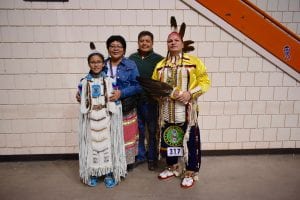 Snowstorm, whiteout conditions, and freezing temperatures did not stop an Arizona couple from visiting their family in South Dakota. Driving over a thousand miles, Marlene and Harrison Gorman of Round Rock, Arizona were determined to make it to Eagle Butte for their one-week vacation stay. They began their journey on Wednesday afternoon, Oct. 9 and they made impressive headway, reaching Cheyenne before midnight. Snow began to fall that night, and by early morning, a winter warning was in effect. Motivated to reach Eagle Butte by nightfall, the couple hit the road and began their drive to South Dakota.

With careful driving, Marlene and Harrison made their way through Lusk, eventually arriving at the state line of South Dakota, where they stopped to take a photo with a sign welcoming them.

50 mph winds began to blow, resulting in whiteout conditions. Nightfall came, and road conditions worsened until a sleet of black ice covered the entire road. After driving over 1,000 miles, Marlene and Harrison had no choice but to stop for the night in Faith, just 40-something miles short of their destination.

Finding rest, warmth and safety was the perfect prescription to the storm.

The next day, Mother Nature calmed down, allowing for what seemed to be a short drive; however, news reached the Gormans that a semi-truck was blocking the road in Lantry, and traffic was at a standstill.

They decided to wait a few hours, but the anticipation and excitement of seeing their family was too much, and they decided to chance the road and began their drive east on Highway 212. Luck was on their side, and by the time they reached Lantry, the semi-truck was gone and traffic was flowing just fine.

Within 20 minutes, the Gormans had finally reached the Beautiful Bald Eagle home, where they were reunited with their family: Remi, Alaina, Hope, Thurman, Clover and the cats!

I cannot tell you enough how dreadful it was for me to worry about my folks during their journey here. Had they left a day earlier, they probably would have missed the entire storm, but that was not how my mother’s leave was approved, which was in place for almost two months.

My mother and Harrison worked hard to raise money for their trip, spending long hours making ribbon skirts and crafts; while Harrison, who had back pain, took up his chainsaw and ax to make firewood, selling to the highest bidder, all to fund their trip. My folks literally did everything in their power to visit us.

Why? It is simple — because they love us. And we love them.

Their adventure and story started long before they left Arizona. They are an adventurous couple, always traveling and meeting new people. During their stay, we attended Black Hills Powwow, where my husband and daughter danced. My mother stood with pride each time they danced, and she shed tears watching their footsteps and moves- it was the first time she saw them dancing.

They also met actor Michael Spears, who my mom most remembered as the boy who fell off his horse in Dances With Wolves. Mom and Harrison were so delighted to shake his hand and take a photo with him.

Their visit here has been a fun one, and was a much needed break from all life’s craziness and busy schedules. It is wonderful to know that thousands of miles and winter storms cannot stop love and family.

Chairman Frazier’s statement on Federal Court ruling against DAPLChairman Frazier: Mount Rushmore, the faces of our molestersMatter: A poem by Dr. Robert A. Ryan