To Walk In Beauty: Happy New Year: A Navajo perspective and greeting 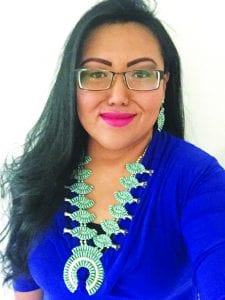 Today is the first of October, and to the Navajo people, it is a special time of the year. In the Navajo language, October is called “Gháájí”, which translates to “back-to-back”. Our traditional stories say that this is the time when the seasons interact with one another, often resulting in rapid changes in temperature from warm to cool, and vice versa.

In the Southwest, it is also the time for harvesting and preservation of food that will see us through the winter. Although people may think of Arizona as a dry desert with consistently searing temperatures, we do get cold and icy winters, albeit, not as harsh or as long as the winters here.

It is not an uncommon sight to see snow, especially in northern Arizona, where the Navajo people live. As a matter of fact, on September 23, during the fall solstice, snow fell on one of our sacred mountains, an important cultural sign for the people to begin preparations for beautiful winter ceremonies.

Another important event during the fall is “keesh’je”, which is a social gathering and a time to share stories about The Emergennce and the time when Old Ones battled for day and night. Keesh’je is a game, similar to hand games, where a ball is hidden in moccasins that are buried in the ground. Two teams each take turn guessing which moccasin has the ball hidden in it, and scores are kept with yucca stems.

Being from Arizona, I absolutely love warm weather and dread colder temperatures; however, October 1st is a beautiful reminder that the seasons are changing, as was carefully planned and implemented long ago by our deities, the Holy People.

As this month begins, it is a time to celebrate renewal, perseverance and is a chance to pass our stories down to our children. What stories do you have about this time of year? I would love to hear them!

In the tradition of my people, I greet you, “Yá’át’ééh Gháájí’”- Happy Navajo New Year! May this new year be filled with blessings, healing and prosperity. Hózhó nahasdlíí, in beauty it is complete.

Chairman Frazier’s statement on Federal Court ruling against DAPLChairman Frazier: Mount Rushmore, the faces of our molestersMatter: A poem by Dr. Robert A. Ryan