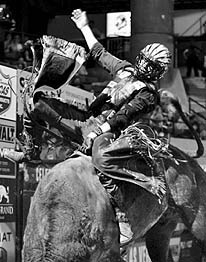 Stetson Lawrence lives in North Dakota, he is my cousin, and he is in the PBR. He is ranked 16 in the world. He has been in the PBR for 12 years. Stetson has 1233.33 world points.

Stetson also has 35 or more qualified rides. He is Native American. His name in native is Fire Walker. His latest injury was in 2018, it was a neck injury by getting hung up and thrown around. He made a new team for the PBR world cup. His riding song is Electric Pow Wow by A Tribe Named Red. In 2014 he was in a bullarama and on his first bull, he scored 86, and his second ride he scored 84.5. His latest ride was an 87-point ride.

Blue heelers weigh up to 35-45 pounds. Blue heelers are gray, white, and sometimes red. They are very loyal to their families. Blue healers are also not afraid to get aggressive.

Blue heelers are a herding dog. They originally came from Australia. They are decedents from dingoes.

They are very active and loving. Blue heelers are known for their intelligence and energy. They are the 10th smartest dogs on the list. Their life span is from 12-16 years old.

The purpose of the border collie was to gather and control sheep in the hilly border country between Scotland and England. They’re known for their intense stare, or “eye”, with which controls their flock. He’s a dog with lots of energy, stamina, and working drive, all of which make him a great herding dog. He’s still used today to herd sheep and cattle on ranches and farms. The highly trainable and smart border collie also does great in many canine sports, including obedience, fly ball, agility, tracking, and flying disc competitions. The Border Collies Dog Breed Group is the Herding Group. The dogs’ height is 1 foot,6 inches to 1 foot, 10 inches tall. They weigh 30 to 45 pounds. The dogs’ lifespan is 12 to 15 years.

Here are some things dogs do. Not all dogs do the same thing so it depends on the type of dog you have. All the stuff I’m about to type is going to be about random breeds of dogs. One thing some dogs do is hunt. Some things they hunt include rabbits, pheasants, and other game. Another thing some dogs do is play fetch, if they don’t run after the toy you probably have to teach them how to play. Not all dogs like children, like the dalmatian. Most dogs have a certain size, some dogs are small and some are big, for example. The chihuahua is one of the breeds that are born small and stay small. The dog that grows bigger than other dogs is the German shepherd. This is some things about dogs.

Payton Routier is a trick rider, she lives in Buffalo, South Dakota. Peyton started trick riding when she was 4 years old and she even trained her own horses!

She attended a trick riding clinic put on by Roz Beaton. Her mother said, “People say she’s fearless, but she is not. When she first started she was crying because she wanted to be better than she ever was, but then finally a famous trick rider convinced her that she has to start slow, then faster, and then at a gallop.”

They were struggling to find a trick riding saddle for her. They were going to make one for her but they didn’t want to spend that kind of money because they didn’t know if she wanted to keep on trick riding. Her mom said, “It’s something she loves.” Now, when she performs, she carries the American flag during the national anthem while standing on her horse. She has trick rode at Bowman, ND, Sturgis and Onida.

Payton is now 11 years old and is still pursuing her dream.

When you ranch you have to be strong and be willing to get up in the middle of the night or drop everything you’re doing to chase cattle. You have to know how to run or have a hired worker that knows how to run a chute. Many ranchers A.I.

If you have a horse it would come in handy at a ranch.Ranching is a lot of hard work. You can’t go on many vacations because you always have work and you’ll be behind. If you go on a vacation you have to be ready to work your butt off when you get back. You can’t guarantee how much money you will earn, it all depends on if it rains, when it rains, and how much people want to pay for your cattle.

You have to have a bunch of land. You need a bunch of land for pastures, pens, fields, sheds for your trucks and tractors, barns, etc. If you have a lot of cattle or customers, you will get more money. You should have fields to get grain and hay instead of buying all of it. If you have fields then you will need tractors, a windrower, a baler, a payloader, a flatbed and pickup or semi, a rake optional, and a hay lot for hay. For grain you can have a silage chopper, a combine, a grain trailer, a feed wagon, or you can hire someone to do it.

You should ranch if you don’t like to sit around and do nothing. If you ranch it doesn’t only help you it helps your kids because they have more room to play. If you want a dog, a ranch would be a perfect spot they can hunt, play, roam and your kids can play with it too.

The X Games is basically a tournament with dirt bikes, bikes, skateboards, and much more. I think the one who has the most points in their category wins. That’s pretty much what the X Games are.

The 2019 X Games arrived in Minneapolis on August 1st through August 4th. On the first day, in the SoFi Moto X Step Up category, in first place was Jarryd McNeil with a gold medal. In second was Bryce Hudson with a silver medal.

Now it looks like there are two third place winners: Colby Raha, and Ronnie Renner both won a bronze medal. Then on the second day, for the Monster Energy Men’s Skateboard Street Elimination bracket, in the final, Yuto Horigome came in with a best of 89.00 points. Then it was Nyjah Huston with a best of 88.00 points. Next was Sora Shirai with a best of 87.00 points. Then on the third day, in the Moto X Best Whip category, Tyler Bereman came in first with a gold medal. Next up was Tom Parsons with a silver medal. In third place was Jarryd McNeil with a bronze medal.

“Thompson for threeeee!” Bang! Klay Thompson from way downtown! Let me tell you my story. I grew up in Ladera Ranch, California. My parents were a big factor in my life. My dad is Mychal Thompson and my mom is Julie Thompson. My dad always told me that it’s up to me how good I wanted to be.

It was my sophomore year when I started thinking about college basketball. My senior year was finally here and I was the 53rd best player in the country. I had five offers to play college basketball, with Washington State, Nevada, Vanderbilt, Colorado, and Michigan. When it came to my signing day, it was a tough decision, but I decided to go to Washington State. There, I had a successful career. My college career numbers were 17.9 points per game and 2.6 assists per game. I decided to declare for the 2011 NBA draft.

I was sitting at the table we were assigned to sit at when the phone rang. I answered it, “Hello.”

“Hi, Klay. We have been watching you for a while. I think we are very interested in drafting you with the 11th pick we have.”

It was Steve Kerr, the Golden State Warriors head coach. “Yeah, of c-c-course. Thank you so much,” I said. “Yeah, you’re very welcome.”

When I got up I gave a hug to my dad, I said, “We made it, Dad” and he said, “No, you made it”. I was so excited because I already knew the Warriors had a rising star, Stephen Curry. I was walking up on the stage- that was probably the best feeling I’ve ever felt.

Now, I’ve been in the NBA for nine years. I’ve averaged over 19 points per game in my career. I’ve won three championships, along with one of my best friends, Stephen Curry who also won 3 champions. We are considered the Splash Bros.

The first college football game was played by Rutgers and Princeton. However, it wasn’t until 1880s that a great rugby player, Walter Camp, pioneered rule changes that slowly transformed rugby into football. Walter Camp is known as father of American football. He made line of scrimmage, down and distance, and blocking rules. In the late 19th and early 20th Centuries, gameplay developments by college coaches such as Eddie Cochmes, Amos Alonzo Stagg, Parke H, Davis Knute Rockne, and Glenn Pop helped take advantage of the newly introduced pass.

Miranda Lambert was born in Longview, TX on November 10th, in 1983. She married Blake Shelton first then they got divorced in 2015. She is currently married to Brendan McLoughlin, they got married in Boerne, TX.

Her father was also a great guitarist and songwriter. So basically, the talent runs in the family. She placed third in the tv show Nashville Star, but the truth is that she didn’t want to win in the first place.

Her biggest idol is Mariah Carey. She started her own band when she was 17, her band was called Texas Pride. In 2004, she released the song, “Me and Charlie Talking.” She is now 35 years old and she is still pursuing her dream.

What did the traffic stop say to the car?

Don’t look I’m about to change.

Why do seagulls fly over the sea?

Because if they flew over the bay they’d be called a baygull (bagel).

What is a witch’s favorite subject in school?

Why do we tell actors to break a leg?

Because every play has a cast.

Why did the kid cross the playgroung?

To get to the other slide.

Why won’t the dog listen to the sheep’s jokes?

He’s herd them all.

What do you get if you cross an angry sheep and a moody cow?

An animal in a baaaad mooood.

My boss told me to have a good day so…I went home.

What do you call a sleeping cow?