Class 9A playsoffs enter the third round this week, with Timber Lake advancing to the semifinals against Canistota/Freeman Thursday, 5:30 p.m.

The Panthers took homefield advantage and dominated the game against the New Underwood Tigers who defeated the Lemmon/McIntosh team the week before in the first round 44-0.

Despite that win, Panthers were favored to win based on their 8-0 season versus New Underwood’s 5-3 season.

The Panthers did not let their winning season get the best of their minds, and showed a laser-like focus on scoring or stopping the ball.

Senior and SDSU recruit Tucker Kraft, Freshman Hank Kraft, Senior Jackson Harrison, and Senior Kuper Heck were all instrumental in the game, but the whole team showed a passion for the win that New Underwood could not top.

Timber Lake was able to shut down the New Underwood offense repeatedly, and took advantage of several interceptions. New Underwood scooped up the ball on a fumble in the second half, but couldn’t capitalize on the opportunity. 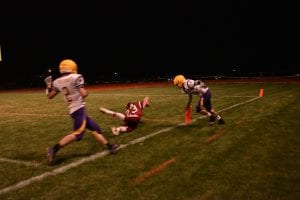 Senior Jackson Harrison dives for a TD, but stepped out of bounds on his leap to the end zone, giving the Panthers first and goal. 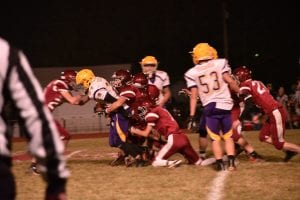 The TImber Lake defense proved a formidable opponent, but the New Underwood Tigers refused to go down quietly. Photos by Jody Rust 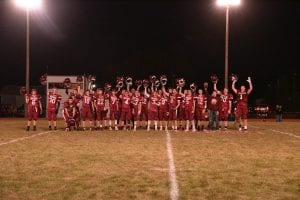 The Timber Lake Panthers lined the field for a team victory photo. They play Canistota/Freeman on Thursday at 5:30 p.m. MT in Timber Lake. Photo by Jody Rust

Canistota/Freeman enters the semifinals with one seasonal loss against 9AA Garreston, and the match-up should prove worthy of a trip to Timber Lake.