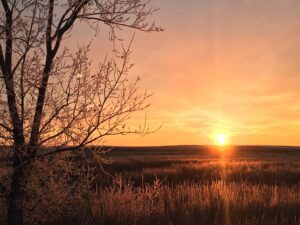 This morning was something. A little snow

lay on the ground. The sun floated in a clear

blue sky. The sea was blue, and blue-green,

as far as the eye could see.

Scarcely a ripple. Calm. I dressed and went

for a walk — determined not to return

until I took in what Nature had to offer.

I passed close to some old, bent-over trees.

Crossed a field strewn with rocks

where snow had drifted. Kept going

until I reached the bluff.

Where I gazed at the sea, and the sky, and

the gulls wheeling over the white beach

far below. All lovely. All bathed in a pure

cold light. But, as usual, my thoughts

began to wander. I had to will

myself to see what I was seeing

and nothing else. I had to tell myself this is what

mattered, not the other. (And I did see it,

it crowded out the usual musings on

what was right, and what was wrong — duty,

tender memories, thoughts of death, how I should treat

with my former wife. All the things

I hoped would go away this morning.

The stuff I live with every day. What

I’ve trampled on in order to stay alive.

But for a minute or two I did forget

myself and everything else. I know I did.

For when I turned back i didn’t know

where I was. Until some birds rose up

from the gnarled trees. And flew

in the direction I needed to be going.

Our New Year’s poet, Raymond Carver (American, 1938-1988) was short story writer and poet from Yakima, Washington. He attended Chico State University and graduated from Humboldt State College in California before returning home to work as a janitor, farm worker and delivery man. Carver never expected to make a living as a writer and was shocked by his success. He was accustomed to hard physical labor and the desperation of ordinary life.

“This Morning” paints a picture of a visit to a bluff overlooking the sea that could just as easily be looking out over the rippling South Dakota prairie at dawn on New Year’s Day. The calm. The bent-over trees. The drifted snow. All bathed in pure cold light. A moment of forgetting oneself and everything else.

According to literary critic Edna Longley, “A Carver poem instantly establishes its presence.” “This Morning” creates a sense of place outside of time where the poet reflects on how Nature points the way forward.

His writing deals “…with the collapse of human relationships. Some of his stories take place at the moment things fall apart; others, after the damage has been done, while the shock waves still reverberate. Alcohol and violence are rarely far removed from what happens,” said Newsweek’s Peter S. Prescott.

Carver was a hard-drinking alcoholic who married painfully young and lived off the earnings of his first wife, Maryann Burk Carver, for most of their life together. “This Morning” was written in 1986, ten years after his first real success, nine years into Carver’s sobriety, and eight years into his relationship with his second wife, poet Tess Gallagher.

A beautiful animated poem painting of “This Morning” read by Alessio Morglia and illustrated and animated by Alessandro Ferraro can be found at www.midorisnyder.com/the_labyrinth/2018/07/raymond-carver-this-morning.html.