The Warrior Tradition: a film about Native American veterans

SCREENSHOT FROM THE FILM, THE WARRIOR TRADITION
U.S. Marine Corps veteran Dewey Bad Warrior is featured in the new film, “The Warrior Tradition”, which debuted earlier this month. The Vietnam veteran talks about his upbringing on Cheyenne River and how his grandfather prepared him for life as akicita. Bad Warrior is one of several familiar faces in the film, which shows clips from powwows that have taken place on CRST.

The documentary features first-hand interviews from veterans who come from various tribes and have different cultural teachings and views about what it means to be a warrior.

The film invokes the question about why the American Indian would join the same military that killed Indian people, and throughout the film, veterans provide answers through their cultural teachings and spiritual beliefs.

“We lost our land once, we are not going to lose it a second time. It’s still our land,” said U.S. Army veteran Lanny Asepermy (Comanche and Kiowa).

Northwestern University Professor of Journalism Patty Loew, who is of the Bad River Band of Lake Superior Ojibwe, shared what one veteran told her:

“He said that his people had signed a peace and friendship treaty with the U.S. government promising to protect the nation, should it ever need its services. He said, ‘Even though the United States broke every treaty it ever negotiated, I’m still obligating my end of the treaty.’”

With many tribal nations forced onto reservations, the late 1800’s saw the rapid decline of traditional warrior ways.

However, at the start of World War I, Native American men voluntarily enlisted in large amounts, which was unexpected, as wounds from the Indian wars were still fresh. However, Loew points out, that in that time of history, the Indian boarding schools which thousands of Native American children were forced into, were largely militarized. Children were transformed with drills, uniforms, early morning wake ups, and constant marching.

“Men like my grandfather were primed to enter and enlist in World War I,” said Loew.

Although they were not recognized as U.S. citizens, 15,000-20,000 Native American men served in the first World War, and their service inspired the U.S. government to confer citizenship.

“The enemy in the Pacific was breaking every military code that was being used by the Army, Navy, Marines and Air Force. There was no way to communicate without the enemy knowing what you’re going to do, or where you’re going to be, what hour, and location…So they were looking for a code, and they sought Navajo language,” said Navajo Code Talker Peter MacDonald.

The elderly Code Talker shared his boarding school experience, recalling the many times he was forbidden to speak his language. If caught speaking Navajo, a bar of soap would be forced into his mouth until he spat or vomited.

“Now somehow, they discovered that maybe, Navajo language would save the war in the Pacific. And it did!” said MacDonald.

“You don’t really have to sell the military because they already want to be a part of it. There is already a strong lineage of Native Americans,” said Muscogee Creek Army veteran Leslie Montemayor.

Montemayor also said that American Indians join the military out of pride and not financial necessity. “Sometimes it may give a resource out of poverty, but it is not a complete solution in itself,” she said.

The opportunity to start a new chapter in life, a chance to get out of the reservation, and a way to secure a job to provide for family were some other reasons why some of the veterans enlisted.

U.S. Marine Corps veteran and Cheyenne River Sioux Tribal member, Dewey Bad Warrior, is also featured in the film. In his interview, he talks about his upbringing and his early days living with his grandparents.

He said one day his lala (grandfather) called him over and asked him to sit with him and talk, but no words were spoken for about an hour, said Bad Warrior.

“After a while, I could hear the birds singing out there. He never once said one word. I was able to learn patience through that,” he said.

His grandfather’s lesson taught him patience, which turned out to be a vital skill to have during ambush operations in Vietnam. “That’s how I learned silence is power,” said Bad Warrior.

The film also highlights the diverse spiritual teachings from different tribes, including protection prayers and ceremonies. Some of the veterans said they carried with them eagle or hawk feathers, while some carried the prayers of their medicine people with them.

Another important topic discussed was trauma and the emotional and spiritual battles the veterans have after returning home from war. Knowing to ask for help and turning to ceremonies and traditions is part of being a warrior, said one veteran.

Other challenges post-enlistment included perspectives from female veterans who talked about having to work twice as hard as their male counter parts in order to prove their worth. Some said when they returned home, they were not welcomed to stand side-by-side with their fellow male veterans; rather, they were offered separate veterans organizations for women.

The length of the film is just under one hour, and each minute is gripping with stories of veterans who served in different military eras. Each story is unique, but have a common theme- the Native American warrior tradition is still alive.

Mainstream America can learn a lot about the way Native American people “prepare their soldiers for service, understanding that there is a spiritual component for war,” said Loew.

A special screening took place on November 2 in Rapid City, with a panel discussion after the screening. Dewey Bad Warrior was one of the five panel members who shared their military experience with audience members.

The film debuted November 11 on South Dakota Public Broadcasting and has received great reviews. The entire film can be viewed for free at www.PBS.org. 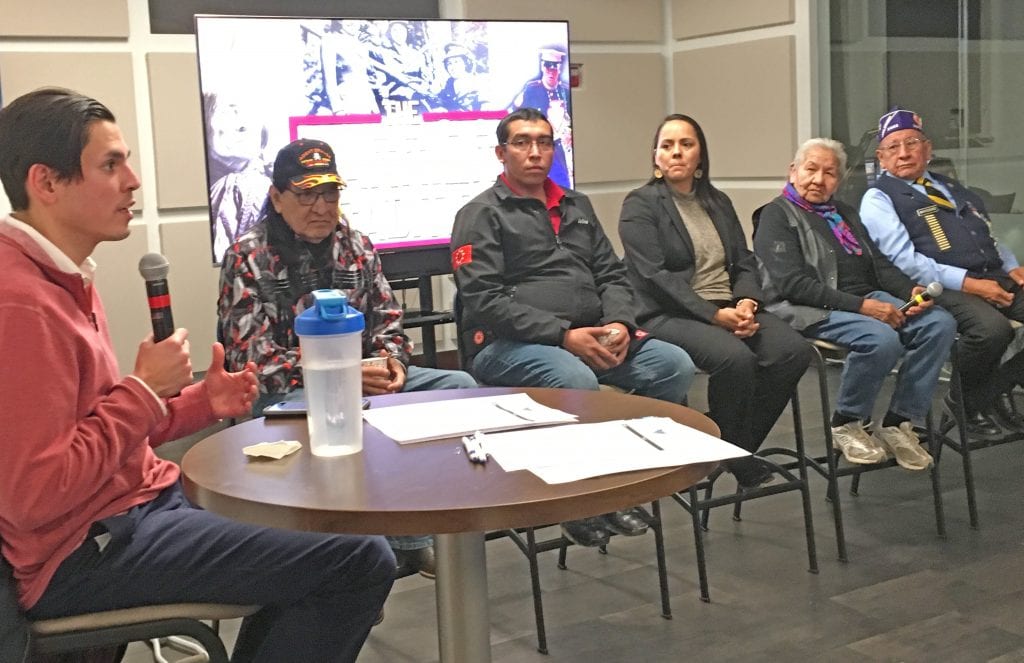 PHOTO FROM KATY BEAM
At the November 3 screening of “The Warrior Way”, a panel of veterans gave insight into what it means to be a Native American veteran. Panel members were Dewey Bad Warrior, Julian Bear Runner, Julian Spotted Bear, Regina Brave, and Francis White Bird.