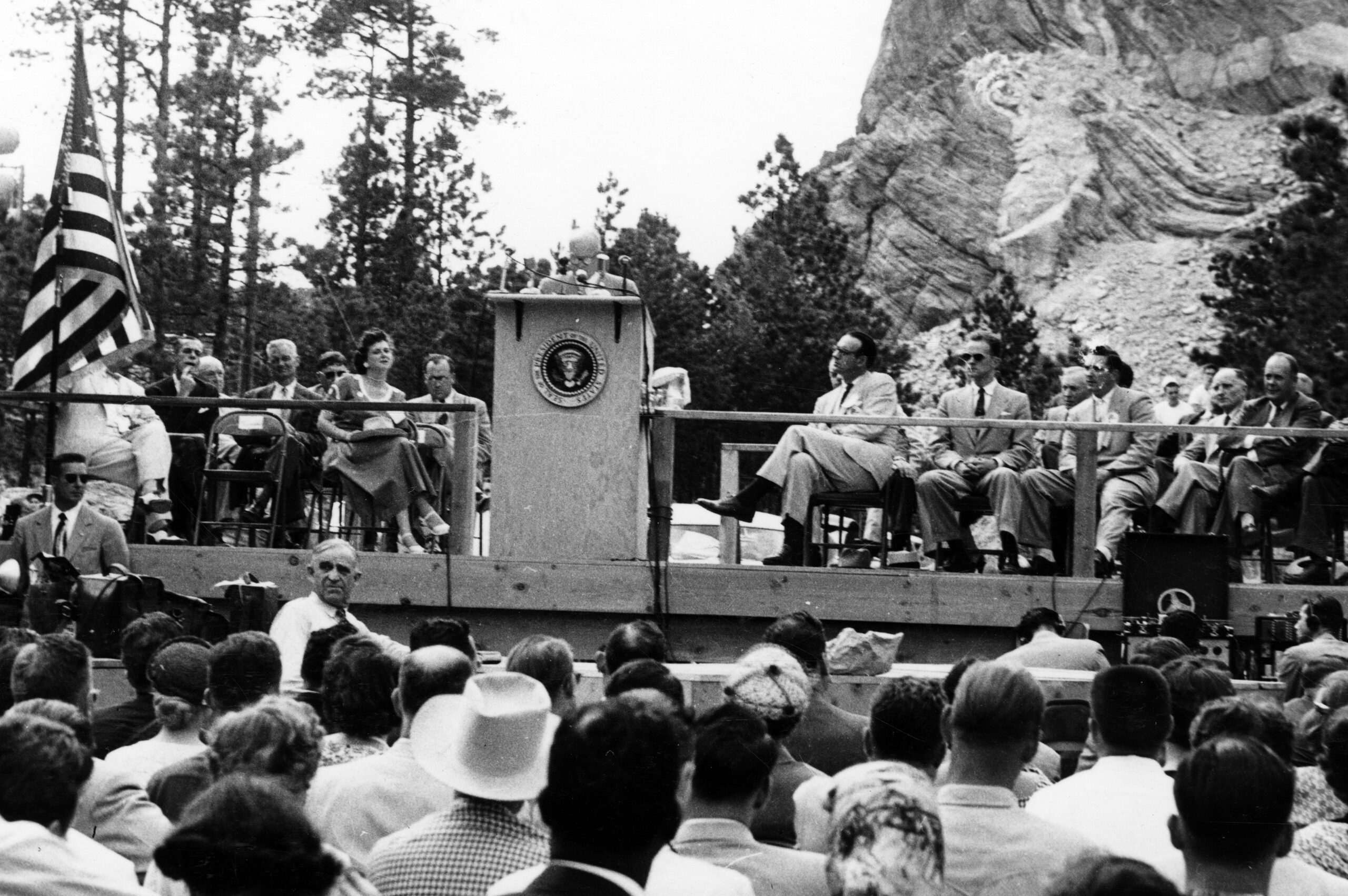 President Donald Trump has said he plans to attend the Independence Day fireworks show at Mount Rushmore National Memorial on July 3. The president’s visit would make him the eighth sitting United States president to see the Shrine of Democracy.

President Calvin Coolidge and his wife, Grace, spent most of the summer of 1927 in the Black Hills. President Coolidge drew national attention to Mount Rushmore when he spoke at formal dedication ceremonies on Aug. 10, 1927.

“We have come here to dedicate a cornerstone that was laid by the hand of the Almighty,” Coolidge told more than 1,000 people who attended. “The people of the future will see history and art combined to portray the spirit of patriotism. This memorial will be another national shrine to which future generations will repair to declare their continuing allegiance to independence, to self government, to freedom and to economic justice.”

Most important to Rushmore backers, Coolidge pledged federal support for the project. The President gave sculptor Gutzon Borglum a set of drills. Borglum was lowered over the granite cliff and drilled six small holes that would signal the start of work on the mountain.

The idea for a huge memorial in the Black Hills originated with  South Dakota State Historian Doane Robinson. He envisioned carving American West figures such as Buffalo Bill Cody into the granite spires known as the Needles as a way to draw tourists to the area. In 1924, Robinson wrote Borglum and asked if it would be possible for the sculptor to design and supervise carving a “massive sculpture” in the Black Hills. Borglum expanded Robinson’s vision from western to national heroes and selected a massive outcropping of granite named Mount Rushmore for the carving. Borglum chose to carve Presidents George Washington, Thomas Jefferson, Abraham Lincoln and Theodore Roosevelt to symbolize the birth, growth, preservation and development of the United States.

Robinson’s letter to Borglum  and Borglum’s reply are found on the South Dakota Digital Archives. They can be found at sddigitalarchives.contentdm.oclc.org/digital/collection/manuscript/id/454/rec/5

Robinson’s letter and Borglum’s telegram are on pages 13 and 14.

The next president to visit Mount Rushmore after Coolidge was Franklin D. Roosevelt on Aug. 30, 1936, when he stopped during a campaign swing to attend the dedication of the Jefferson figure.

Although Roosevelt hadn’t planned to speak, Borglum proposed a challenge (quoted in “The Four Faces of Freedom”) that the president decided he could not refuse: “I want you, Mr. President, to dedicate this memorial as a shrine to democracy, to call upon the people of this earth for one hundred thousand years to come, to read the thought and to see what manner of men struggled here to establish self-determining government in the western world.”

Roosevelt told the crowd, “I had seen the drawings and I had talked with those who are responsible for this great work, and yet I had no conception until about 10 minutes ago, not only of its magnitude but of its permanent beauty and of its permanent importance.”

After speculating about what Americans thousands of years later would think when they gazed upon the faces carved on Mount Rushmore, Roosevelt said, “Let us hope that at least they will give us the benefit of the doubt – that they will believe we have honestly striven every day and generation to preserve a decent land to live in and decent form of government to operate under.”

President Dwight D. Eisenhower had Mount Rushmore as a backdrop when he addressed delegates to the Young Republican National Federation on June 11, 1953.

“And let us always, even as we rightly revere the past and its heritage of freedom, never fear or doubt the future. For this, the future, is the hope and the home of all who are young and are free – if they are but brave,” the president told his audience.

President Ronald Reagan had a bird’s-eye view of Mount Rushmore en route to Rapid City on Oct. 29, 1986. Air Force One flew over the great stone faces twice so the nation’s chief executive could see them. The sight inspired the president to read a short poem to his aides, according to an article by Harold Schuler in the Winter 2000 issue of “South Dakota History,” the quarterly publication of the South Dakota State Historical Society.

President George H.W. Bush was the speaker at the dedication ceremony on July 3, 1991, that marked the monument’s golden anniversary.

“On the eve of this Fourth of July – and the 50th anniversary of this monument – let us express our undiminished devotion to the ideals of Washington, Jefferson, Lincoln and Roosevelt, ideals as towering and solid as the monument that honors them,” he said.

Of the approximately 3,500 people attending  the event, 16 were men who helped build the monument. President Bush thanked the men for their work, and then, according to Schuler, he turned to the crowd and said, “And to all of you, thank you for the privilege of helping dedicate a memorial that once moved a visitor to say, ‘A visit to Mount Rushmore is a moment of communion with the very soul of America.’”

President Bill Clinton surprised visitors to Mount Rushmore when he arrived in time for the evening program on July 6, 1999. The president visited Pine Ridge Reservation the next day as part of a four-day tour of poverty-stricken areas in the country. 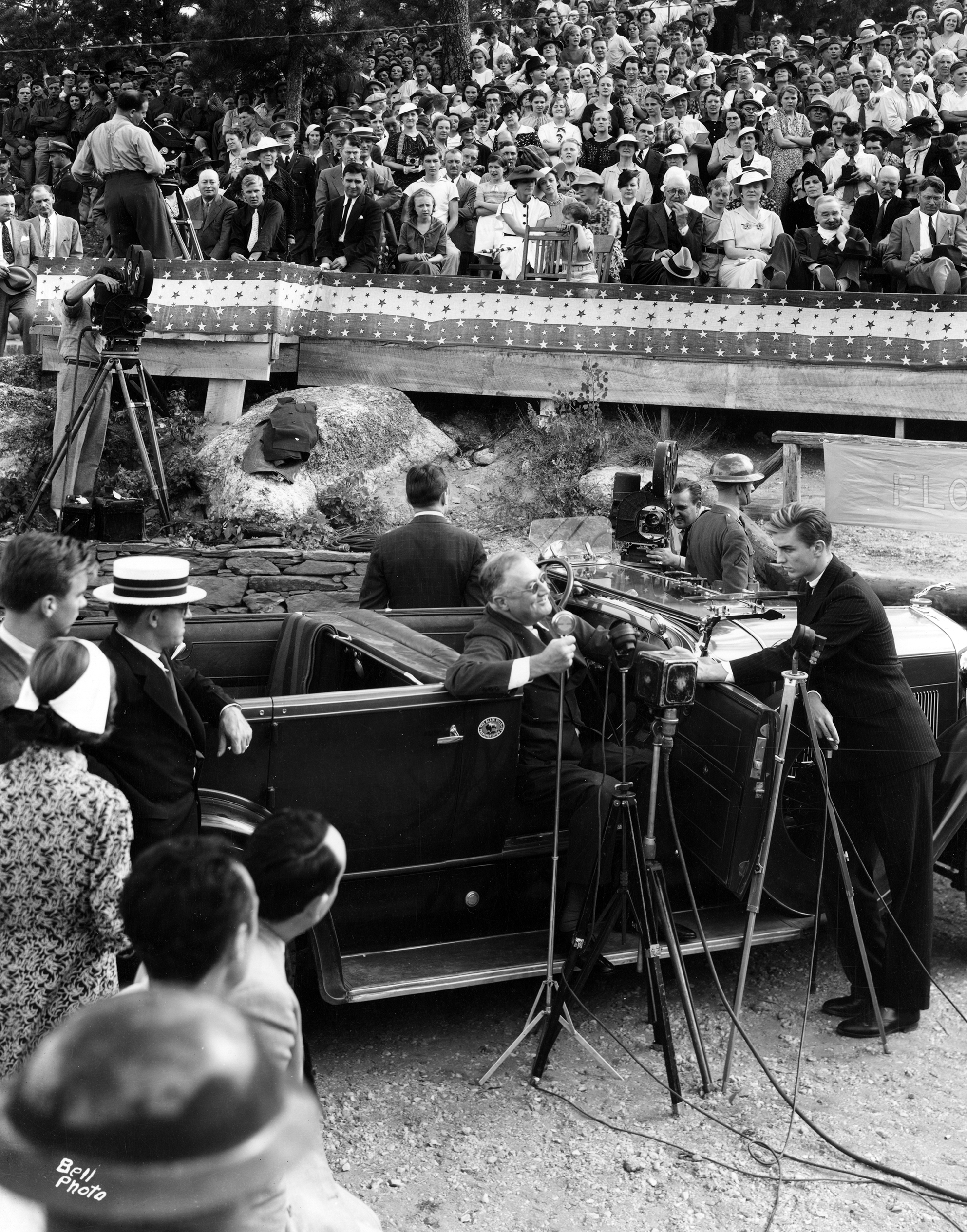