John B. Wilson and his wife Ginger M. bought their new Tesla in January. John, a retired computer technician and proud “data junkie”, planned the long-range trip in his first ever all-electric car back in June.

While he and his wife had traveled all over St. Louis, and down to the Cascades in MO, they had yet to take it on a long road trip.

Tesla electric vehicle drivers can’t take chargers with them, but they can find a map of the chargers available on the highways and byways of America.

The pre-planned trip took John and Ginger up to Milwaukee first, with stops in Normal, IL and Rockford before they arrived and stayed the night in Milwaukee.

For their first charging stop in Normal, they received a tip from a fellow Tesla owner that while the charger address may be accurate, once at the address, finding the charging station is not always easy.

John and Ginger had to drive their Tesla into a paid parking garage and go to the third floor to charge the vehicle. They stayed for 50 minutes, grabbing something to eat, then when trying to get the parking ticket validated, learned that they would not need to worry about that since the parking garage did not charge people for the first hour.

Since the Wilson’s six months of free charging passed, this trip required the couple to pay for their charges — which means they have to pay for the kilowatts they use or the time it takes them to charge the vehicle to a certain level.

Some charging stations charge by the minute. In Oacoma, SD, the charging stations charge .11 cents to .22 cents per minute, with idling costing $1.00 a minute. When the Wilson’s charged up in LaCross, WI, they paid $2.88 for 100 miles of battery life after 10 minutes of charging. LaCross is the one place where the couple experienced a reality check — adding to the adventure as John characterized it. After the car had been charging for 10 minutes, the electricity in the area turned off. The traffic lights were not working and while the couple tried another charging station, it did not work and they assumed none of the other 7 stations worked either.

John said this was a scenario he had not thought of — the electricity going out and the couple being stuck with too low a charge to get to the next station. Fortunately, they had a total charge of 188 miles, 88 of which they still had before reaching LaCross, and it was only 140 miles to the next charging station in Albert Lee.

They visited the local Applebee’s restaurant while the Tesla charged.

From Albert Lee, the couple traveled to Worthington, with 148 miles left on the charge, spent $5.29 to charge the vehicle up to 256 miles so they would have enough to make it to Mitchell, SD, where they drove around the town, and stopped for dinner before parking the Tesla at the charging station which was located across from their hotel.

To give perspective, a recent trip I took in a 2010 Dodge Caravan cost me $65.00 to travel 600 miles, so the Tesla electric charging costs half what it would cost in a gas-fed, combustion engine vehicle.

The only scare was the electrical outage at LaCross. John said he would love to replace his Pontiac Solstice, a two-seater, combustion engine convertible with another Tesla once the Solstice no longer runs well, but Ginger pointed out that power outages could leave them stranded, and John admitted that St. Louis is no stranger to prolonged outages.

The couple decided it best to keep one combustion engine and the Tesla, but that does not change John’s enthusiasm for the vehicle and all of its capabilities.

He proudly took me on a tour of how to get into it, how to access the music, open compartments, access GPS and locate available charging stations.

People don’t leave the house with only 15 percent on the battery of their phones without carrying a charger with them — at least not intentionally. John said the same is true for the Tesla — you just do not leave the home without ensuring you have enough charge to get to and from the destination or to at least get to the next charging station.

Tesla’s Model 3 is designed to require responsible driving. While it has autopilot, the autopilot will not work if the driver’s hands are not on the wheel.

John said the car will “yell at you” twice, and then it will shut off. You will have to get out of the car and reset the destination before it will turn back on.

When you go to close a compartment, like the glove compartment, if you slam it, it will not shut, and the car will notify you on the central control screen to shut it gently.

Most modern vehicles have some level of automation, with cruise control being the lowest level, John said. The Tesla is the cream of the crop it seems, but that does not mean that other combustion engine cars do not have extensive automation.

Automation accessories on the Model 3 include but are not limited to adaptive cruise control, lane departure warnings, and autopilot.

Everything on the Tesla is accessible to the Tesla help center, and John used the help center to find out if his vehicle was Ok or if it was something else after the outage in LaCross.

John shared many other features of the car with a gleam in his eye.

“Tesla’s giving me an opportunity like learning a new language, and I am finding out all the things I can do with it,” he said.

One demonstration he gave was playing some old-school video games, using the steering wheel as the joystick to move cars or a gun and buttons on the wheel as triggers for Centipede.

If more time had been available, John would have continued. “How much time do you have,” he asked with a smile.

The Wilson’s came to Aberdeen to see family, go to the Aberdeen Fair, and test-drive their Tesla Model 3’s long-range capability.

John said he had no worries about driving the 600 miles back home and no regrets about buying his Tesla. 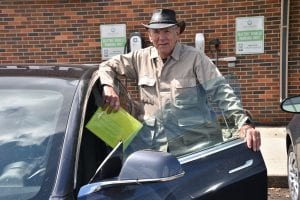 EAGLE PHOTO BY JODY RUST John B. Wilson bought his Model 3 Tesla in January 2019 and took his first long-range trip from St. Louise, MO to Aberdeen, SD with his wife Ginger M. Wilson to visit family. Here, Wilson is pictured with his Tesla charging at the Best Western Ramkota Hotel in Aberdeen. 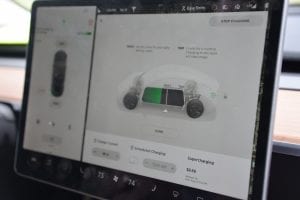 EAGLE PHOTO BYJODY RUST The Tesla Model 3 has one screen on which drivers and passengers access all of the necessary tools and accessory tools to operate the vehicle. Drivers can control how much of a charge the vehicle will take in, what music to play, autopilot options, and even video game options that can be accessed when the vehicle is parked. 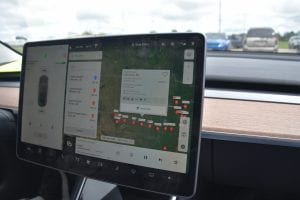 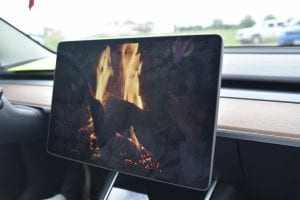 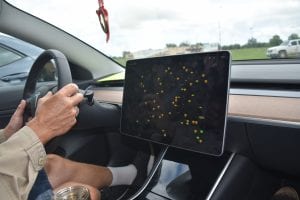