Tarita Silk is proud of her roots to Cheyenne River- her great-grandmother was from here and she lived in the “Old Chinatown” neighborhood until she was five years old. It is here that she plans to start a “core base group” for a dream she is making reality- a national walk for humanity.

She gained national media attention when she completed the first leg of her walk from her hometown of Spearfish to Rapid City on May 10.

The idea of doing the walk began with a dream, said Silk, and in it, she was given instructions from a higher power.

“It was like a mystical dream and the spirits told me, ‘This is your planet and you have to take care of it. You’re going to teach human beings about living on this planet and about love. We’re going to be right here with you. Anything you need, we’re going to provide it for you’,” said Silk.

Indeed, Silk says she has received so much support and people have contacted her wanting to know how to help and join in her work. This includes sponsorships from several tribes, including Oglala, Yankton, and Cheyenne River Sioux Tribes.

It is here on CRST that her spirit has called her, and it is here that Silk said she plans to conduct a “test walk” from Dupree to LaPlante, which is tentatively scheduled for June 6 and 7. The hope is that by doing a test walk, Silk will learn what needs to be done to accomplish a national walk from Rapid City to Washington, D.C.

“We will learn about how many miles people can walk a day, how much water is needed, what kind of medically-certified personnel are needed,” said Silk.

Silk has gone on a media campaign and has contacted state and tribal organizations notifying them about her walk. Her friend in California, Jimmy Church, who is a television host for iHeartRadio and the History Channel said he would broadcast Silk’s walk across the country. Several other media outlets have offered similar cover, said Silk.

Volunteers are welcome to help with next week’s walk from Dupree to LaPlant. Silk can be contacted on her Facebook page, “Tarita Sillk” and on Twitter. 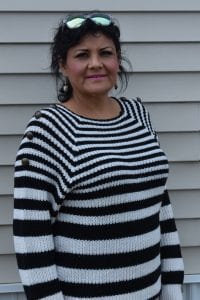