Saturday, September 29, 2019 was the second day of competition during the Lakota Nation Invitational’s inaugural football championship featuring the new All-Nations Conference play.  It was cold and rainy in Rapid City, as the Takini Skyhawks set off on a day of “firsts” for the school.

The Skyhawk fans were present and bravely faced the weather with umbrellas and rain gear, while others sat in vehicles, letting the players know they were there with honks of their car horns.

The weather came to play in this game and was as excited as the team with the 20 MPH wind playing an overbearing role in passes, kicks and snaps. The rain did its part as well, contributing to many loose footballs during the contest. It was an overbearing hurdle for the Skyhawks as they lost the contest to the Tigers, 60-0.

However, the game was a success for Takini in experience, sportsmanship, humanity and competition.

The players who took the field greeted their opponents and treated each other with respect and good sportsmanship, culminating in the collaboration with Oelrichs when the Tigers put a special player on the field to attempt a two-point conversion.

When the ball was handed to the Tiger’s player, the Skyhawks “grappled” with the Tigers and “could not” stop the attempt. It was special to see the Tigers player live in that moment, as fans of both teams cheered him on. The special momemt demonstrated to all present what teamwork and humanity are all about.

Skyhawk pride was evident after the game as parents and fans cheered the team on when the game drew to a close. It was obvious that it was not the first time this team made their supporters proud.

The Takini Skyhawks have much more work to do and some tough opponents to face in the next couple of weeks. The improvement of the team has been obvious and with players Mahki Hollow Horn, Grant Quilt, Tristan Belt, Gabriel Collins, Damion Red Elk, Blake Pederson, Kyson Crow Ghost, Tristan Collins, Kanin Hiserote, Xavier Condon, Cekpa Bald Eagle, Shayden Washburn, Logan Quilt, Johnathan Fire Cloud and Colton Condon making each play count in experience gained. As the season progresses, we can expect them to continue towards success.

Takini quarter back Mahki Hollow Horn advances the ball while an opposing player attempts to force him out of bounds. EAGLE PHOTO BY ALAINA BEAUTIFUL BALD EAGLE 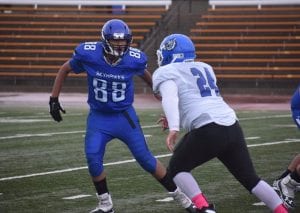 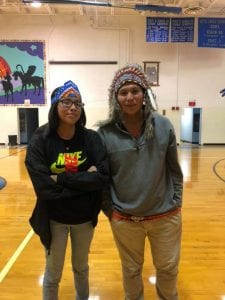 Above: Lexi Yellow Owl and Jonathan Fire Cloud are crowned this year’s homecoming Queen and King during the coronation ceremony on September 25. Lexi received a beaded blue crown and Jonathan recieved a wapaha (headdress). After the coronation, students and staff lined up to shake their hands. PHOTO FROM TAKINI SCHOOL FACEBOOK PAGE 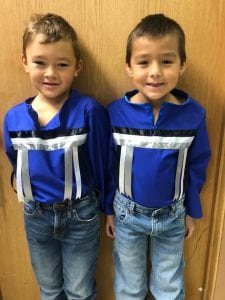 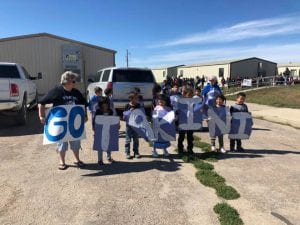 First graders hold up signs that spell “Go Takini” during the homecoming parade on Thursday, September 26. The Skyhawks played Oelrich Tigers on Saturday, September 28 at the inaugural LNI football tournament for their homecoming. Turn to page B10 for more on the game. PHOTO FROM TAKINI SCHOOL FACEBOOK PAGE