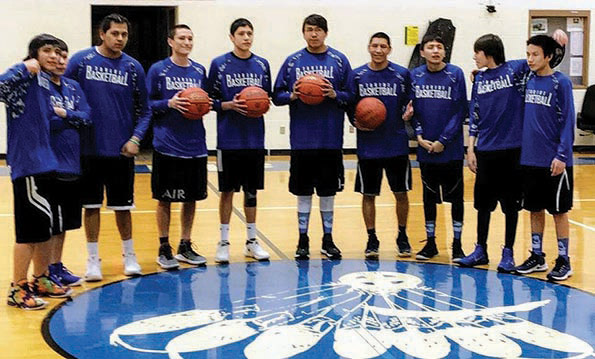 On Friday, March 2, the Skyhawks travelled to Lemmon to play against the Timber Lake Panthers. A win against the Panthers would have advanced the Skyhawks into the Round of 16 bracket, a step closer for the team to make it to the Class B state championship.

First-time head coach, White Wolf said the season started off slow for the team, but says that midseason, things began to get exciting. The team began winning more games and finding their grounding as a family.

“The boys worked hard together and began to say that ‘we are not just a team, we are a family.’ We began to support one another as such,” White Wolf said .

What made this year’s team the most successful that the school has had in years? It’s simple, says White Wolf.

“The boys know each other. Most of them are from Cherry Creek, and they all grew up playing basketball with each other,” White Wolf said.

“We had lots of support of the surrounding communities all season long. The parents and communities expressed their support at every game. They never let the team forget that they supported them,” White Wolf said .

According to White Wolf, that enormous support played a part in the team’s motivation, morale, and performance.

“It drove them. It excited them and made them happy. The support was always there, and they thrived off of it,” White Wolf said .

Although the team’s season ended with a loss to the Timber Lake Panthers, White Wolf says he is already excited for next season.

Of the twelve players on Skyhawks team, four are graduating seniors. White Wolf says he is confident that rebuilding a team will not be difficult.

Along with their winning streak, the players had success in their academics. According to White Wolf, each player kept up with their school work throughout the entire season.

Reaching the end of the season did not come without controversy, however. Many spectators and parents who watched the game against the Panthers expressed their disappointment about how the referees handled the game.

Even though players and the coach were not in agreement with calls the referees made during the Timber Lake game, White Wolf said “I couldn’t do anything as a coach except to tell my players, ‘Keep your head up. Play as a team and stick together’.”

At the end of the game, the Skyhawks suffered a loss on the court, but not in their spirits.

“Even though they had lost, they got onto the bus with smiles, encouraging one another. They sang songs on the ride home. Win or lose, they are always smiling, always singing,” White Wolf said .

White Wolf says he could not be more proud of the team’s success this season, and is already looking forward to what lies ahead for the Skyhawks.

“I tell my boys, ‘never let a loss get your heart, or your win get to your head. Just keep on striving for the best.’ And they did their best,” White Wolf said .