The Skyhawk gymnasium was filled to capacity as the Takini Skyhawks took on the Bison Cardinals at Takini’s home court on Thursday, January 9. The varsity boys Cardinals, who were coming into the game with a 0-3 record, had just, two days prior, suffered a stinging 19-83 loss against the Tiospaye Topa Thunderhawks. The Lady Cardinals, who had two wins and one loss, were favored to win against the 0-4 Skyhawks.

The doubleheader began with Bison quickly scoring the first basket, setting the pace for the quarter. Back-to back-fouls hurt Takini and resulted with multiple chances for Bison to score at the free throw line, which they capitalized on, increasing their lead 6-15. Bison continued their aggressive defense and scored more points, ending the first quarter, 6-21.

Try as they might, the Skyhawks were unsuccessful in many of their scoring attempts as the Cardinals controlled the ball in the first half. Takini struggled to respond to Bison’s full-court press, but part way through the second quarter, Takini adjusted their defense strategy by playing man-to-man coverage, slowing the Cardinals’ offensive.

Bison’s 5’10” senior Kiley Schuchard, proved to be a formidable opponent with her long reach and aggressive style of play as she secured rebounds and scored points under the basket.

In the second quarter, Takini was not able to create turn overs and could not grab rebounds, resulting in Bison pulling ahead in points; however, a 3-point shot by Takini’s Leah Red Elk, brought the crowd to its feet and reenergized the team.

In the third quarter, the Skyhawks hit the court much more aggressively, grabbing rebounds and pushing back down the court. Bison could not get their defense set and Takini capitalized, quickly bringing up the score, 29 to Bison’s 53 points.

The Skyhawks scored 23 points in the second half, and played smarter with their passes, more aggressive with their rebounds and their defense created turnovers. The second half was more competitive for both teams and ended with the final score of 33-60.

The Skyhawks traveled to Solen, ND to take on the Solen Sioux on Monday, January 13, but were unsuccessful in the matchup.

The first quarter of the boys showdown was an exciting single-digit game. Bison was successful passing the ball into their lane but were not able to make their shots, and suffered on rebounds. Takini was hungry for three points but were unsuccessful in many of their attempts and could not sink their shots. The game was fast-paced with Bison scoring a basket at the last second of the quarter, resulting in a lead on the scoreboard for the first time in the game, 7-9.

In the second quarter, Takini’s defense was tough when it tried to bring the ball down offensively. Takini also forced turnovers with many steals, and successful shots. There were a lot of fast breaks in the first half, but the team also threw away a lot of their passes.

As Takini pulled ahead an increased their lead, a discouraged Bison player threw the ball in frustration, inadvertently hitting Takini player Virgil Red Elk. The referees called a technical foul and gave Red Elk four tries at the free throw line; however, Red Elk was unsuccessful at scoring. The crowd did not, for a single second, let him forget that they were behind him all the way.

Takini continued to dominate in the fourth quarter with their aggressive and fast-paced style of play, and in the end, they secured their victory with a 61-26 score. The crowd went wild with the buzzer signally the Takini victory, and the Skyhawks quickly began shaking hands with the Bison players. The Skyhawks then invited the Cardinals to kneel with them in a circle as they began praying. In an instant, the crowd quieted and joined in the prayer.

The gathering ended with handshakes, hugs, and high-fives from both teams, as the crowd applauded the young men for their sportsmanship and respect.

The Skyhawks are now 1-1 and will host the Wakpala Sioux on January 23. 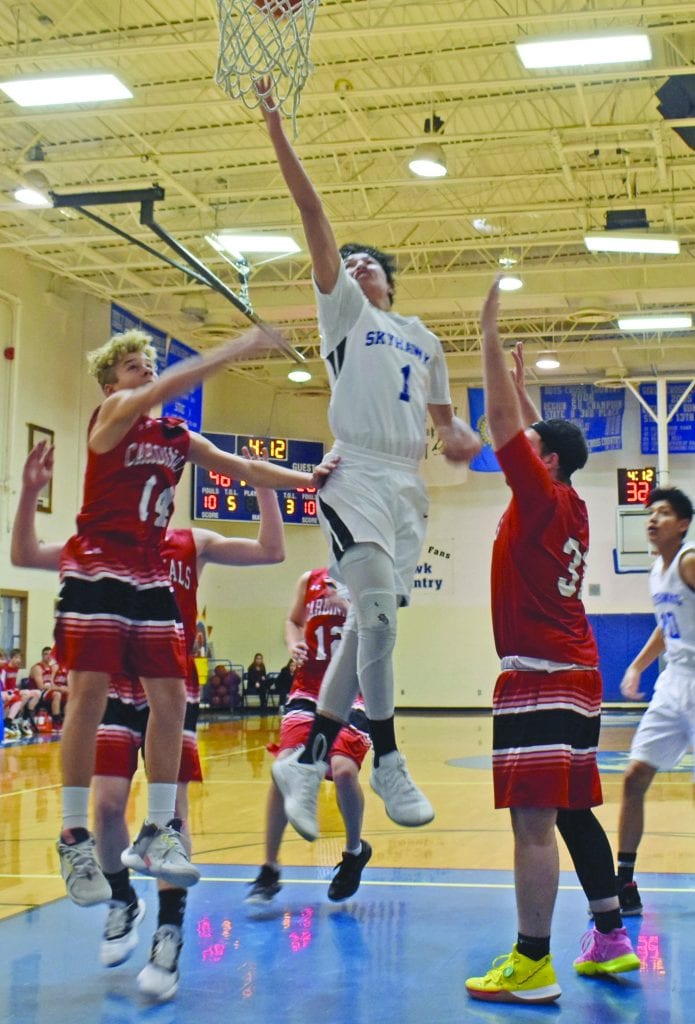 EAGLE PHOTO BY ALAINA BEAUTIFUL BALD EAGLE
Tyrus Ashley completes a layup during the home game against the Bison Cardinals on January 9. Takini was victorious in their game, scoring 61 points to Bison’s 21. 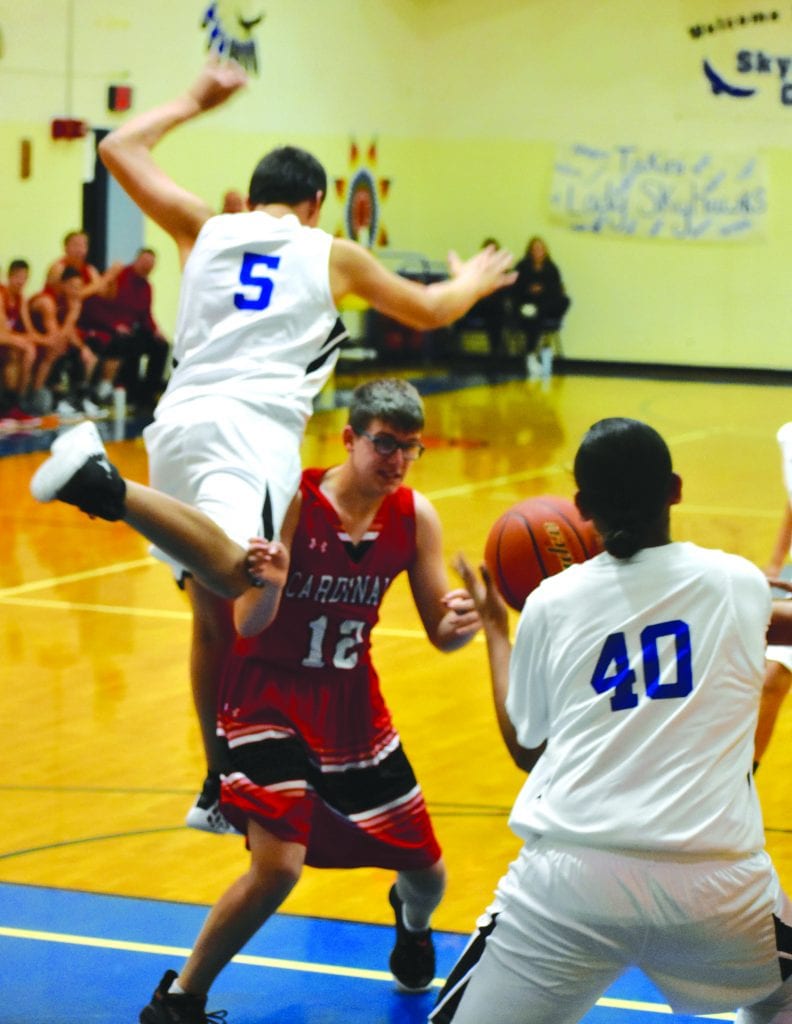 EAGLE PHOTO BY ALAINA BEAUTIFUL BALD EAGLE
Takini’s Kanin Hiserote soars in the air as he defends against a Bison player. 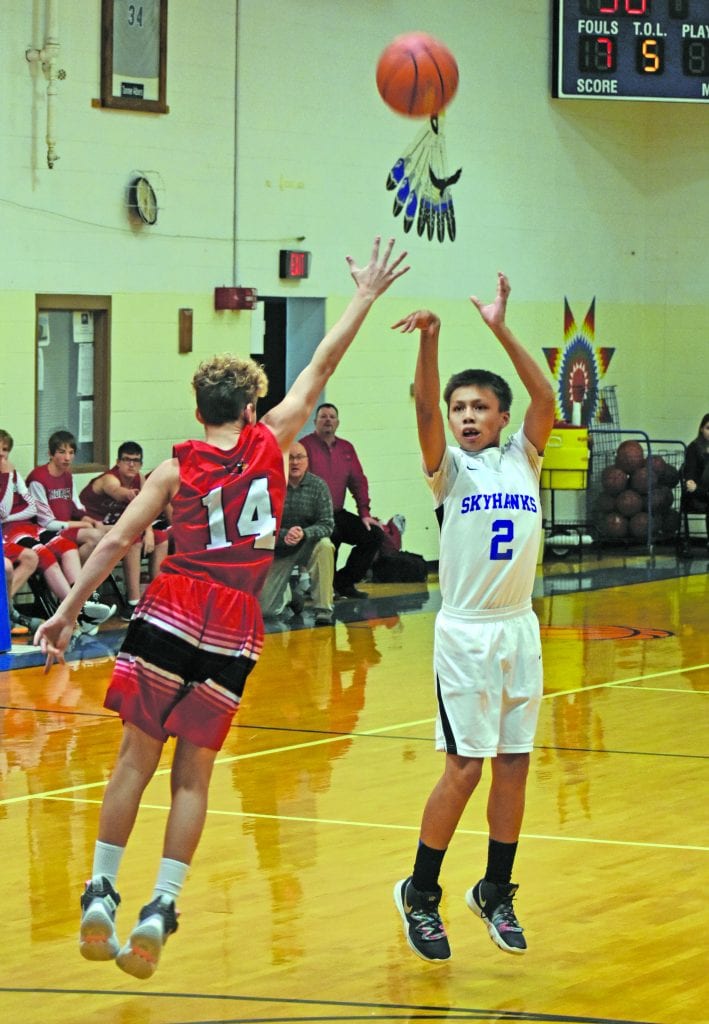 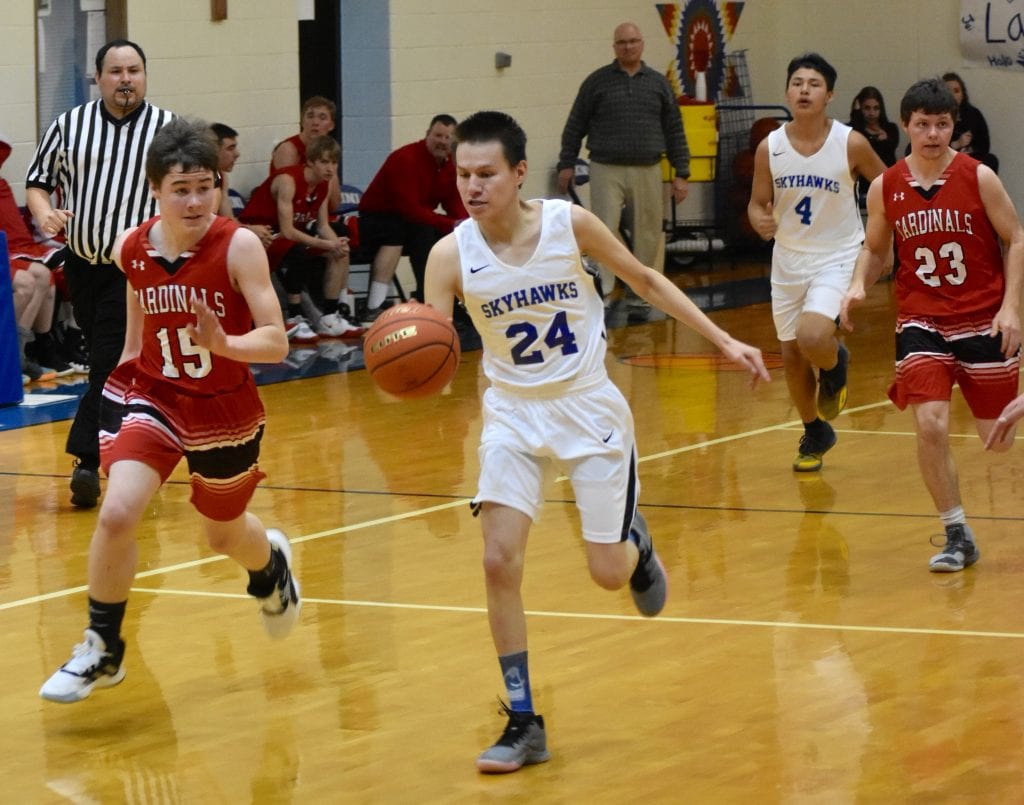 EAGLE PHOTO BY REMI BEAUTIFUL BALD EAGLE
Tyree Bear Stops of Takini drives the ball down the court during the game against Bison on Thursday, January 9. 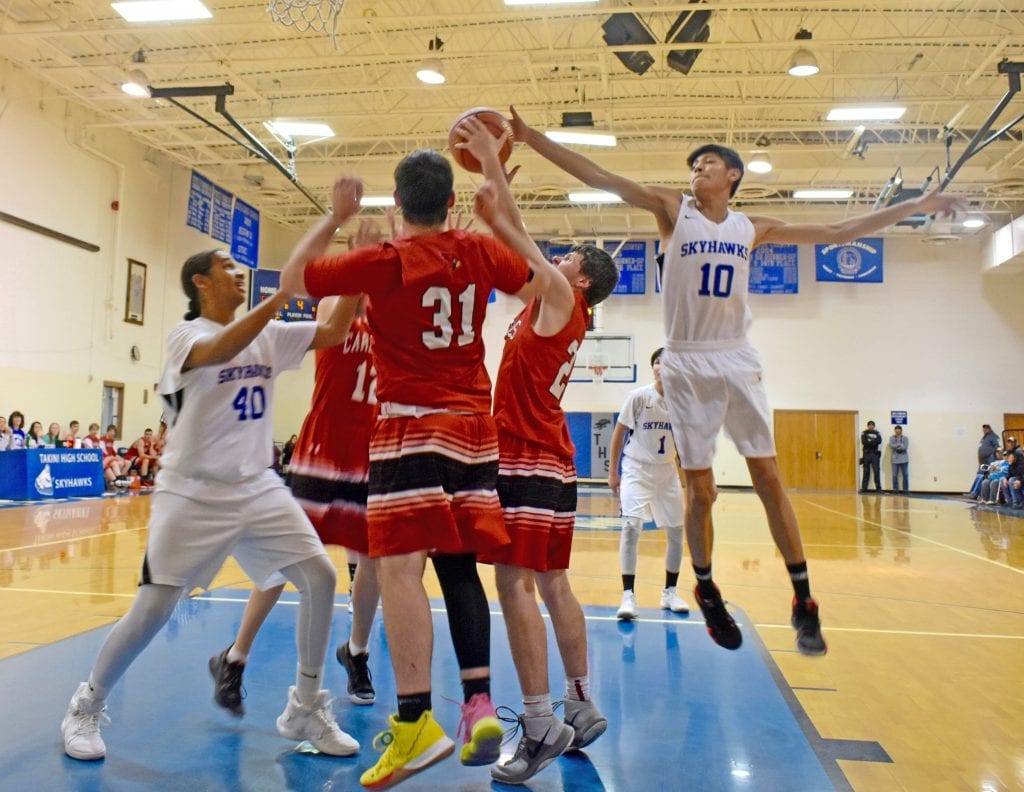 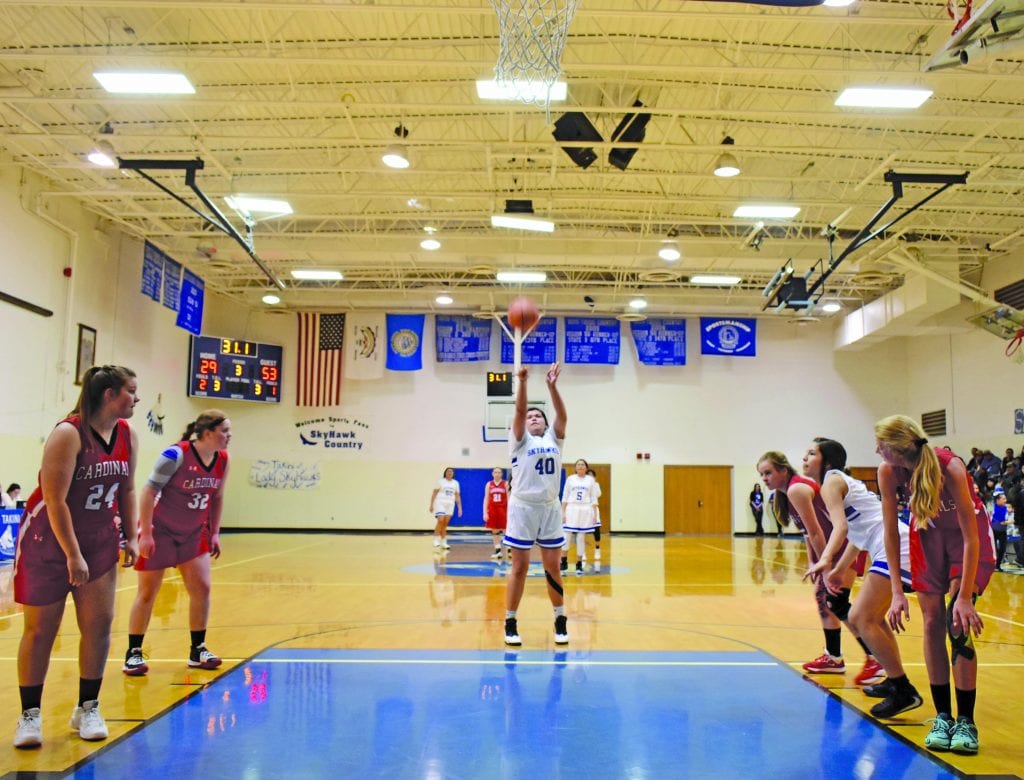 EAGLE PHOTO BY ALAINA BEAUTIFUL BALD EAGLE
Above: Takini sophomore Leah Red Elk takes a shot at the free throw line after she is fouled by a Bison player. Takini lost the matchup with a final score of 33-60. 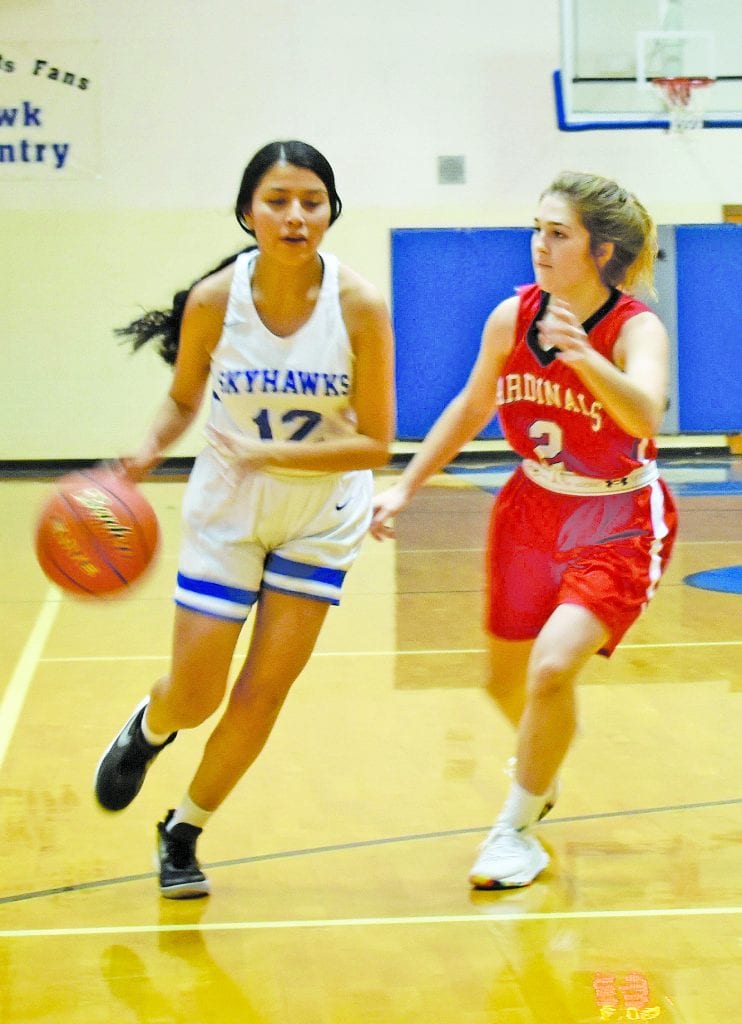 EAGLE PHOTO BY ALAINA BEAUTIFUL BALD EAGLE
Left: Lady Skyhawk Angelica Condon drives the ball down the court as Bison defender attempts to keep up. The Lady Skyhawks will take on the Dupree Tigers in Dupree on January 21.