Legislative redistricting was left stalled in South Dakota Monday after the House and Senate were deadlocked on competing proposals for a new political map. Every year after the census is completed, the South Dakota Legislature is constitutionally required to redraw its legislative district boundaries to accommodate shifts in population and ensure equal representation. The new district boundaries are in place through the state for the next 10 years. However, after 10 hours on Monday during a special session, the Republicans in the House and Senate remained divided. State law calls for the high court to determine the map if the Legislature cannot pass on by the December 1 deadline.

The House approved the restricted map of the Grouse plan, known as the Grouse 2.1 map. Conservatives in the House contend that their plan causes less disruption to existing maps and closely follows county lines more than the Senate’s proposed map.

Referred to as the Blackbird 2.0 map, the Senate approved the revised map of the Blackbird plan. The Senate’s map divides the greater Brown County and Aberdeen area into three districts while the House splits that same area into two. Around northwestern Sioux Falls, lawmakers have taken two different approaches in the way they have drawn districts as well. This distinction is most notable in District 25 and District 9.

On Monday, senators argued the House’s proposal violates federal requirements to protect the voting rights of the Indigenous people. Yet, House lawmakers claim that the Senate is intentionally pitting conservate legislators against each other in the 2022 election and beyond.

At the time that the West River Eagle went to print on Tuesday, there was no update about redistricting. Tuesday’s schedule was complicated for the Legislature for several reasons.

The Legislature was scheduled to meet in a second special session to consider the potential impeachment of Attorney General Jason Ravnsborg. House Speaker Spencer Gosch is expected to appoint eight representatives and himself to serve as a special investigating committee. It will look at evidence, possibly subpoena witnesses and eventually make a recommendation, at a later date, to the full House about whether to impeach.

The Capitol rotunda had guests on Tuesday for the memorial service for former Governor Frank Farrar. An honor guard brought his flag-draped coffin into the rotunda Monday evening.

Having special sessions on different topics on the same day caused some logistical issues for the Legislative Research Council, whose staff provide non-partisan services to lawmakers, because of the time needed to shut down one set of work and start another. 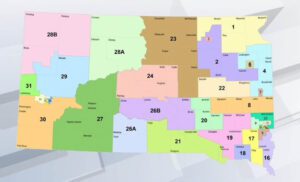 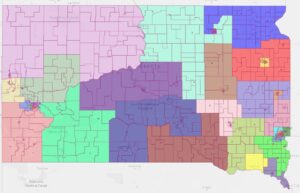 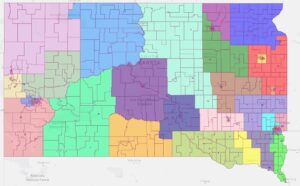