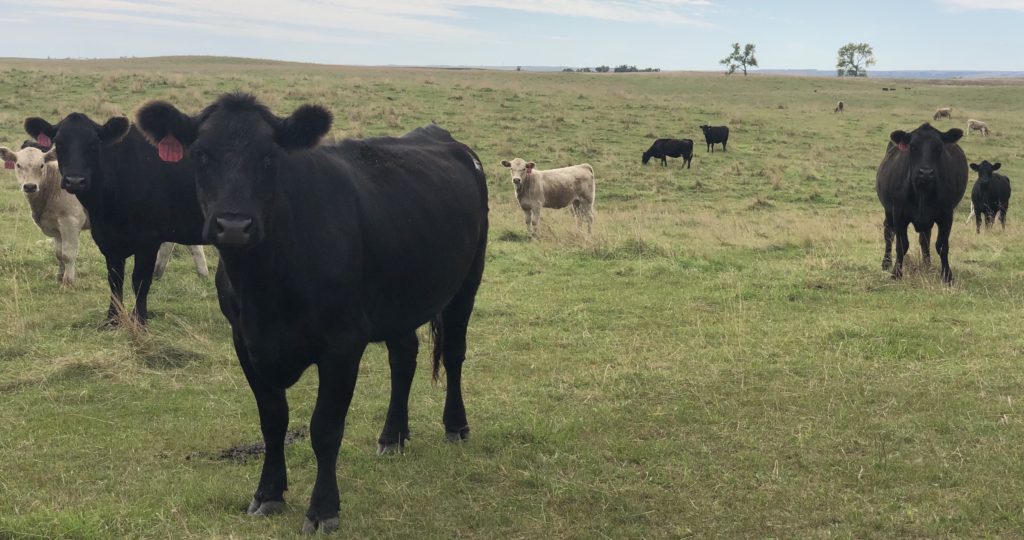 The COVID-19 pandemic has turned a bad situation for South Dakota beef producers into a crisis in which low market prices and corresponding revenue losses may force some ranchers into bankruptcy.

The spread of the virus and a subsequent need for people to isolate and hunker down in order to be safe have led to a run on beef at grocery stores and a short-term spike in demand. But livestock industry officials say that will provide only a temporary buoy to the market.

With school closings eliminating the need for student lunches, and restaurants closing around the world, the long-term prognosis for the beef industry is not good as long as the pandemic continues. The November “futures” price for beef, or the price producers expect to get in the fall when selling cattle they are feeding now, has fallen by 20% since January and is now far below break-even.

“There will absolutely be people who won’t make it out of this,” said Warren Symens, a Britton rancher who is vice president of the South Dakota Cattlemen’s Association. “At least for some of my colleagues, this will be the straw that breaks the camel’s back.”

Meanwhile, an even larger, longer-term problem for beef producers has been exposed and exacerbated by the COVID-19 crisis.

The virus has deepened inequalities in the beef wholesale market, resulting in higher prices being paid by consumers and restaurant operators, but with beef producers getting less money for the animals they raise.

Farmers, agricultural leaders and some members of Congress say that slaughterhouses and processing plants are absorbing the money from higher prices being paid by consumers and other end-users of beef products.

Until a recent improvement in prices just prior to the epidemic, the market price for beef over the past three years or so had been at or slightly below the break-even point for many of South Dakota’s roughly 14,000 ranchers who raise 3.7 million head and generate about $2.8 billion in sales each year, according to state data.

Demand has remained steady, and the price for “boxed beef,” the final product bought at grocery stores and by the restaurant industry, has been rising to near-record levels in the past year and especially since the virus has taken hold. The boxed-beef price rose by 20% in in one five-day period in early March.

But producers have been cut out of that positive equation and are not benefiting from the strong demand and growing end-point prices.

“Consumers are paying more but producers just aren’t seeing any of that,” said state Sen. Gary Cammack, R-Union Center, a cattle rancher and farm-supply store owner. “In this environment, it doesn’t seem right that that is happening.”

U.S. Sen. Mike Rounds unveiled on March 19 a three-pronged effort to help ranchers endure the crisis and to attempt to stabilize the market.

“This is a multi-billion dollar problem for South Dakota,” Rounds said in an interview with News Watch.

Rounds and others are not sure if the inequities in the market are due to unfair trade practices on the part of the beef processors or if the market system itself needs an overhaul. To help find out, Rounds wrote a letter to U.S. Attorney General William Barr on March 19 “to urge the Department of Justice to investigate continued allegations of (meatpacker) price fixing within the cattle market and to examine the current structure of the beef meatpacking industry for compliance with U.S. Antitrust law.”

Rounds noted in this letter that the four largest meatpacking companies in the U.S. control 80% of the processing market. Two of those companies, JBS and Marfrig Global Foods, are Brazilian-owned. The U.S. Department of Agriculture recently agreed to lift the ban on importing Brazilian beef into the U.S., which domestic producers worry will also damage their position in the worldwide market.

Rounds also urged President Donald Trump to initiate efforts to implement Mandatory Country of Origin Labeling into the current trade deal with Canada and Mexico. That labeling program, which was repealed in 2015 under threat of major tariffs by those countries, would enable U.S. producers to clearly label their meat products as being American-bred, -raised and -processed.

Finally, Rounds on March 20 submitted legislation that would use federal Commodity Credit Corp. funds “to offset losses cattle producers take in the live and feeder cattle markets.” That program, Rounds said, would be similar to the Market Facilitation Program that provided direct payments to farmers for losses stemming from tariffs placed on U.S. goods by China during the ongoing trade war led by President Trump.

As of March 16, 2020, that 2019 program had provided $8.6 billion to American farmers, including $524 million to South Dakota producers of corn, soybeans, dairy products and hogs, but no money to beef producers. Rounds said that if the new measure is successful, any relief would still be “several months” away for beef producers.

Rounds also said he continues to push his bill called the U.S. Beef Integrity Act, which would prevent foreign beef producers from falsely labeling their meat as a “Product of the USA” – which is being done now to confuse consumers, he said.

“In the meantime, we’ve got beef producers out there that are in dire straits,” Rounds said.

James Halverson, executive director of the South Dakota Stockgrowers Association, said the slide in the beef market would create ripple effects far beyond the struggles of ranchers to stay afloat.

“Agriculture is where everything starts in this state, and when agriculture is hurting, you’re undoubtedly going to see trickle-down effects in our economy,” Halverson said.

Halverson said ranchers are feeling the same worry as everyone else when it comes to COVID-19, but that the stresses are compounded by knowing that their animals may not generate the revenue they should.

Halverson said ranchers are proud and usually eschew any financial bailout efforts, but he said the current crisis may require some government help.

Symens said that unlike producers of hard goods, ranchers cannot put production on hold or keep their products in storage until the pandemic is under control and the crisis has passed. And in the meantime, bankers and mortgage companies demand payments even in a market downturn.

“It’s not like grain or soybeans or cell phones or cars; you can’t park cattle there and leave them and wait,” Symens said. “Every day he stands there when he’s ready, you’re losing profit.”