Highly-anticipated SoDak 16 volleyball action showcases the grit and talent of volleyball teams from across the state. In Cheyenne River Region 8B action, #8 seed Takini Skyhawks hosted #9 seed McIntosh Tigers for Round 1 on Monday, November 4. Tigers defeated the Skyhawks in three sets: 14–25 McIntosh, 19–25 McIntosh and 10–25 McIntosh. The game ended Takini’s season with a 6-8 record

That same night, #6 seed Dupree Tigers and #11 seed Tiospaye Topa Thunderhawks were scheduled to face off in Round 1, however, the Thunderhawks forfeited, resulting in the Tigers advancing to Round 2. Dupree played against Lemmon on Tuesday, November 5.

#2 seed Timber Lake was pre-advanced to the second round and took on the #7 seed Bison on Tuesday night as well.

In Region 6A, the #5 seed Cheyenne-Eagle Butte Braves took on the Crow Creek Chieftains Tuesday evening. Results from the tournaments will be published in next week’s edition. 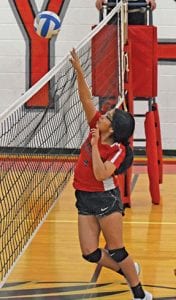 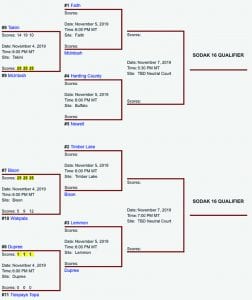