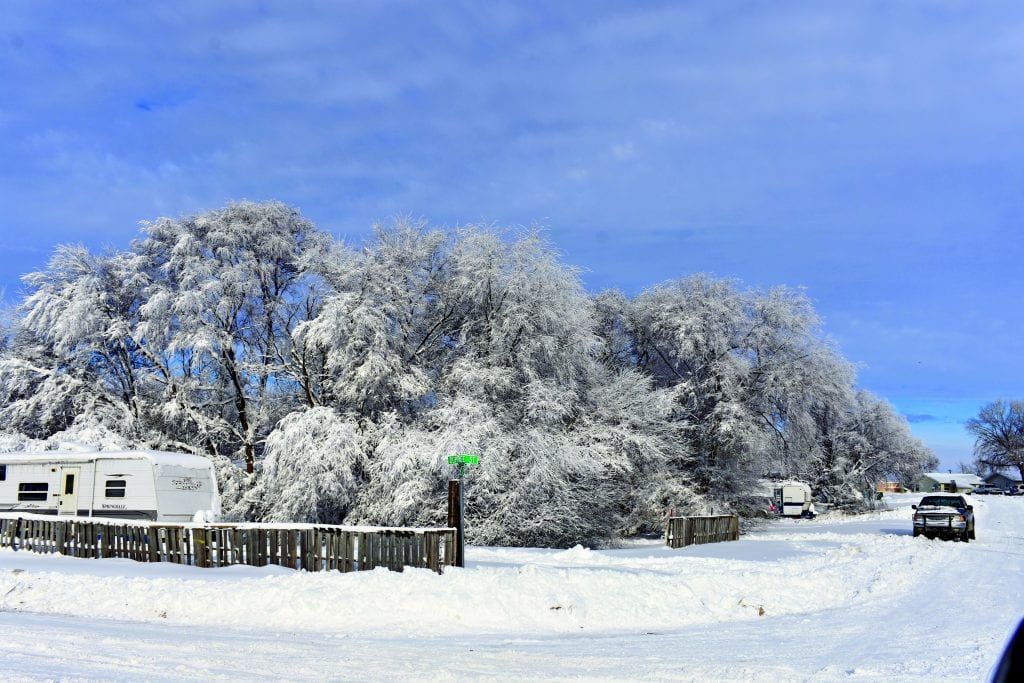 The US National Weather Service out of Rapid City estimated that the Cheyenne River Sioux Reservation area received between 7-10 inches of snow and predicted wind gusts over 40 MPH.

On Wednesday evening, stores across Cheyenne River were filled with customers who were shopping last minute for Thanksgiving ingredients and for emergency supplies such as candles, diapers, space heaters, and water.

The clouds rolled in on Thanksgiving Day and very little snow was reported; however, heavy snow began to fall on Friday and the winds picked up. As the day progressed, freezing drizzle and high winds caused blizzard conditions and icy roads across most of the state.

The Dewey County Sheriff’s Office Facebook page posted that people stay home but if they must travel, to do so at slow speed. Later that day, the CRST Command Center issued a No Travel Advisory with a notification that plows were out and sanding and salting highways. The post also stated that should travelers get stuck, they should stay in their vehicle.

“If we can safely rescue you, you will be taken home or to a safe place and the vehicle you used will be towed.” Furthermore, the post stated, drivers who get stuck could face fines associated with the rescue operations and could face civil and criminal penalties for not adhering to the No Travel Advisory.

People were routinely sharing road updates on the CRST Road Conditions Facebook page, including journalist Robert Slocum who posted a photo of vehicle accident west of Faith, and that roads were getting icy.

As conditions across the state deteriorated into the evening, the South Dakota Department of Transportation announced it was closing Interstate 90 from the Wyoming state line to Chamberlain. The DOT also warned drivers that state highways and country roads were not any better and urged people to stay put.

Wind gusts reportedly reached 63 MPH in some parts of the state and snow accumulation continued throughout the night, causing snow drifts and icy road conditions.

Over one feet of snow reportedly fell in the Black Hills causing power outages in over 15 counties across the state, and Black Hills Energy reported more than 1,600 customers were without power. West River Electric customers also suffered outage.

Saturday morning revealed a winter wonderland with a No Travel Advisory still in effect on CRST. The Eagle Butte Community Club announced that the annual Parade of Lights was postponed due to the weather, and the Eagle Butte Snow Queen Pageant was rescheduled to the following Saturday. Some business in Eagle Butte closed their doors early.

In Chamberlain, a single-engine plane crashed shortly after takeoff on Saturday morning. There were reportedly 12 people on board the Pilatus PC-12 aircraft, and only three survivors who were rushed to various hospitals for medical treatment. The cause for the crash is still under investigation; however, Chamberlain was reportedly under a winter storm warning at the time of the crash.

By Sunday morning, the winds had calmed, and the sun shone. The CRST Command Center issued a public service announcement that plows were clearing major highways first, afterward they were to work on secondary roads.

Throughout the day, there were numerous people posting on the CRST Road Conditions page asking when plows would clear roads in their communities and inquiring about conditions of roads through CRST and the state.

Julie Thorstenson asked about the condition of Highway 212 going west because her daughter, Tayla needed to get on the road to return to Laramie, WY for school. Later that evening, Julie gave an update on Tayla’s travel.

“She ended up going through Gillette to take the interstate most of the way. She said Gillette to Douglas was bad and she was driving about 40 miles per hour, but after that it was better,” she said.

Several posts and comments on Facebook also stated that the CRST Command Center voicemail was full, with no option to leave a message.

On Sunday evening, there was a power outage in Green Grass that lasted for a couple hours. The CRST Command Center also issued notification that their phone was experiencing technical difficulties and asked people to call 911 if there was an emergency.

The National Weather Service reported that November was a record-breaking month for the Rapid City office. It broke the all-time record for the highest snowfall for November and was the third wettest November on record.

“We were very fortunate because we didn’t get any major calls. But winter’s just beginning,” said Arpan.

Cheyenne River Sioux Tribe Lieutenant of the Police Joseph Brings Plenty Sr. said that his officers responded to 91 calls during the storm. He encouraged the public to remain diligent and prepared throughout winter.

“We encourage people to plan ahead and prepare themselves. Check weather updates, check propane levels. If there is a No Travel Advisory in place, please stay home and stay safe. There is an added risk to law enforcement when people travel during No Travel Advisories. We understand that is part of our job, but we also have volunteers who come out to help. It doesn’t take long to freeze- it only takes fifteen minutes. If people need help, give us a call,” said Brings Plenty.

EAGLE PHOTO BY ALAINA BEAUTIFUL BALD EAGLE
Main Street in Eagle Butte was busy with traffic on Monday morning. Although the road was plowed, snow pile up in the center of the road caused one-lane traffic. 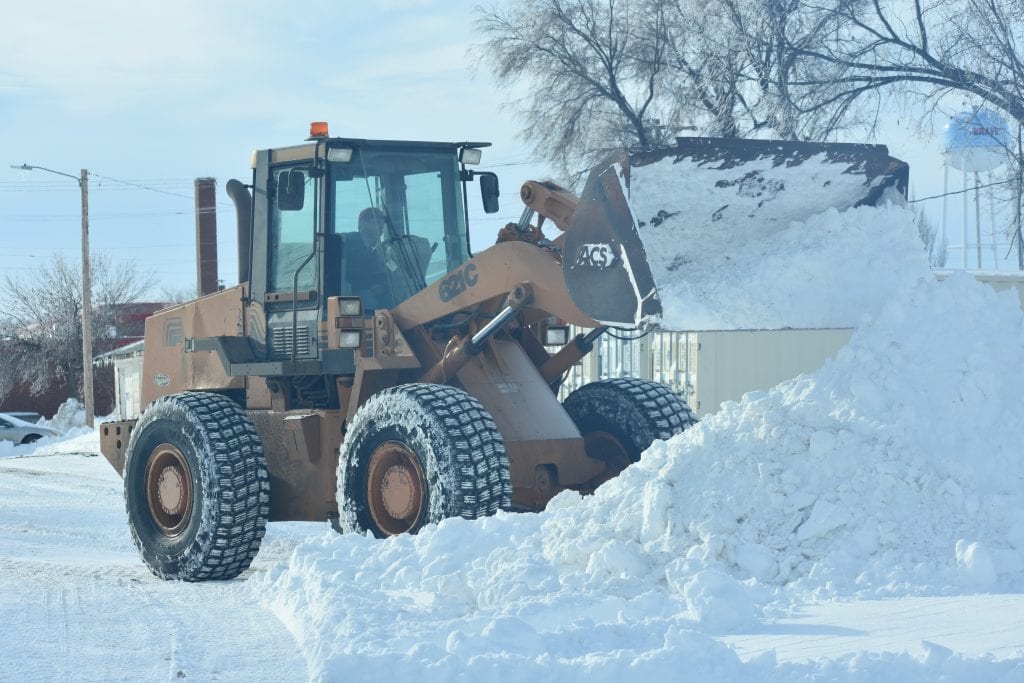 EAGLE PHOTO BY ALAINA BEAUTIFUL BALD EAGLE
Bulldozers and other implements were busy removing snow on Monday morning as school and work resumed after the snowstorms over Thanksgiving weekend. 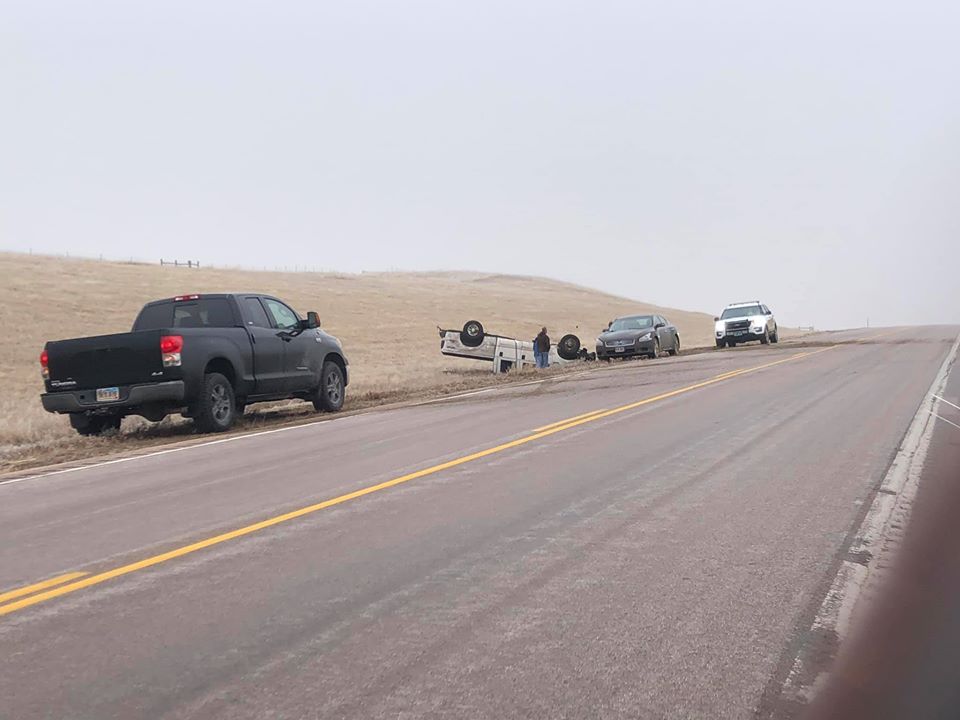 PHOTO BY ROBERT SLOCUM
Bulldozers and other implements were busy removing snow on Monday morning as school and work resumed after the snowstorms over Thanksgiving weekend.