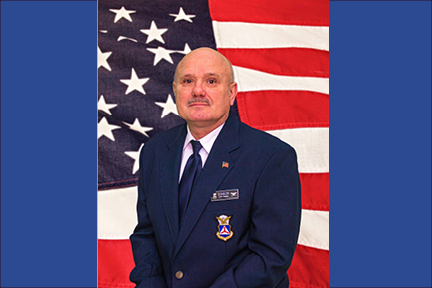 Ken Schuler is the son of Twila Schuler and the late Willie Schuler of Dupree.

Ken Schuler of Grand Forks, ND has been appointed Commander of the North Dakota Wing Civil Air Patrol and promoted to the grade of Colonel. He took command through a virtual ceremony with participants from three different states on the April 4.

The North Dakota Wing is comprised of seven squadrons from around the state and is comprised of 106 cadets and 178 senior members. The wing operates seven aircraft and one glider supporting the Civil Air Patrol’s three primary missions: Cadet Programs, Aerospace Education and Emergency Services.

Since assuming command, the North Dakota Wing has been actively supporting the state’s Department of Emergency Services during the COVID-19 pandemic. To date, the wing has utilized aircraft and vehicles to distribute COVID-19 test kits to rural towns, has flown 6,800 test kits to Bismarck from out-of-state locations, and has transported live test swabs to the State Department of Health for laboratory processing.

They have also transported over 10,000 masks and numerous boxes of gloves donated from various locations throughout the state.

Schuler is a 24-year US Air Force veteran who retired in 2006. He graduated from Dupree High School in 1981 and entered active duty service after graduating. He has deployed in support of Operations Northern/Southern Watch, Enduring Freedom, Desert Shield/Storm and the Iraq War.

Through numerous deployments around the world during war and peace, he has earned medals for his service. Whether deployed or at home, Schuler always found the time for continuing education. He is an Embry Riddle Aeronautical University graduate with a bachelor of science in professional aeronautics and a minor in safety.

The Dupree alum is an avid aviation enthusiast– he owns an aircraft and is currently building another in his garage. He is also an active model airplane builder and flyer. Schuler holds an FAA airframe and powerplant license with inspection authorization and is a 2,800-hour private pilot with instrument.

Schuler is married to wife, Regina, and has two daughters, Heather and Ashley, and currently resides in Grand Forks. He is the son of Twila Schuler and the late Willie Schuler of Dupree.