The training consists of various ways in which a staff member can address an aggressive or violent encounter with another student or staff member, including learning ways to deescalate an agitated person and ways to protect oneself from a physical attack with escape moves.

“You’re held to a higher standard,” Mareska told the staff members, gathered at round tables in the C-EB High School gymnasium.

Each attendee received a booklet through which they worked as Mitchell and Mareska took turns presenting the material, providing scenarios, mental and physical actions and reactions, and strategic steps for addressing behaviors that would lead to the quickest outcomes with the least harmful results to all involved.

Mareerska emphasized that educational employees sign a contract and are held to a higher standard than other people in other positions because they work with community youth.

The CPI training helps the staff members to conduct themselves in more effective and professional ways in the workplace with colleagues and in dealing with crisis situations involving students.

The first portion of the training was primarily book work, and then Officer Mitchell and Mareska demonstrated and gave staff members a chance to practice breaking holds should they be attacked. 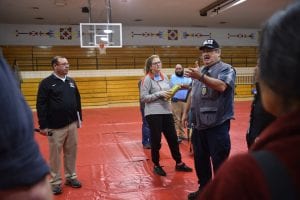 EAGLE PHOTO BY JODY RUST At the joint CPI training, including staff from C-EB, Takini and TTS, Officer Donnie Mitchell explains techniques to safely break a hold if physically attacked by a someone.