Scary, adorable and funny strut their stuff at Firemen’s Ball 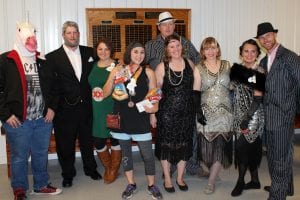 There were a lot of terrific costumes in the age 13 to adult category. Winners were L to R: Robert Lemke for ‘Scariest/Ugliest’, Trent Vandermay and Katelyn Hump took ‘Most Humorous’, Molly Longbrake was a ‘bread winner’ winning ‘Most Original’, and ‘Most Adorable’ winners were Shalyn Hawley, Boyd Stambach (back), Kristan Stambach, Jaci Etzkorn, and Steven Heberlein. Photo by Patty Peacock 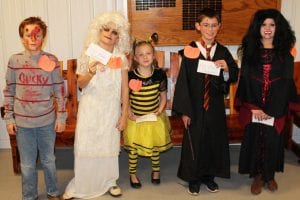 Kids, ages 7-12 years old, who were voted best costumes at the Dupree Masquerade Ball were L to R: Tee and Cruz Birkeland dressed as ‘Chucky and the Bride of Chucky’ for ‘Most Humorous’, Laney Bakeberg’s bee costume took ‘Most Adorable’, Radley Grueb got ‘Most Original’ for Harry Potter, and the ‘Scariest’ went to Trinity Leithauser. Photo by Patty Peacock 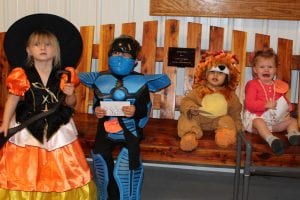 Taking home cash prizes in the costume contest for kids ages 0-6 were L to R: Salem Stambach for ‘Most Original’, Kip Longbrake for ‘Scariest/Ugliest’, Sariah Farlee with ‘Most Adorable’, and ‘Most Humorous’ went to Paizely Holmes who was dressed as an ‘old lady with a walker’. Photo by Patty Peacock 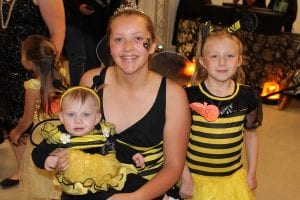 An interesting costume choice this year was a ‘bee’, There was one bee entry in each of the three age categories. After the contests the ‘bees’ posed for a photo op. L to R: Kodi Bakeberg, Malory Peacock as a ‘queen bee’, and Laney Bakeberg. Photo by Patty Peacock